A long and widely-read article by Shany Littman in Haaretz last week examines the phenomenon of far-left academics and activists who emigrated from Israel and are now living and working abroad (“After Losing Hope for Change, Top Left-Wing Activists and Scholars Leave Israel Behind,” May 23). One of the Littman’s interviewees is Yael Lerer, who moved from Israel to Paris and works in the field of publishing. In Israel, Littman writes, Lerer “spearheaded attempts to draw Israelis and Palestinians closer together from a civic and cultural point of view.”

According to Littman and Lerer, the trigger that led to Lerer’s departure was a violent incident in which Lerer’s life was allegedly in grave danger. Littman wrote:

In 2013, Lerer returned to Israel for a time and was a Knesset candidate on behalf of Balad, in the 12th (and unrealistic) place on its list. While taking part in a panel discussion ahead of the election at Netanya Academic College, she was the target of a violent attack by rightists. The other panel participants did not come to her defense, she says.

“A violent attack by rightists,” as Littman writes, is definitely a traumatic experience that could drive the victim to leave the country. In the article, Lerer describes the incident as follows:

“It was almost a lynching,” she recalls. “It’s a lucky thing there were security guards. I’d always thought that even if I received hate messages and threats of murder, it would only be on the web, but that in real life no one would do anything really bad to me. Suddenly I understood that I could no longer count on that. I understood that Israel had become a dangerous place for me.” 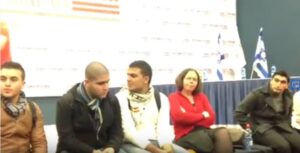 A screenshot from Lerer’s YouTube video, after the alleged “almost a lynching.” Lerer is second from right

“Almost a lynching” is truly a terrifying, life-threatening incident. According to Merriam-Webster, “lynch” means: “to put to death (as by hanging) by mob action without legal approval or permission.” But before sighing a breath of relief and sending our gratitude to the brave security guards who saved Lerer from the horrors of Netanya College, we checked for additional accounts of the almost lynch. Had such a violent incident taken place at an academic college, it would have been widely reported and documented at the time. Tellingly, though, we found not a single shred of evidence pointing to a violent attack on Lerer. To the contrary, a detailed Facebook post by then Knesset member Stav Shaffir, who also participated in the panel, told a very different story.

Shaffir’s post described a crowd that chanted, yelled and prevented Lerer from speaking her mind as some of the panel’s members fanned the flames. However, Shaffir, who was entirely disgusted with the disruptive audience, made not a single mention of physical violence or any attempt of violence. She wrote about her efforts to calm the situation and her demands that Lerer be permitted to speak. In other words, her account contradicts Lerer’s claim, as faithfully recounted by Haaretz‘s Littman, that “The other panel participants did not come to her defense.”

Moreover, Yael Lerer’s own video footage of the incident contradicts her claims of violence and “almost a lynching.” The following appears on Lerer’s YouTube channel:

Additional videos of the disrupted panel posted on Lerer’s YouTube channel also do not show any sign of violence. For one moment (here, minute 7:47), a man from the crowd goes on stage and approaches Lerer, and is immediately escorted off without incident.

Without question, many of those present in the room did not like Lerer or the things she said. They also didn’t bother to hide their dismay. But there was no attempt to use violence against her, and there was certainly no “lynch” attempt, “almost” or otherwise.

Presspectiva, CAMERA’s Hebrew site, contacted Shany Littman to inquire about the disparity between her description of the incident in Netanya Academic College as a “violent attack by rightists,” versus what the evidence shows. As of this writing, she has yet to respond.