For video of the exchange between CAMERA and Amnesty, see bottom of the article.

On April 22, Amnesty campaigner Maen Hammad participated in a panel at Harvard Palestine Solidarity Committee’s “Israeli Apartheid Week.” Amnesty’s participation in the weeklong event, which included a number of vocal antisemites, warmongers, and other radicals, itself shows the depths to which a once-respected organization has fallen.

Notwithstanding the questionable company Amnesty now keeps, CAMERA took the opportunity to ask Amnesty’s Hammad about a pair of figures, presented as important evidence of “inhumane acts” by Israel, in Amnesty’s “apartheid” report.

First, CAMERA asked about the report’s claim that 4,236 Palestinians are in Israeli prisons. But, as CAMERA has already pointed out, even assuming the accuracy of this figure, it would mean an incarceration rate about on par with that of Europe, and less than half the incarceration rate in the Americas.

Second, and even more significantly, Mr. Hammad was pointed to Amnesty’s claim that 4,868 Palestinians were killed “outside armed conflict.” However, when one looks at the source in the footnote, this is not what was actually being claimed by Amnesty’s source. Instead, the source claimed 4,868 Palestinians “who were not taking part in hostilities” were killed. As CAMERA previously explained, these are two very different statements, as the latter – referencing specific legal terminology relating to the laws of armed conflict – includes all of those who were tragically killed during the armed conflicts between Israel and terrorist groups in the Gaza Strip over the last two decades.

Civilian deaths during armed conflict, especially in the challenging circumstances the Israeli Defense Forces face, is a tragic but unavoidable reality, particularly in light of the tactics employed by groups like Hamas which use populated areas to fire rockets at Israeli civilians. While the deaths of civilians in war time is no less tragic, the context is important to take into account, especially when making accusations of “apartheid” in which questions of intent are highly relevant.

Yet, to bolster its charge of “apartheid,” Amnesty, either through ignorance or malice, changed the wording to: (1) erase the context of armed conflict (which directly conflicts with a narrative of “apartheid”); and (2) make it appear as though Israel was going around freely killing thousands of Palestinians during peacetime.

Hammad’s response: “Those are like extremely specific numbers that I would need to see…we had over 1,500 footnotes in our report.”  When reminded that those are not just random numbers, and that they form an important part of the “key allegations” in Amnesty’s report, Hammad deflected and instead asked for the CAMERA representative’s email address so as to respond later.

Notably, Hammad’s initial response is the same excuse Amnesty’s MENA research and advocacy director, Phillip Luther, used to dodge a question from Times of Israel reporter Lazar Berman. When confronted about another set of questionable figures, whether Jews living in the Jewish Quarter were counted as living in an “illegal settlement,” Luther hid behind the length of the report and responded, “The specific figures I’d have to go to… they’re all footnoted…”

Well, CAMERA looked at the footnote and found the statement was ultimately unsupported. An email was sent on the morning of Tuesday, April 26 to the address for Amnesty’s “Israel-OPT” office provided by Mr. Hammad, requesting a response by the “end of this week (4/29).” 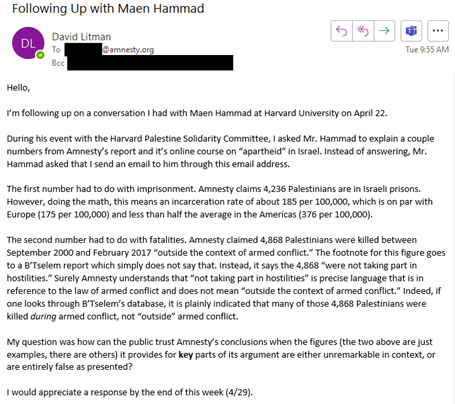 As of this writing, neither Mr. Hammad nor the Amnesty Israel-OPT office has responded. Despite being given time to review their own report and their own sources, Amnesty still has no actual answer to the questionable figures it used to demonize the Jewish state.

This all exposes a fundamental truth about reports from organizations like Amnesty and Human Rights Watch (“HRW”). As explained by legal expert Avi Bell, “the length of the report is an important part of HRW’s [and Amnesty’s] strategy of marketing its propaganda as ‘research.’” Bell continues, quoting Winston Churchill, that “the report’s length ‘defends it well against being read.’”

Taken a step further, the use of “1,500 footnotes” gives a façade of credibility. This façade, however, quickly crumbles the moment one critically examines the footnotes and the corresponding sources.

The interaction exposes another fundamental truth about organizations like Amnesty and HRW. Gone are the days of their commitment to credibility and speaking truth to power. Instead, they have embraced radical political causes, including one that declares that a Jewish state, and only a Jewish state, has no right to exist.

Given that they have refused to explain or correct blatantly false statements they’ve been alerted to, Amnesty is seemingly willing to use knowingly dishonest means to accomplish its bigoted desired end: the destruction of the Jewish state.