The aim of the journal Molecules, which describes itself as “the leading international peer-reviewed open access journal of chemistry” is to “provide rigorous peer review and enable rapid publication of cutting-edge research to educate and inspire the scientific community worldwide.” To that end, Dr. Mindy Levine, an accomplished chemist who is currently an associate professor at Ariel University in Israel, was invited to guest-edit the January 2021 edition of Molecules devoted to the topic of her research, under the title, “Advances in Organic Fluorophores: Design, Synthesis, and Applications” and posted a request for submissions. 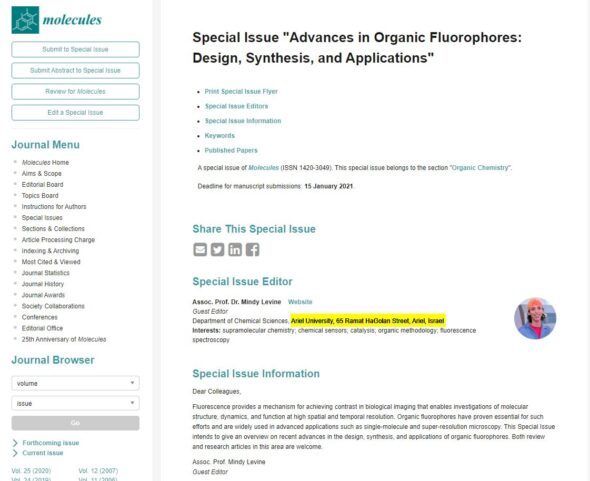 BDS activists, however, objected to the geographical location of Dr. Levine’s university in Ariel, Israel (highlighted in yellow), which they designated as “an illegal Israeli settlement… deep within occupied Palestinian territory.” They wrote a letter to the journal, expressing how “deeply disturbed” they were “by the choice of someone from an illegal institution as a guest editor of a Molecules Special Issue.” They demanded that “at the very least, the professor’s affiliation” should be changed to “Ariel University, illegal Israeli settlement of Ariel, Occupied Palestinian Territory” and that “all potential contributors should be explicitly made aware of Ariel University’s status as an illegal institution and of its role in perpetuating a war crime, given that the editor, not merely a contributor, is from that institution.” They expressed confidence “that a considerable number” of contributors would be “equally disturbed” by the choice of someone from Ariel University as guest editor.

The BDS activists at the forefront of the campaign to cancel Dr. Levine’s edition of Molecules are George Smith, a professor emeritus at the University of Missouri who was the recipient of the 2018 Nobel Prize in Chemistry, and Malcolm Levitt, a professor of physical chemistry at University of Southampton.

Smith uses his prestige as a Nobel laureate to further his non-academic, anti-Zionist pursuits. To that end, he uses his bully pulpit to promote boycott of Israel and the elimination of a Jewish state, substituting anti-Israel canards and BDS propaganda in place of expertise and scholarship. Upon becoming a professor emeritus at the University of Missouri in 2015 and resting on his previous laurels as Distinguished Professor of Biology, he attempted to present an honors tutorial class called “Perspectives on Zionism” in order to accelerate his BDS activism. Arousing great controversy, the university accepted Smith’s plan, but was ultimately forced to cancel the class for lack of enrollment. Since retirement, Smith devotes his energies to promoting BDS propaganda in any manner he can — through lectures, petitions, articles and letters — and is a member of multiple BDS groups. On the advisory board of the BDS group “No Ariel Ties” that specifically targets Samaria’s Ariel University for academic boycott, he spearheaded the effort to cancel Dr. Levine’s guest editorship. (For more about George Smith’s radical anti-Jewish state activism, see here.)

Malcolm Levitt, is of a similar ilk. A Fellow of the Royal Society who is recognized for his work on nuclear magnetic resonance, Levitt uses his scientific authority to promote radical anti-Zionist positions. Like that of Smith, Levitt’s anti-Israel activism seems rooted in a profound ignorance of history and the issues underlying the Palestinian-Israeli conflict, coupled with an eagerness to parrot BDS talking points without the scientific onus of substantiating any of his claims. He too promotes the dismantlement of Israel as a Jewish state and has signed, promoted and publicized many BDS letters and petitions, for example, here, here, here, and here. Ironically, despite their own personal achievements in empirical research, these scientists suppress intellectual reason and forego the scientific burden of proof in order to indulge their personal, antagonistic emotions against the Jewish state.

In response to the BDS campaign, Molecule journal’s editors asked Dr. Levine to remove the designation of Israel from her university’s address, which she declined to do, and temporarily removed her page from the website.

“The scientific journal Molecules has taken steps to avoid normalization of Ariel University, an Israeli academic institution located in an illegal Israeli settlement in the occupied Palestinian territory in violation of international law.

They went on to triumphantly declare that as a result of the author’s refusal “to correct her affiliation,” the journal “was forced to withdraw the special issue, which has now been removed from its website.”

Unhappily for the BDS activists, however, their achievement turned out to be transitory. On October 5, the journal posted an announcement explaining the removal of the website and expressing the desire to discuss the situation directly with Dr. Levine and Ariel University. The page was reinstated — with the author’s full geographic affiliation — and the announcement was updated two days later to express the journal’s “Statement of Political Neutrality with Regards to Affiliation of Scientists at Ariel University”: 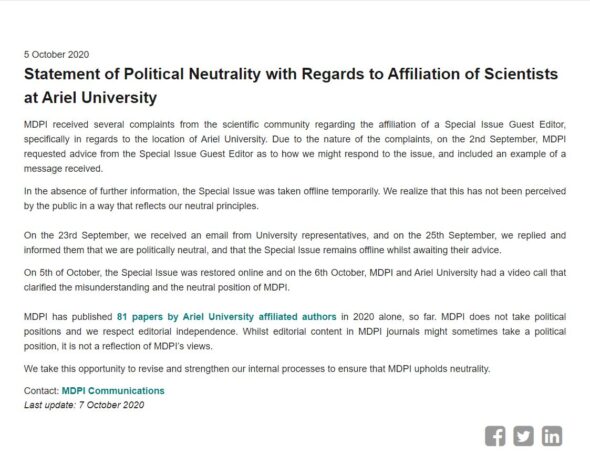 As of this writing, the “No Ariel Ties” BDS group has not altered its jubilant announcement of success.