CAMERA’s Israel office today prompted correction of an Associated Press article which overstated the rate of covid-19 vaccinations in Israel. Yesterday’s article,”China says it aims to vaccinate 40% of population by June,” erred: “Ranked first in the world in terms of percentage of population is Israel, which has vaccinated over 90% of its people. The U.S. has vaccinated about 22% of its population. “ 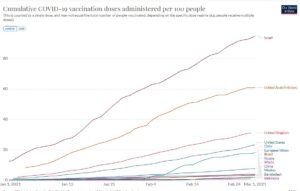 Published comparative data (by country) makes clear that these figures refer to the number of doses administered, and not the number of people who received the vaccine. The Our World in Data table entitled “Cumulative COVID-19 vaccination doses administered per 100 people” clarifies: “This is counted as a single dose, and may not equal the total number of people vaccinated, depending on the specific dose regime (e.g. people receive multiple doses).”
As of a couple of days ago, just over 50 percent of Israel’s population had received at least one dose, and more than a third also received the second. In the U.S., 15.3 percent of the population received one or more doses, and 7.7 percent received two doses.
In response to communication from CAMERA, AP today republished the story, correcting the figure regarding Israel’s population, not the U.S. The amended article states: “The fastest to vaccinate is Israel, which has given 94 doses per 100 people. The U.S. has vaccinated about 22% of its population.”
A correction appended to the bottom of the article appearing on secondary media outlets which picked up the AP story states:

This version has been updated to CORRECT that the figures of doses administered per 100 people in China, Israel and the United States is not a percentage of their populations since many people vaccinated have received both of the two doses required.