Not for the first time, Hamas has stated it would accept a state in the West Bank and Gaza Strip. Again, the terror organization made clear that, with or without any such state, it would continue its struggle against Israel’s existence. And yet again, a news organization wrongly announced that Hamas has accepted the “two-state solution.”

In late February, Palestinian media reported that a letter was sent by the Palestinian Authority to the US State Department, which focused on the subject of planned Palestinian elections. One line in the letter stated that all Palestinian factions, including Hamas, are committed to a Palestinian state in the West Bank and Gaza Strip. The Israeli news site Ynet reported on the letter under the headline, “In letter to Biden, PA and Hamas commit to two-state solution on 1967 lines.”

But the Palestinian letter said nothing about a two-state solution (or any other solution) to the conflict. The idea that a Palestinian faction might accept a state in the West Bank and Gaza Strip and use that territory as a base to continue the fight against Israel’s existence isn’t new. That is the essence, for example, of the 1974 “10-point program” adopted by the Palestinian National Council. In 2006, when there was talk about Hamas accepting a state in the West Bank and Gaza Strip, Hamas made clear that it viewed such a stated as a mere stage toward replacing Israel, and that in no way meant the organization recognized Israel’s legitimacy. (“By saying ‘1967 land,’ it was never meant to be recognizing Israel,” a Hamas spokesman explained at the time.)

In 2011, the New York Times insisted that Hamas accepted a two-state solution, something the organization made clear — shortly before the article was published, repeatedly after its publication, and even in the body of the article itself — was untrue.

And now, again, Hamas leaders are clear in asserting that their acceptance of a state in part of the territory they demand doesn’t mean they accept an Israeli state in the rest of it.

Hamas will join any list that endorses the armed resistance. Palestine is Muslim-owned and no one is entitled to give up one inch of it. (Senior Hamas official Fathi Hammad)#PalestinianElection2021 pic.twitter.com/rxxXOd2HQX

Hamas: We did not mandate any Palestinian individual or party to speak on our behalf; our political and national positions are well known and clear. They are expressed in our official documents and various publications, and not through any letter here or there.

Hamas’s clarifications are perfectly consistent with the text of the purported letter. Again, the idea of a phased plan in which a Palestinian state in the West Bank and Gaza would be a stage in the “liberation” of all of Israel isn’t new, even if it continues to “baffle” some journalists.

Unlike its headline, the actual of the Ynet story, by Elior Levy, refrained any claims about Hamas accepting a two-state solution. The piece did, however, appear to embellish the content of the Palestinian letter when claiming that “The memo also asserted the factions’ continued commitment to ‘popular peaceful resistance’ until a Palestinian state is founded.” The text of the letter as published by a Palestinian news organization includes no qualification suggesting an end date an end to any resistance.

Ynet has refused to correct either of its errors.

The Palestinian letter, as published by Amad news service, follows (click to enlarge): 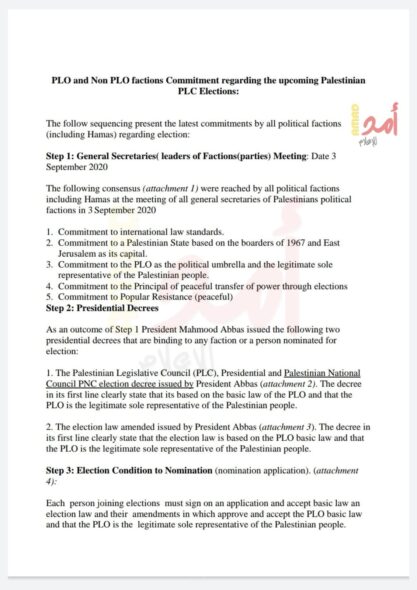