MSNBC and its parent company, NBCUniversal, have been under a spotlight lately for poor coverage of Israel and Jews in both their news and entertainment divisions. A March 3 segment on MSNBC’s evening news program The Beat with Ari Melber, while a significant improvement over some of that network’s past coverage, still contained numerous material omissions of critical facts about Israel, the Palestinians, and the Covid vaccine.

The overall tone of Melber’s segment on Israel and the vaccine was favorable, accurately portraying Israel as a world leader in vaccinating its public. Viewers learned – some of them probably for the first time – that Israel is about the size and population of New Jersey, and Israel’s universal health care system was lauded.

Melber reported, “Israel now has the record for fastest vaccination campaign across the world. Nine out of ten seniors vaccinated, over half the population has at least one dose.” 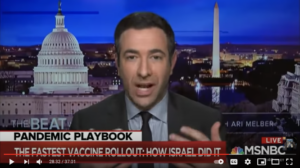 After introducing his guest, Wall Street Journal reporter Felicia Schwartz, he correctly shared that, “something that’s gotten some notice as we look at this country and this example, Israel will begin, they say, vaccinating Palestinians with Israeli work permits this weekend, and they provided the Palestinian authority with, they say, 2,000 vaccine doses. Another 3,000 coming, but there are another four million Palestinians in the West Bank and Gaza.” He then asked Schwartz, “this has been widely debated as a piece of the wider conflict that everyone, I think, is familiar with in the region. What is your reporting and what is your view on the equities and human rights considerations there?”

So it’s been a huge debate here. Beginning this Sunday, Israel will vaccinate, it’s about 120,000 Palestinians who have Israeli work papers. They either work inside of Israel or in Israeli settlements. And it’s been the recommendation of health ministry officials as well as Israeli companies who employ Palestinian workers one, to vaccinate these workers, but also to vaccinate the West Bank and also Gaza more broadly for both humanitarian reasons, but also because these societies are very commingled. And, I think it’s the WHO and others like to say, no one is safe until everyone is safe. So I’m not sure where this debate will come down, but there is obviously a long history of conflict here, and there are sensitivities involved, but there is a lot, I think, under way.

It’s unfortunate, though, that Melber passed up the opportunity to debunk some of the false claims made by others on his network that, for example, Israel is “not doing what is their required obligation to do for them and so Palestinians are suffering,” or that if Israel is “not offering vaccinations to Palestinians, there’s no way for Palestinians to get it.”

It’s also unfortunate that the two reporters chose to ignore the fact that, as reported by the Jerusalem Post in December, the PA stated at that time:

We are working on our own to obtain the vaccine from a number of sources …. We are not a department in the Israeli Defense Ministry. We have our own government and Ministry of Health, and they are making huge efforts to get the vaccine.*

They ignored, too, that of the first few doses to arrive in the Palestinian territories, many went to “government officials, the Jordanian royal court and the Palestinian national soccer team,” news that reportedly “infuriated many Palestinians.”

While Melber’s coverage does represent an improvement, it still falls short in terms of balanced coverage of Israel and the PA.

*Notably, after Melber’s program aired, the Jerusalem Post reported that, “Israel plans to prioritize the vaccination of the entire Palestinian population aged over 16, once it has inoculated its own citizens and receives surplus doses.”