But while the Biden administration reversed several ”unlawful and ill-advised” Trump policies, he said it has been slow to act, especially on the U.S. commitment to reopen the U.S. consulate in east Jerusalem which would restore Washington’s main diplomatic mission for the Palestinians in the contested city. 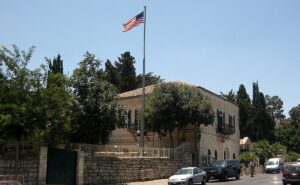 The Agron Street building which had housed the US consulate in Jerusalem, including the Palestinian Affairs Unit (Wikimedia photo by Magister)

In fact, the Palestinian Affairs Unit of the U.S. consulate in Jerusalem was located on Agron Street, in the western part of the city, not in east Jerusalem.

Reuters and Haaretz have previously corrected the identical error.

In response to communication from CAMERA, AP commendably removed the erroneous reference to the eastern part of the city. The corrected text now refers to “the U.S. commitment to reopen the U.S. consulate in Jerusalem.” CAMERA’s quick follow up in the same news cycle meant that secondary media outlets which carried the AP story, such as US News & World Report, published the correct information.