In response to communication from CAMERA, MSNBC added an Editor's Note to the online broadcast noting the police's information that a crowd of rioting Palestinians threw rocks at the tow truck. See below for a detailed update.

MSNBC's Ali Velshi broadcast yesterday, entitled "A Shepherd's Resistance," is a grotesque propaganda roadshow which abandons any vestige of professional, objective journalism, both regarding the particular case of Al Haj Suleiman al-Hathaleen and the larger issue of Israel's presence in the West Bank. The anti-Israel parody of journalism would have been right at home at Al Jazeera, Velshi's former employer, and its appearance on the American outlet is a red flag to any news consumers still hoping for broadcasts that inform as opposed to inflame.

But the harassment continues. The goal was and always is to get Palestinians to leave the land, allowing more Israeli settlers to populate it. And it came to a head days ago. On the afternoon of January 5th, Israeli forces entered Haj Suleiman's village of Um El-Khair, and began confiscating unregistered Palestinian cars. Haj Suleiman did what he had done for decades. He peacefully resisted. Then he was run over by an Israeli tow truck under contract to the Israeli police. Haj Suleiman was on the ground battered and bleeding. Israeli officials say Suleiman charged at the truck. Witnesses say, and there were many of them, say otherwise. What happened next was the real tragedy. Witnesses say the tow truck driver and their police escort simply fled the rural village. They did not render aid to Suleiman, they did not even call for an ambulance. The protester Al Haj Suleiman al-Hathaleen never emerged from his coma and he died of his injuries this week.

Velshi's emotive account, untethered as it was by mundanities like facts and journalistic ethics, disregarded the professional imperative to "diligently seek subjects of news coverage to allow them to respond to criticism of allegations of wrongdoing."

Had Velshi upheld his journalistic duties, as had Reuters, he would have reported that the police operation to remove unregistered vehicles was not an embodiment of Israel's alleged nefarious population replacement plan, but was an effort to protect both populations, Palestinian and Israeli alike. Thus, Reuters reported:

Villagers said vehicles that police had sought to tow away were bought from Israelis at low cost after they failed to pass annual roadworthiness inspections in Israel.

Thus, Velshi recasts an effort to safeguard life by keeping unroadworthy vehicles out of circulation as nothing less than an Israeli population transfer scheme.

Strikingly, if population transfer into the West Bank — moving in more settlers to displace Palestinians — was really Israel's goal, then it's been doing a mighty dismal job of fulfilling it. An April 2021 Haaretz report about the "dwindling stream of new residents" into the West Bank found:

Those who value the settlement enterprise might also be disheartened by recent data. In 2010, the annual growth rate of the Jewish population in the West Bank was 5 percent, thanks to the addition of nearly 16,000 new residents each year. But the uptick has tapered off steadily since then, to a nadir of 2.6 percent last year – slightly more than 12,000 newcomers. And nearly 11,000 of them were babies, most of them born not in the scattered hilltop locales but in the Haredi cities of Betar Ilit and Modi’in Ilit. Apparently relatively few new people are choosing this way of life, or perhaps the number of newcomers is being offset by the number of leavers.

Velshi's depiction of the circumstances around al-Hathaleen's fatal injury is no less deceptive, casting the shepherd as a Moses-like figure armed only with his words, staff and Palestinian flag as star in a purely pastoral, non-violent scene which would make Ghandi blush.

Velshi's elliptical treatment of the Israeli's police's account about Palestinian activity during the incident — ("Israeli officials say Suleiman charged at the truck") — is cover up, not coverage. Haaretz, in contrast, reported the police's response in full, providing a picture that is not quite as bucolic as the MSNBC reporter would have viewers believe. Haaretz reported:

According to police, dozens of Palestinian were blocking the road to stop the tow truck and throwing stones at the Israeli force. The driver was hit in the head, and the truck's windshield was shattered. …

The police stated on Wednesday that “a Palestinian who apparently ran toward the tow truck was injured," but on Thursday described a "violent riot... that put the force at risk."

"While the forced headed out, as stones were being thrown, one of the rioters sprinted toward the tow truck, fell to the ground and was injured," the police said. "Given the situation that emerged, in which an agitated mob tried to cause real harm to the force, it was impossible to stop and assist the injured person." 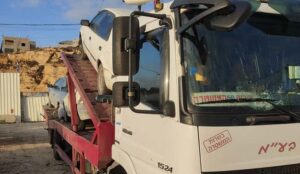 Moreover, Haaretz published a photograph provided by the police showing the tow truck's shattered windshield, reportedly smashed by Palestinian stone-throwers.
(Haaretz was also at odds with Velshi's statement that Suleiman Hathaleen "never emerged from his coma," having reported that his brother said Suleiman "was unconscious for several minutes.")
Velshi introduced al-Hathaleen with an equally dishonest account of land ownership in the disputed West Bank. His soliloquy of selective and fabricated history begins:

Imagine this: You and your family live on land that you've owned for decades, maybe even close to a century. You live a simple, peaceful life in a small village within a community of people you've known for as long as you can remember. And then seemingly out of nowhere, a new group of people build their own village right on your village's land. Not like neighbors, though, rather they are intent on displacing and replacing you. They build their homes on your land with the sanction of the government and the protection of the military. Now there's barbed wire where your sheep used to graze.
Now you live in the shadow literally of homes that look like they were transplanted from 21st century America to your rustic village. All while you and your fellow villagers lack basic necessities like land to grow food, water and electricity. Still, you'd be one of the lucky ones because your home, humble as it may seem, remains standing and for now you're still allowed to live in it. Almost weekly, you watch government forces demolish houses, confiscate property and arrest your neighbors. That's what's happening right now to Palestinians in the occupied West Bank. It's been happening for years. The West Bank was occupied by the Israeli army during the 1967 war. International law forbids countries from settling on lands that they occupy as a result of a conflict if there's no treaty or agreement in place about the transfer of control of that land. But Israel disputes that interpretation of international law and asserts its rights in the West Bank, actively promoting what the rest of the world sees as illegal settlements on land taken from Palestinians, often with the support of the United States.
All Palestinians in the occupied territories live under Israeli military rule. Even in those areas that are nominally under the political control of the Palestinian Authority. And as Israel continues to confiscate what little Palestinian land is left under false pretenses every year. Now, according to the Palestinian Bureau of Statistics, as of 2019, more than 688,000 Israeli settlers live in 150 settlements which are spread disruptively across the West Bank and east Jerusalem. The man right here is al-Haj Suleiman al-Hathaleen,

Vishal's sweeping notion that the disputed West Bank is "Palestinian land" is a falsehood that has been corrected over the years by leading media outlets such as The New York Times, Washington Post, Voice of America, Los Angeles Times, Wall Street Journal and Deutsche Presse-Agentur.
As for the charge that Israeli settlements are gobbling up privately-owned West Bank land, that too is baseless. The ostensibly landmark 2006 report on that question, published by anti-settlement watchdog Peace Now, was discredited. Peace Now's designation of  86.4 percent of the land on which Israeli settlement Maaleh Adumim sits as privately owned Palestinian land erred by a margin of 15,900 percent; the actual figure was 0.54 percent. Similarly, land owners in Revava won their libel suit against Peace Now, proving that the organization's figure for privately owned Palestinian land in their community was also vastly overstated.
Velshi's characterization of Palestinians at large losing control of their land and their lives since Israel gained control of the West Bank from Jordan in 1967 turns history on its head, as he claimed: "All Palestinians in the occupied territories live under Israeli military rule, even in those areas that are nominally under the political control of the Palestinian Authority."
The reality is no portion of the West Bank was ever under control – even partial – of any Palestinian government until Israel signed the bilateral Oslo Accords in the 1990s. Before Jordan's illegal occupation which started in 1948, the West Bank was part of the British Mandate, and prior to that it was under the control of the Ottoman Empire.
It's not incidental that Velshi neglected to mention that Palestinians never controlled the West Bank prior to the Oslo Accords. Had he done so, it would have undermined his argument about the illegality of Israeli settlements in the West Bank, as the international law in question refers to "occupation of the territory of the High Contracting Party," a situation not relevant in the West Bank (and Gaza) case.
Velshi's dismissal of Area A as "nominally under the political rule of the Palestinian Authority" is further propagandizing. According to the Oslo Accords, Area A is under Palestinian security and civil rule. While Israel can and does enter Area A for security operations (with the knowledge of the Palestinian Authority), that territory is actually — not nominally — under full Palestinian Authority political rule, thereby scarred by the failure to hold elections in more than 15 years. Area A covers all the major West Bank cities, and therefore includes more than 90 percent of West Bank Palestinians.
Velshi concluded that al-Hathaleen had "become a symbol of the resistance, and an emblem of that Israeli occupation." No doubt al-Hathaleen means just that for many Palestinians. But in adopting this Palestinian symbol, Velshi's "Shepherd's Resistance" broadcast is an emblem of the abandonment of ethical journalism in favor of partisan activism. Like a rock colliding with a glass windshield, his MSNBC broadcast shatters the century-old code of professional journalistic conduct.

In response to communication from CAMERA, MSNBC has added the following Editorial Note to the digital broadcast. It states:

EDITORIAL NOTE: Subsequent to their initial statement about the incident, Israeli Police released a second statement that counters what eyewitnesses reported. Here is the second statement in full: “During enforcement activity against mashtuba (unregistered) vehicles, carried out by police forces together with a tow truck in the service of the police, near the village of Umm Daraj, a violent disturbance by rioters who are local residents broke out against the forces. The movement of the tow truck and of the police vehicle was blocked, and stones were thrown at the police officer and at the tow truck driver in a way that endangered the force. In response, an IDF fighter who was posted in the police vehicle fired into the air. As the forces moved to leave while stones were being thrown at them, one of the rioters jumped on the tow truck, fell to the ground and was hurt. In the situation that was created, in which a militant mob concretely tried to harm the force in question, it was impossible to stop and assist the injured person. The Israel Police and the IDF take a very grave view of this attempt to harm the security forces and hamper routine activity, and will act with determination to impose governance.”