The latest case of “Ha’aretz, Lost in Translation” occupies a prominent position in yesterday’s paper. “Border Police caught on video beating elderly Palestinian man” was the dramatic headline in the English edition of Ha’aretz, both in print and online. The online edition also included the sub-headline: “Clip shows Faraj Sub-Labn, a man of around 60, collapsing on the ground after being shoved onto a parked military vehicle near his home in the northern Jerusalem village of Dahiat Al-Barid.” Here is a screen of the headline as it appears as of publishing time:

Many readers skim the news, reading only the headlines. So most would not bother with the more detailed article, which mentions nothing about a “beating.” Rather, the first paragraph of the article states:

A video showing Border Police officers manhandling a Palestinian man in East Jerusalem while carrying out arrests in a Palestinian village outside Jerusalem on Thursday was been posted on YouTube after being recorded by one of the man’s neighbors. The clip shows Faraj Sub-Labn, a man of around 60, collapsing on the ground after being shoved onto a parked military vehicle near his home in the northern Jerusalem village of Dahiat Al-Barid. (Emphasis added.)

The article continues further down:

“Get your hands off of me,” the police officer screamed, before shoving Sub-Labn backward. . . .

“I’m standing in front of the house and I tell him you’re not coming into this house, you don’t have permission,” Sub-Labn related, at which point the commander jumped at him and shoved him at one of his soldiers, who forced him onto the armored vehicle. (Emphasis added.)

“They dragged me along the ground, threw me, and I lay on the ground,” he said.”

In other words, while the more visible headline speaks of a “beating,” the less visible, more detailed article describes pushing, but no beating. What actually happened in the video? Curious English readers have no way of knowing. Unlike earlier articles describing videos documenting Israeli violence, Ha’aretz‘s English online article yesterday neither embeds the video nor provides a capture image from or link to the video. Instead, the online English edition includes an unrelated photograph of border policemen in Jerusalem. The Hebrew article, in contrast, helpfully does embed the YouTube video. The video shows a policeman shoving Sub-Labn. It does not show any beating.
As mentioned earlier, yesterday’s English coverage of the Sub-Labn incident is not merely a case of an unsubstantiated, inaccurate headline. It’s also a classic example of “Ha’aretz, Lost in Translation,” a phenomenon in which English translators add erroneous information about alleged Israeli misdeeds which did not appear in the original Hebrew article, and in which the English translators downplay Palestinian violence and belligerence reported by their Hebrew-speaking colleagues.
Here is the Hebrew headline:
It means (CAMERA’s translation): “Border policemen push and injure a 60-year-old man during the arrest of suspected stone throwers.” The subheadline reads: “The man, a resident of east Jerusalem, tried to prevent the police from entering his house to arrest a suspect, was pushed towards a jeep and required treatment. His son was sprayed with tear gas. Watch the documentation of the incident.” What are the differences between the Hebrew and English versions of the headline and subheadline? 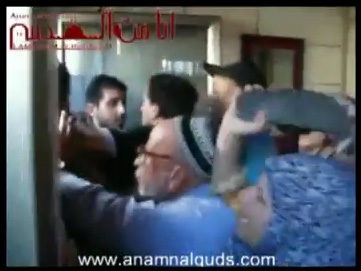 Furthermore, the Hebrew article provides additional information about the circumstances of the incident, stating that the commander’s order to his people, “We’re going in,” “elicited a riot, with family members and neighbors trying to protect the suspect while the force tried to get inside.” (A screen capture of the video showing the riot is at left. Sub-Labn is wearing
a blue shirt and glasses.) Nowhere does the English article mention that relatives and neighbors tried to interfere with the arrest. In one final discrepancy between the English and Hebrew, the English article repeatedly uses the unclear language claiming that Sub-Labn was shoved “onto” a parked military vehicle, suggesting that either 1) he was thrown into the vehicle; or 2) he was thrown on top of the vehicle. The Hebrew, in contrast, is far more precise and consistent with the video, stating that Sub-Labn was pushed “towards” the police vehicle (second paragraph), and the commander pushed him “towards one of his soldiers who was standing behind him, and this hurled him towards the underbelly of the armored vehicle” (fifth paragraph).
Apparently, the Ha’aretz translator simply could not resist. Perhaps recalling the international headlines generated by earlier videos showing Israeli forces or settlers striking, kicking or shooting Palestinians, the temptation was too great. Why write “pushing” when “beating” is so much more compelling?
See the Hebrew version of this article at Presspectiva.
Donate Now