The New York Times‘ April 3 article, “‘Like a Miracle,’ Israel’s Vaccine Success Allows Easter Crowds in Jerusalem,” paints a picture of a lively, crowd-filled Easter in Jerusalem, buoyed by Israel’s vaccine success, alongside the presumably empty churches and streets in nearby Bethlehem, in the Palestinian Authority. About Jesus’s birthplace, where the vaccine is less available, readers would reasonably conclude — wrongly — that, unlike Jerusalem, there were no crowds in churches, no celebrations on the street.

Regarding Jerusalem, “it was as if the pandemic never happened,” begins Patrick Kingsley, the Times’ Jerusalem bureau chief, as he describes a city humming with the Good Friday procession that is part of Easter festivities: the winding passages “were packed with over 1000 worshippers;” “crowds once again [came] to the city’s streets;” “the city’s streets were once again thrumming with activity;” “At the gathering point for the procession on Friday, there was scarcely space to stand;” “Then the crowd moved slowly off . . . “

In the digital edition, the photographs graphically reinforce the crowded, vibrant and soulful Jerusalem scenes, with no less than six photographs depicting crowds of worshipers during the Good Friday procession, in which believers carry the cross and follow the path they believe to be Jesus’ last steps down the Via Dolorosa and into the Church of the Holy Sepulcher (at left) on the way to his crucifixion. A seventh image, of police officers, also emphasizing the crowds, carries the caption: “Israeli police officers provided security and crowd control.”

The Easter holiday scene in the nearby holy city of Bethlehem, readers would understand, is categorically different. About Bethlehem, Kingsley writes:

The mood among Christians a few miles away, in the Palestinian cities of Bethlehem and Ramallah, was even less jubilant. Christians in the occupied territories can visit Jerusalem only with a special permit, which has become even harder to procure during the pandemic. While most Israelis are now vaccinated, the vast majority of Palestinians haven’t received a dose. 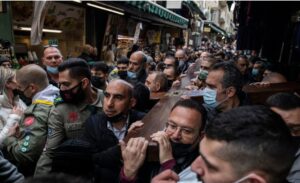 The dichotomy is clear. “[T]hanks to Israel’s world-leading vaccine rollout, religious life in Jerusalem is edging back to normal,” thus the crowds of faithful in Israel’s capital. “It’s like a miracle,” as Rev. Amjad Sabbara, a Roman Catholic priest, put it. In Palestinian Bethlehem, on the other hand, where the vaccine availability is still limited, there are no crowds, readers would inevitably conclude, and Kingsley fails to inform them otherwise. Kingsley does not mention any crowds or gathering in Bethlehem, much less refer to them multiple times, as he does in his Jerusalem procession coverage. Nor does the article include any photographs of Bethlehem gatherings. The Times’ neglect, though, doesn’t mean that the events didn’t happen.

While the Friday procession is an event observed annually every year specifically in Jerusalem, and there is no procession in Bethlehem on the Friday preceding Easter, it is not at all true that there are no Easter crowds in Jesus’ birthplace this year. Numerous photographs from Getty Images show crowds gathered in churches on Easter Sunday. In addition, several other images from the news agency show families enjoying Easter from clowns and bunnies on the streets of Bethlehem, which Kingsley describes as “even less jubilant.” “Palestinian Christians celebrate Easter with a clown and a bunny on April 3, 2021 in Bethlehem, West Bank,” read the captions to Samer Hazboun’s photographs of Easter revelry.

On Palm Sunday, March 28, hundreds gathered both in Bethlehem and Jerusalem. Times of Israel had reported:

Additionally, Christians gathered for Mass in the Church of the Nativity, in the West Bank city of Bethlehem, traditionally believed to be the birthplace of Jesus.

Palestinian Christians clutched olive branches in accordance with Palm Sunday tradition, and sang through their masks.

Associated Press photographs depicted worshipers at mass in Bethlehem’s Church of Nativity during Palm Sunday.  As Reuters reports, “on both sides of the Holy Land, as the Christian calendar progressed from Christmas to Easter, the faithful began to turn out again in greater numbers” (“Wider View: A Drone’s Eye View of the Holy Land as Christians Look to Easter,” March 31.)

Thus, contrary to The Times’ implication, crowds did gather in Bethlehem to celebrate Easter.

In addition, Kingsley is similarly elliptical when it comes to the permits granted to West Bank Christians to visit Jerusalem this Easter. As quoted above, the reporter noted the special permit “has become even harder to procure during the pandemic.” And further down, he writes:

Either way, infection rates are still high in the occupied territories and vaccination rates are low — and that has limited the number of Palestinian Christians granted permission to enter Jerusalem for Easter this year. A spokesperson for the Israeli government declined to reveal the final number.

“Without permits, we cannot come,” said the Rev. Jamal Khader, the Roman Catholic parish priest in Ramallah. “It’s a sign of the continuous presence of occupation and the limitations on movement.”

But Christ’s crucifixion and resurrection still provide spiritual nourishment for a despondent population, said Father Khader, who is allowed to enter Jerusalem through his work with the church. (Emphasis added.)

Yet, Times of Israel reports: “Israeli authorities said up to 5,000 Christian Palestinians from the West Bank would be permitted to enter for Easter celebrations.” By failing to note that thousands of Christians have reportedly received permits to enter, even during Covid-19, and by concealing that Christians gathered in numbers in Bethlehem churches and on the streets to celebrate their holy days, The New York Times continues to provide nourishment to its favored narrative about a despondent Palestinian population deprived under the Israeli occupation.