At the time [1986], he had not been back to the place of his birth, what was then Mandatory Palestine, since fleeing in December 1947 at the age of 12. 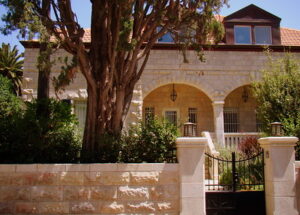 While Said was born in Jerusalem in 1935, his family left for Cairo at a very young age, and that is where he spent his childhood — not in Mandatory Palestine. He did not “flee” Palestine, a falsehood about his life story that he told “as an allegory of the Palestinian people,” as the late scholar Justus Weiner, who uncovered the truth about Said’s biography, said.
As the March 25, 2021 Times correction, about a separate Times review of Timothy Brennan’s book about Said (“Places of Mind: A Life of Edward Said”),  states:

An earlier version of this review misidentified the city that was Edward Said’s childhood home and misstated details about Jerusalem’s division into Jewish and Arab areas. Although Said was born in Jerusalem, his family’s home was Cairo; they did not move from Jerusalem. Jerusalem was not partitioned into Jewish and Arab halves in 1947. In 1949, control of the city was divided as part of an armistice.

When the digital article was amended March 25, the false claim that “Said’s family moved to Cairo in 1947 after the United Nations divided Jerusalem into Jewish and Arab halves” was replaced with accurate information: “Said grew up in Cairo.”
Previously, on Oct. 1, 2003,The Times published the following correction regarding Said’s obituary:

An obituary on Friday about Edward W. Said, the Columbia University literary scholar and advocate of a Palestinian state, misidentified the city that was his childhood home and misstated the date of Jerusalem’s partition into Jewish and Arab areas. Although Mr. Said was born in Jerusalem, in 1935, his family’s home was Cairo; they did not move from Jerusalem. Jerusalem was partitioned in 1949, not 1947.

According to British Mandate records, Said’s parents neither owned nor rented the Jerusalem dwelling that he at times falsely portrayed as his childhood home.
“The fact is that the ‘best-known Palestinian intellectual in the world’ (as he was recently described on the BBC) made wholesale political use of the supposed circumstances of his childhood, weaving an elaborate myth of paradise and expulsion from paradise out of one or two circumstances and a raft of inventions. Edward Said was never a refugee from Palestine, but he is certainly a refugee from the truth,” wrote Weiner in 2000. More than two decades later, the falsehood’s appearance in two 2021 New York Times reviews of Said’s new “intellectual biography” underscores just how resilient the elaborate myth is among certain circles of intellectual elite.
CAMERA has contacted The Times to request correction that the falsehood be corrected yet again.
See also “Telegraph Corrects Sentence Suggesting That Edward Said Was a ‘Refugee’“