In at least one edition of the April 12 print publication, The New York Times published a sub-heading wrongly referring to Tel Aviv as the capital of Israel. The sub-headline on the (A10) jump of a front-page article (“Explosion Rocks Nuclear Center, Enraging Iran”) stated: “Intelligence officials in the U.S. and Israel implicate Tel Aviv,” using the common journalistic practice of referring to a nation’s capital city as shorthand for the country’s government. 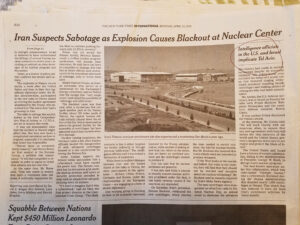 Numerous media outlets have corrected this very point in the past, including The Los Angeles Times, Washington Post, Associated Press, Reuters, Newsweek and The Guardian, among many others. Even Arabic-language reports at Al Hurra and CNN were commendably corrected this summer in an encouraging first, and then BBC Arabic subsequently came through with multiple corrections of the identical issue.

On Nov. 22, 2002, The New York Times published the following correction:

An article yesterday about a man accused of having tried to hijack an El Al plane en route to Istanbul from Tel Aviv on Sunday referred incorrectly to Tel Aviv. It is not the capital of Israel; Jerusalem is.

CAMERA has contacted The New York Times requesting a print clarification making clear that Jerusalem, not Tel Aviv, is the capital of Israel. Stay tuned for an update.