“Just as our news photographs must reflect reality, so too should our captions. They must adhere to the basic Reuters rules of accuracy and freedom from bias and must answer the basic questions of good journalism. Who is in the picture? Where was it taken? When was it taken? What does it show? Why is a subject doing a particular thing?” – Reuters Handbook of Journalism

The Reuters Handbook of Journalism requires captions to cover the basic facts of the pictured scene: who, where, when, and what. Yet, multiple Reuters captions Friday about an attempted Palestinian stabbing attack near Hebron were consistent with a discernable pattern in which the news agency has repeatedly referred to Palestinian attacks vaguely as “incidents.” Like earlier uninformative captions about Palestinian attacks, Friday’s captions failed to give any indication about the nature of the “incident” which took place, and who was involved in the unspecified incident. 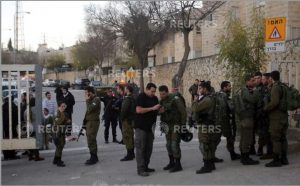 Israeli forces gather at the scene of an incident near the settlement of Kiryat Arba, in Hebron, in the Israeli-occupied West Bank January 11, 2019. REUTERS/Mussa Qawasma 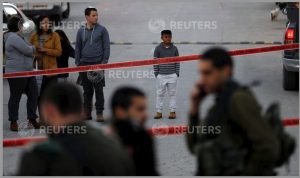 Israeli settlers stand near the scene of an incident near the settlement of Kiryat Arba, in Hebron, in the Israeli-occupied West Bank January 11, 2019. REUTERS/Mussa Qawasma 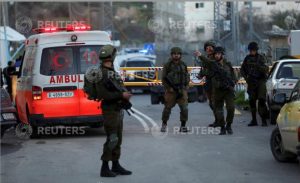 Israeli forces secure the scene of an incident near the settlement of Kiryat Arba, in Hebron, in the Israeli-occupied West Bank January 11, 2019. REUTERS/Mussa Qawasma

Friday’s attempted stabbing was hardly the first time in which Reuters stripped key information about Palestinian attacks from captions – even obscuring the fact that there was an attack – by referring euphemistically to an “incident.”

Thus, on Dec. 13, 2018, Palestinian assailants fatally shot two Israeli soldiers and seriously wounded a civilian and soldier near the West Bank settlement of Givat Asaf. A Reuters photograph of one of the victim’s arrival at the hospital was accompanied by a caption which referred only to an “incident.” 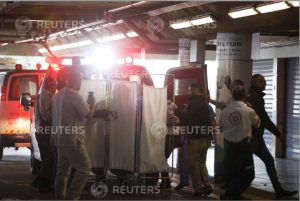 Israeli medics evacuate an injured person following an incident in the Israeli-occupied West Bank, at a hospital in Jerusalem December 13, 2018. REUTERS/Ronen Zvulun

Similarly, on March 18, 2018, when a Palestinian assailant fatally stabbed Israeli Adiel Kolman in Jerusalem, Reuters captions spoke only of an “incident.” 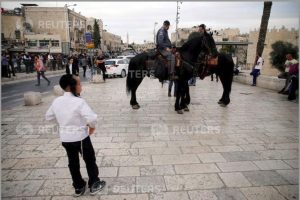 On May 13, 2017, when a Jordanian tourist stabbed an Israeli police officer in the neck and head, and the officer subsequently shot his attacker dead, Reuters captions again obscured the attack by referring only to an “incident.” An Israeli border policeman walks by as a worker cleans the floor following an incident in the Old City of Jerusalem May 13, 2017 REUTERS/Ammar Awad

Reporting that an “incident” occurred is as informative as saying “something happened.” An incident could be anything from a fatal heart attack, a hit and run, a flash mob, a crime or a terror attack – virtually anything at all. Surely by the time that the photos were filed – in the last image, a worker was already cleaning up in the aftermath of the attack – it was at least known that a stabbing attack took place. Yet, that caption, and others, were missing the absolute bare minimum of information.

In response to CAMERA’s request for clarification on the last image, Reuters maintained at the time that the news agency “hadn’t yet received police confirmation/comment,” and noted that “as soon as we had more information, we published a story which puts the photos in the context ‘of a string of street attacks.'”

Captions must not contain assumptions by the photographer about what might have happened, even when a situation seems likely. Explain only what you have witnessed. All other information about an event must be sourced unless you are certain of your information.

Israeli soldiers stand at the entrance of the Givat Havot settlement, between the occupied West Bank city of Hebron and the Kiryat Arba settlement on its outskirts, on January 11, 2019, after an attempted stabbing attack by a Palestinian.

Likewise, AFP captions had the following details about the Dec. 13 attack, which Reuters had described only as an “incident”:

An Isreali [sic] soldier is consoled as Israeli forces and forensic experts inspect the site of a Palestinian drive-by shooting attack outside the West Bank settlement of Givat Asaf, northeast of Ramallah, on December 13, 2018. Two Israelis were killed and at least two others were wounded at the bus stop in the occupied West Bank, the army said. “A Palestinian opened fire at a bus stop killing 2 Israelis, severely injuring 1 & injuring others at Asaf Junction, north of Jerusalem,” the Israeli military said on its Twitter account.

About the deadly March 18, 2018 “incident” in which Kolman was mortally wounded, the Associated Press was able to ascertain:

Israel police secures the scene of an stabbing attack in Jerusalem’s Old City, Sunday, March 18, 2018. Israel’s Shin Bet security service says a Palestinian has stabbed an Israeli in Jerusalem, seriously wounding him. Police said he was shot dead by officers at the scene. (AP Photo/Mahmoud Illean)

Thus, either Reuters repeatedly has been slow to get information compared to other leading wire services when it comes to Palestinian attacks against Israel, or it has deliberately whitewashed these attacks as unspecified “incidents.” Neither option reflects well on the news agency.