A slightly different version of this article appeared in The Algemeiner on February 4, 2022.

In December 2021, a Palestinian news outlet reported on a poll it conducted which found that 93% of the Arab residents of Jerusalem prefer to remain under Israeli rule, with an Israeli identity card. Of the 1,200 Arab Jerusalemites polled, only 84 said they would prefer Palestinian Authority rule.

While outlets like The Algemeiner reported on this, most of the world has remained entirely ignorant of this reality. Instead, the international news is flooded with the obscene allegation that Israel is an “apartheid” state. Ostensibly mainstream “human rights” organizations like Amnesty International and Human Rights Watch are purveying modern antisemitic libels, essentially repackaging the “Zionism is racism” canard, uniquely denying the Jewish people the right to self-determination while simultaneously accusing the vast majority of Jewish people of being racist ideologues.

Media bias against Israel is nothing new. At CAMERA, we have been correcting the record in media outlets for decades.

What groups like Amnesty are doing, however, is exploiting the way in which the biased media works in shaping public conversations. As CAMERA’s Associate Director and Research Director Alex Safian explained in responding to Amnesty’s February 1st report:

Anyone who actually managed to read through Amnesty’s 280-page report accusing Israel of the crime of apartheid will tell you that it is not particularly well-written or convincing. It’s a confusing, disorganized mess that would make any self-respecting lawyer want to abandon the practice of law, lest they be a part of a professional industry that has been so degraded by such amateurish rubbish.

But Amnesty knows almost no one will actually read the report.

As law professor Avi Bell explained regarding Human Rights Watch’s report in 2021 (but which equally applies to Amnesty’s report this week), “the length of the report is an important part of HRW’s strategy of marketing its propaganda as ‘research.’”

Amnesty is counting on lazy journalists and politicians to pick up the report and wave it around, picking out a random quote a staffer found that suggests Israel is a racist endeavor. They also know too few journalists these days are willing and able to perform serious journalism and ask the tough questions (with very notable exceptions such as Lazar Berman’s outstanding interview of two top Amnesty officials). 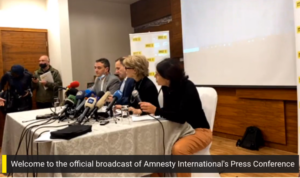 Amnesty officials in an Israeli hotel holding a press conference on their new report accusing Israel of being an “apartheid” state.

As a consequence of Amnesty’s deliberate exploitation of media bias and unprofessionalism, too many are hearing the false, slanderous narratives of “Israeli apartheid” instead of the actual reality on the ground, in which the Arabs of Jerusalem prefer Israeli rule to Palestinian rule.

Those who would support the truth, and those who recognize the creeping danger of the mainstreaming of antisemitism being fueled by this dynamic, must be prepared to push back. There have already been many outstanding responses to Amnesty’s libels, such as those from CAMERA’s Alex Safian, Ricki Hollander, Sean Durns, and Aron White for CAMERA-UK, as well as many other lawyers and researchers. There is also good journalism out there, such as The Algemeiner’s coverage of the poll of Arab Jerusalemites. It’s time to start picking up these articles and responses and start waving them back.