Amnesty International’s latest report charging Israel with being an apartheid regime continues to be exposed for what it is—part of a widespread, disingenuous propaganda campaign to delegitimize the Jewish State. Although the report’s authors remain unnamed by the organization, these are the people who publicly promote the campaign and stand behind it.  Long before their current campaign of vilification, they established their bona fides as defamers of the Jewish state willing to fabricate facts to accomplish their goal. 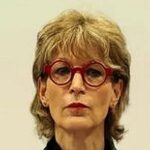 Callamard was appointed Secretary General of Amnesty International in March 2021.

Her obsession with demonizing the Jewish state extends to lying about former Israeli Prime Minister Shimon Peres and an Israeli role in Yasir Arafat’s death. She falsely claimed that Peres admitted that PLO leader Yasir Arafat was assassinated [by Israel], although he said nothing of the sort. Even when her falsehood was publicly exposed, Callamard refused to retract it from her twitter account, where it still remains. This did not stop her from being appointed Special Rapporteur on extrajudicial, summary or arbitrary executions for the notoriously biased UN Human Rights Council where she served from 2016-2021 – just before assuming her latest job at Amnesty International. 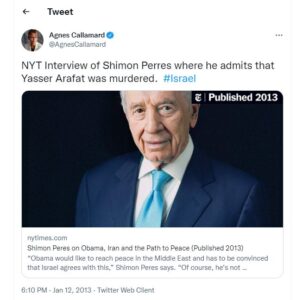 When, in 2018,  Hamas leaders encouraged its people to violently tear down the border between Israel and Gaza and “implement the right of return” as a “new phase in the Palestinians’ national struggle on the road to liberating all of Palestine, from the river to the sea,” Callamard in her capacity as UNHRC Special Rapporteur defended the violent attempts to eliminate the Jewish state as “a legitimate exercise of the rights of freedom of expression.” Instead, she condemned Israel’s measures to protect its soldiers and border. Despite video and photographs showing  rioters who were throwing rocks, planting explosives at the fence, shooting at Israeli troops on the other side, and calling for killing Jews, Callamard and her cohorts insisted the violent rioting was “peaceful,” while discounting the evidence:

“There is no available evidence to suggest that the lives of heavily armed security forces were threatened. Israel has ignored repeated demands by the international community to credibly investigate and prosecute substantial allegations of wrongful killings by its security forces.”

She publicly opposes Israel as the nation state of Jews, stating:

“How can you support a law that makes a distinction between citizenship and nationality on the basis of your race? It’s mind-boggling to me.” 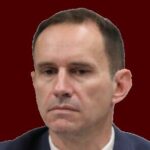 Luther’s position at Amnesty International is Research and Advocacy Director and Senior Adviser.

Amnesty International claims — counter to the opinion of most legal authorities — that Palestinians have a legal right to return to Israel.  Luther promotes this so-called “right of return”— which is widely recognized as a means of eliminating the Jewish state—to solve the Arab-Israeli conflict. He declares:

When asked about the disproportionate scrutiny and condemnation of Israel, compared to that of  any other country, Luther reverts to the old, anti-Semitic trope of Jewish power and control, insisting that Israel

“managed to shut down scrutiny using the power of its relationships…. you can look at UN inaction. Because [Israel] has influence over powerful allies who then manage to stop it, stop the scrutiny.” 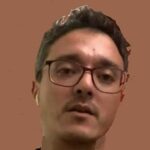 Raised in Ramallah, Hijazi is a longtime anti-Israel activist who seeks the elimination of a Jewish state. He previously worked as a PR officer for the Palestinian Authority’s Office of the Ministry of Planning in Ramallah, and with the International Solidarity Movement that encouraged Palestinian “legitimate armed struggle” against Israel. He has lauded and featured photos of notorious Palestinian terrorists on his Facebook page.

He is a longtime activist against a two-state solution who calls for ending the Jewish state under the guise of human rights:

“The main problem today is that we cannot reconcile the human rights discourse that the Palestinian movement adopted and the colonial project of the nation-state that is still playing out in our region. Instead of wasting time deliberating which state and how to get it we need to be assertive that any “state” solution within the boundaries of Mandate Palestine is only a step towards complete colonization. The solution to the conflict must be regional and cross border, with important international implications and go beyond the limitation of national liberation according to colonial drawn lines…”

He publicly campaigns for the BDS movement and has called for “a general boycott of Israeli products”:

“When anyone purchases Israeli products, they are funding the occupation of our land….Israel has a stranglehold over our economy … we must continue to resist and take action….Resist! Boycott! We Are Intifada!” 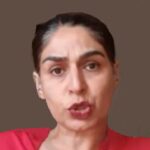 Noy provides the Israeli face of the campaign, providing cover to the Palestinians and non-Jews involved. Born in Iran, Noy emigrated to Israel with her family during the 1979 Islamic revolution.  But she denies anti-Semitism is, or ever was, a factor among Islamic leaders of Iran. While the Jewish state provided refuge to her family, Noy strongly opposes the notion of a Jewish state:

Noy is a longtime anti-Israel activist in the mold of the anti-Zionist, marginal Israeli Black Panther group of the 1970’s. She is an executive board member of B’tselem, the Israeli group that started the current vilification campaign that accuses Israel of being an apartheid state.  B’tselem pushed the bar further than previous campaigns, going so far as to use Nazi tropes about Jewish supremacy to demonize Israel.

Noy calls for international intervention against Israel and is signatory to a petition by a fringe group of Israeli Jews who band together with non-Jews to reject Jewish self-determination in the Jewish historic homeland. Reusing the Nazi tropes about supremacy, the petition states:

“As individuals who belong to the side of the oppressor, and that have tried for years to shift public opinion in Israel in order to change the foundations of the current regime, we have long come to the conclusion that it is impossible to change the Jewish supremacist regime without external intervention…”