A slightly different version of this article appeared in Jewish News Syndicate on February 24, 2022.

Since its inception, Israel has been subject to a constant barrage of delegitimization campaigns. From Arab dictators to antisemites masquerading as “human rights activists,” the right of the Jewish state to exist has been constantly called into question.

A favorite tool of the delegitimizers has been the co-opted and corrupted United Nations, used as an ostensible authoritative source to constantly put to question Israel’s right to exist. Consider, for example, Palestinian leader Mahmoud Abbas’ infamous New York Times opinion piece, in which he argued for “Palestine’s” admission to the U.N. as a way to “pave the way for the internationalization of the conflict as a legal matter, not only a political one.” (Don’t worry, though – the Palestinian Authority still believes in and incentivizes violence.)

The new U.N. Commission of Inquiry (COI) is the latest and arguably most dangerous iteration of this strategy, which is why Israel has decided to refuse to cooperate with it. With an expansive and unparalleled mandate – obviously intended to engage in historical revisionism, label Israel a unique evil and absurdly accuse it of all manner of atrocities – the COI is, in the words of Israeli Ambassador to the U.N. Meirav Eilon Shahar, “an effort to delegitimize and even criminalize [Israel’s] very existence.”

The purpose of delegitimization is perfectly clear. Even as Arab regimes and the Soviets manipulated and corrupted the U.N. into efforts such as declaring that Zionism was a form of racism, they were also waging military campaigns to wipe Israel off the map.

One can see the same strategy at play in another horrifying spectacle. On Monday, Russian dictator Vladimir Putin gave an hour-long sermon with singular theme: delegitimizing the right of Ukraine to exist through wild accusations of atrocities and historical revisionism.

In Putin’s fantasyland, “modern Ukraine was entirely created by Russia or, to be more precise, by Bolshevik, Communist Russia.” The ultimate goal of this revisionism was then laid ominously clear: “You want decommunization? Very well, this suits us just fine.”

Putin might as well have picked up the delegitimization playbook from the U.N. itself.

Yet there are some who think that countries like Israel and Ukraine should play into these games premised on the fundamentally discriminatory and dangerous grounds of questioning their legitimacy. Human Rights Watch Executive Director Ken Roth – ignoring seven decades worth of enough evidence to fill multiple Amazon warehouses in order to use scare quotes – tweeted, “The Israeli government says it won’t cooperate with a UN investigation, citing, of course, ‘bias.’ The real reason seems to be fear that the UN will condemn its crime against humanity of apartheid.”

Legitimate debate, and legitimate criticism, is one thing. But that is not what the COI or Putin are about. 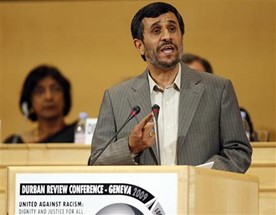 Navi Pillay, the chairperson of the latest U.N. Commission of Inquiry, respectfully listening behind then Iranian leader Mahmoud Ahmadinejad as he mocked the Holocaust and demonized Israel during the Durban II Conference.

Instead of basing the discussion on standard, equal grounds, the COI seeks to put Israel on a separate plane in which the fundamental question is blatantly skewed against it. It’s a plane premised on the idea that Israel’s right to exist and right to defend itself is fundamentally at question and fundamentally different than that of any other state.

It’s the same kind of dynamic as a Jew in 15th-century Spain trying to argue his or her case before the Inquisition tribunal.

Or, put another way, Roth’s moral lecturing is like a Chomskyite chastising Ukraine for refusing to consider the merits of Putin’s decrees forcibly cleaving apart the sovereign state of Ukraine.

In 1975, immediately following the U.N.’s adoption of the “Zionism is racism” resolution, U.S. Ambassador Daniel Patrick Moynihan began his famous speech with the following words: “There appears to have developed in the United Nations the practice for a number of countries to combine for the purpose of doing something outrageous, and thereafter, the outrageous thing having been done, to profess themselves outraged by those who have the temerity to point it out, and subsequently to declare themselves innocent of any wrong-doing in consequence of its having been brought about wholly in reaction to the ‘insufferable’ acts of those who pointed the wrong-doing out in the first place.”

It’s the same exact game being played today by those like Ken Roth and those at the U.N.

Israel is right to snub the U.N. COI, and the U.S. – as well as all fair-minded democracies – need to step up and put an end to this blatant antisemitism coming from the U.N. It’s deeply concerning that they would allow their U.N. funding to be used for an inherently antisemitic initiative.

Democracies need to embrace their “Moynihan moment,” and embody the words of Ambassador Moynihan in 1975: “The United States rises to declare before the General Assembly and before the world, that it does not acknowledge, it will not abide by, it will never acquiesce in this infamous act.”

What begins with Jews never ends with Jews, and in a world where the right of the Jewish state to exist is openly questioned, who’s to stop dictators of the likes of Putin from posing the same question about other states?

David M. Litman is a media and education research analyst at the Committee for Accuracy in Middle East Reporting and Analysis (CAMERA). The opinions presented here are his alone.