A slightly different version of this article appeared in The Algemeiner on August 2, 2022.

In a moral institution, particularly one built in the aftermath of the Holocaust, Miloon Kothari would be long gone by now.

During an interview with a notoriously antisemitic website, Mondoweiss, Kothari — one of three members of a United Nations “Commission of Inquiry” (“COI”) against the Jewish state — told the interviewer, “[W]e are very disheartened by the social media that is controlled largely by, whether it’s the Jewish Lobby or it’s the specific NGOs. A lot of money is being thrown in to trying to discredit us.”

For good measure, Kothari also made a point of questioning whether the Jewish state belonged among the community of nations at the UN.

But, of course, if the UN was a moral institution, Kothari wouldn’t be the only one gone by now. His fellow commissioner, Chris Sidoti, took to the UN floor in Geneva in March to accuse Jewish advocacy groups, outraged by the open bias of the COI and its members, of being “GONGOs” — that is, creations and instruments of the State of Israel.

Despite his open spewing of the hateful dual loyalty trope against Jews, not a single country at the UN, nor any UN official, found such remarks detestable enough to say anything at the time. 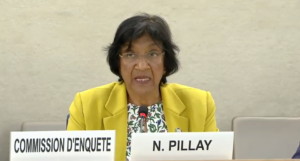 Finally, if the UN was a moral institution, the third commissioner, Navi Pillay, would never have been appointed in the first place, having sneeringly dismissed Jewish advocacy groups concerned about the vicious antisemitism at a UN “anti-racism” conference as “certain lobby groups focused on single issues.”

She then “highlight[ed] [the COI’s] position in the clearest terms on anti-Semitism” by repeating another line from Sidoti in March:

The COI’s position on antisemitism isn’t that it’s condemnable, but rather that Jews – the victims of antisemitism – “trivialize” and “legitimize” it. In other words, the Jews are asking for it.

Leaving any of these three commissioners in charge of an investigation against Israel is like putting David Duke in charge of the trial of Alfred Dreyfus.

If the UN was a serious, moral institution, not only would Kothari, Sidoti, and Pillay all be long gone from the COI — but yet another inquisition against Israel, with yet another deeply skewed and unserious mandate and staffed by known haters of the Jewish state, would never have been created in the first place.

The level of disproportionate focus on the Jewish state is outrageous, and is an extreme insult and disservice to people suffering in actual oppressive states (many of which are proud UN members).

Russia is openly justifying executing prisoners of war. China is throwing entire ethnic and religious minorities into concentration camps. The Taliban once again have taken away the basic rights of every woman. The Syrian government is executing civilians. Yet here we are, with UN officials questioning only the Jewish state’s legitimacy, questioning whether only the Jew among nations belongs at the table with the rest of the “good” nations.

So where are the leaders?

Three years ago, UN Secretary-General Antonio Guterres assured us: “I guarantee you that I will continue to call out anti-Semitism, racism, and other forms of hatred — loudly and unapologetically.” Here is an opportunity to show moral leadership and call out antisemitism in his own institution. Why the crickets?

That same year, UN High Commissioner for Human Rights Michelle Bachelet gave another nice-sounding speech, explaining: “We must push back against this slowly rising tide of anti-Semitism.” Where is her pushback?

What about the members of the UN Human Rights Council, which created the COI? Out of the 47 members, only a handful have spoken up, including the United States, the United Kingdom, France, Germany, the Netherlands, and the Czech Republic.

What about the other 41 member states of the Human Rights Council? What does it say about an institution when nearly 90% of its members remain silent in the face of the open Jew-hatred by individuals they themselves voted to give a megaphone to? Is the UN where the moral conscience of the world goes to die?

What about the President of the Human Rights Council, whose predecessor appointed Sidoti, Kothari, and Pillay in the first place? To his credit, the president acknowledged in a letter to Pillay, using rather forgiving terms, that Kothari’s remarks “could reasonably be interpreted as stigmatization of the Jewish people.”

But the letter also created an easy escape hatch to avoid accountability, and “respectfully suggest[ed]” that Kothari “consider the possibility of publicly clarifying his unfortunate comments.” [emphasis added]

As anyone familiar with the UN would expect, Kothari took that easy escape hatch, and it appears unlikely anything will change at the COI in the near future.

There is something deeply objectionable about leaving three individuals known for making antisemitic statements empowered to use the imprimatur of the UN to uniquely delegitimize Jewish self-determination.

It’s hard to act surprised. After all, the UN — the brainchild of those who fought against the greatest evil the world had ever seen — has now become one of the world’s greatest normalizers of antisemitism.