This week the New York Times reported that CNN is experiencing a marked decline in both ratings and profitability. According to Nielsen, the Times reported, CNN’s prime time ratings are down 27 percent compared to a year ago, and sources suggest that the network may be on track to miss its profitability target by more than $100 million.

Yet, the network continues to degrade the public trust in its reporting, specifically with regard to the death of Al Jazeera journalist Shireen Abu Akleh. (“‘They were shooting directly at the journalists’: New evidence suggests Shireen Abu Akleh was killed in targeted attack by Israeli forces,” May 26, 2022.) CNN’s May investigation continues to have relevance as Congresswoman Alexandria Ocasio-Cortez referenced it in a press conference just last Thursday. 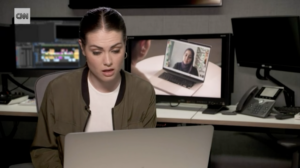 CAMERA has previously written that CNN, along with other news outlets, ignored contemporaneous eyewitness statements made on the same day that Abu Akleh was killed. Both Shatha Hanaysha and Ali Samoudi, who were with Abu Akleh when she was shot, told Arabic language news outlets that there were gunmen on the roofs of nearby buildings. Yet, as I wrote previously, none of the ten journalists who contributed to the CNN report seem to have asked Ms. Hanaysha to explain the discrepancy between what she told Al Jazeera, and what Samoudi told the Arabic Post, on the day of the shooting, and what Hanaysha later told CNN.

In addition, thanks to a tip from blogger Elder of Ziyon, CAMERA has learned additional information that contradicts CNN’s reporting.

CNN wrote on May 26th: “But an investigation by CNN offers new evidence — including two videos of the scene of the shooting — that there was no active combat, nor any Palestinian militants, near Abu Akleh in the moments leading up to her death.” (Emphasis added.)

Yet, an 8-minute video on Middle East Eye’s YouTube page here shows that there were, in fact, other gunmen in the area. It appears that CNN also had access to that video, as a snippet from it is included in the video report included with the online written report.

It’s unclear whether or not this is a part of the same video CNN referenced when it wrote, “In one 16-minute cellphone video shared with CNN, the man filming walks toward the spot where the journalists had gathered, zooming in on the Israeli armored vehicles parked in the distance, and says: ‘Look at the snipers.’ Then, when a teenager peers tentatively up the street, he shouts: ‘Don’t kid around … you think it’s a joke? We don’t want to die. We want to live.’” (Emphasis added.)

The Middle East Eye video, however, indicates clearly that there were other gunmen in addition to those in the IDF convoy. CAMERA Arabic has independently translated excerpts of it as follows:

“Here, here, here is the military, here it is. Here it is together with the snipers’ weapons, there are some further on”

Minute 4:04: Camera is again pointing towards the street with the yellow vehicle

“Here, here is the military”

Neither CNN nor any other prominent reporting has noted any IDF positions at the time Abu Akleh was shot other than the convoy and those soldiers standing right next to the convoy. At the very least, journalists should be asking who these gunmen on hilltops and rooftops were.

CAMERA has contacted CNN and asked how the network squares this video with its assertion that the only Palestinian gunmen were on “the other side of the IDF forces” (as Katie Polglase said in her voice-over in the video report). CAMERA has also asked the network about shots that can be heard on the video both before the above dialogue at about 2:40 and also at about the 5-minute mark on the video, about two and a half minutes before the shots that killed Abu Akleh (shortly after 7:00). So far CAMERA has received no response, and CNN has still failed to make any changes or corrections to its reporting.