This press backgrounder has been provided by CAMERA to media outlets. A more detailed analysis of the Commission’s report is forthcoming.

Today (June 7), the United Nations “Independent International Commission of Inquiry on the Occupied Palestinian Territory, including East Jerusalem, and in Israel” (“COI”) published its first report to the Human Rights Council.

Provided below are four important facts about the COI for journalists and their audiences to understand in evaluating the credibility and content of the report, including some brief commentary on the contents of the report itself.

Navi Pillay, the chairwoman, had previously signed petitions to “sanction apartheid Israel” and endorsed the antisemitic Boycott, Divestment, and Sanctions movement. Despite a letter from the watchdog organization, UN Watch, detailing her lack of impartiality and objectivity and calling for her resignation, Pillay has remained in her position. It is worth recalling that Pillay was the UN official who hired Grietje Baars, a known anti-Israel activist who had publicly supported BDS and compared Israelis to Nazis, as the lead researcher and writer for the infamous UN Goldstone Commission that “investigated” Israel’s Operation Cast Lead in 2008-2009.

In 2002, Miloon Kothari broke UN rules and lied to both Israeli and UN officials while preparing an anti-Israel report in a previous position he held at the UN. Kothari has also called for ending “military cooperation with Israel” and has falsely claimed that a “basic theocratic character of the Israeli legal system establishes ethnic criteria as the grounds for the enjoyment of full rights.”

Chris Sidoti, the third commissioner, serves on the advisory council of an organization that openly called for an arms embargo against Israel and accused Israel of “apartheid.”

As with past UN inquiries, the mandate adopted by the Human Rights Council – known for its obsessive bias against Israel – predetermines conclusions and slants the inquiry against Israel. For example, the COI was instructed to investigate:

“all underlying root causes of recurrent tensions…instability and protraction of conflict, including systematic discrimination and repression based on national, ethnic, racial or religious identity;” (emphasis added)

This language concludes, before any actual investigation, that a “root cause” is “systematic discrimination.” As the only specific “root cause” identified, the mandate clearly skews the COI towards a predetermined conclusion and narrative.

Moreover, by only identifying a vague allegation of “systematic discrimination” as a cause for the Israel-Hamas conflict in May 2021, the UN is deplorably shifting responsibility away from those who began the war by launching rockets at civilians. This excuses and legitimizes terrorist violence against civilians.

Indeed, in the report itself, the Commission states as a matter of fact that its mandate required it “to take full account of intersecting forms of discrimination…as both a driver and a root cause of conflict.” This comes even though, while making definitive allegations against Israel, the COI’s report admits it has not conducted its own investigation and legal analysis yet (para. 78).

3) The Inquiry’s Low Standard of Proof

The COI has indicated that the standard of proof it will apply is that of “reasonable grounds” – the same standard used in various countries to make an arrest, but well short of the standard to convict. This will mean that the COI is set to identify “violations” and make recommendations for “accountability” without “any of the protections of an open trial, confrontation of witnesses, criminal-level standards and burdens of proof, rules of admissibility or advice of counsel.”

Worse, the COI itself has declared that a “reliable primary source” need only be corroborated by “one additional independent and reliable source, which may include the investigator’s own findings.” In this regard, it is worth recalling that the infamous and disgraced UN “Goldstone Commission” found that every single witness it used was “fully credible and reliable.” 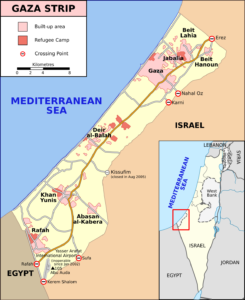 A map of the Gaza Strip, including its border with Egypt.

The report itself demonstrates the flimsiness of evidentiary standards applied. It “notes the strength of prima facie credible evidence available that convincingly indicates that Israel has no intention of ending occupation…” The COI neither identifies this evidence, nor addresses the obvious contradictory evidence, such as Israeli offers of statehood to the Palestinians throughout the 1990s and 2000s. It even accuses Israel of still “occupying” Gaza, falsely stating that “Israel remains in occupation of the territory by virtue of the control exercised over…land crossings at the border,” notwithstanding that Israel has no control over Gaza’s land border with Egypt.

Despite purportedly being an investigative mechanism that is to focus on all sides of the conflict, the COI’s report clearly demonstrates an obsessive focus on one side, Israel. Even though, as stated, the COI admits it has not actually investigated any allegations, the commissioners openly acknowledge their recommendations and findings on “the underlying root causes were overwhelmingly directed towards Israel.”

For example, the Commission laments that the “State of Palestine” hasn’t been able to “assert its state functions” because it “has been under occupation by Israel since 1967.” This completely ignores the fact that the “State of Palestine” has never existed as a state. Moreover, it ignores the fact that the referenced territory was occupied by Jordan before 1967.

Similarly, while attacking Israel for having “not brought an end to the occupation” pursuant to UN resolution 242, the commissioners never mention that the “withdrawal of Israel armed forces from territories occupied in the recent conflict” is explicitly conditional on “termination of all claims or states of belligerency and respect for and acknowledgement of the sovereignty, territorial integrity and political independence of every State in the area and their right to live in peace within secure and recognized boundaries free from threats or acts of force.”

By repeatedly ignoring the responsibility of actors other than Israel, the COI demonstrates its disinterest in actually contributing to a peaceful solution, and a disinterest in genuine analysis.