CAMERA’s Israel office has secured multiple corrections to a Time article about the Gaza Strip that was riddled by factual errors and egregious omissions and that whitewashed of Hamas (“The Gaza Strip Is Only 25 Miles Long. Here’s How It Became the Center of Decades of Conflict,” May 14).

Most significantly, Ciara Nugent’s ostensible history of Gaza had completely ignored the fact that Israel withdrew every last civilian and soldier from the Gaza Strip in 2005. Discussing violence in 1987, the Time editorial intern had noted that “Israel refused to dismantle its remaining settlements.” She then skipped forward to 2006 and Hamas’ election victory, completely ignoring Israel’s monumental 2005 withdrawal from the territory and leaving readers with the wrong impression that to this day Israeli settlements remain in the territory. 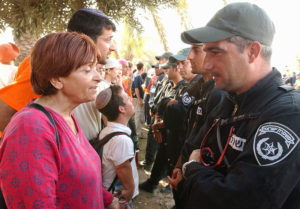 Editors also corrected blatant factual errors about the 1956 Suez crisis which CAMERA pointed out. Specifically, Nugent had erred on two points, stating: “Gaza remained under Egyptian military rule until the Suez Canal Crises of 1956, when Egypt nationalized that major shipping route in defiance of Britain and France, preventing Israeli ships from passing through the canal. In response, Israel invaded Gaza, occupying the strip for a year before international pressure forced them to give it back to Egypt.”

First, Egypt prevented Israeli ships from entering the Suez Canal since its founding in 1948, not only since 1956, as reported. In 1956, Egypt closed the Straits of Tiran, prohibiting Israeli ships from entering the Gulf of Aqaba and reaching the Israeli Red Sea port of Eilat, a move which Israel regarded as an act of war. (Egypt’s closure of the Suez Canal in 1956 thus affected France and Britain, but not Israel.)

Second, Nugent, who has previously contributed to The New York Times, The Sunday Times, and The Independent, also erroneously reported that Israel remained for a year in Gaza before returning it to Egypt. In fact, the Israeli military campaign began on Oct. 29, 1956 and Israel pulled out its troops from the Gaza Strip in March 1957 – within five months of the start of the operation.

After receiving details from CAMERA on both these points, editors commendably amended the article, which now more accurately states: “Israeli ships were prevented from passing through the canal, and also from using the Tiran Straits linking Israel to the Red Sea. In response, Israel invaded Gaza, occupying the strip for several months before international pressure forced them to give it back to Egypt.” (Again, Egypt’s prohibition on Israeli ships in the Suez Canal was a reality since 1948.)

Other shortcomings in the article remain. For instance, Nugent significantly downplays the frequency and severity of Hamas rocket attacks, stating: “Sporadic rocket fire and attacks from Hamas and other militant groups in Gaza have been met with several bombing campaigns and land assaults from Israel.” (Emphasis added.) In contrast, Time’s 2009 Gaza time line noted that Hamas had been “regularly raining rockets into southern Israeli towns from Gaza.” (Emphasis added.) The United Nations reported last year (“Gaza: Ten Years Later,” pages 8-9, July 2017), that 2007 to 2010 (phase 1) “saw some 6,500 rockets fired from Gaza to Israel,” 2010 to 2014 “saw more than 11,800 rockets and mortars fired towards Israel” (phase 2), and from 2015 until present, saw “some 200 rockets have been fired from Gaza into Israel” (phase 3). How does “sporadic rocket fire” fairly convey the nature and intensity of nearly 20,000 rockets in the span of one decade?

Nugent further downplays the threat posed by Hamas – (a “guerilla group,” in her words) – by failing to note that the United States, European Union, and Israel have all designated it a terror group and by ignoring the fact that Hamas’ charter calls for the elimination of the Jewish state.

Time’s editorial intern also papered over the Arab aggression leading to the Six Day War, stating: “In June 1967, years of escalating border skirmishes and small-scale guerrilla attacks, exacerbated by the tensions of the Cold War, came to a head in the Six-Day War.” The euphemistic reference to “border skirmishes and small-scale guerilla attacks” conceals who was attacking whom. Between 1951 and 1956 alone, Palestinian fedayeen crossing over from Jordan and Egypt killed 967 Israelis within the Jewish state’s 1949 boundaries, prompting numerous Israeli counter-terror operations.

About the broader causes of the Six Day War, Nugent’s elliptical account states only: “On the morning of June 5, 1967, anticipating a move from its Arab neighbors, which had just signed a defense pact, Israel launched a stunning preemptive strike . . . .” Not mentioned are Egypt’s closing of the Straits of Tiran to Israeli shipping, its ejection of U.N. forces, the amassing of Arab armies on Israel’s borders, the declarations by Arab leaders’ about Israel’s impending demise, and the ongoing Syrian fire against Israeli communities in the north.

Nugent also greatly misleads about the 1947 United Nations Partition Plan stating that it gave the Palestinian Arabs “less than half the land despite their outnumbering Jewish residents two to one.” She ignored the significant fact that the land destined for the Jewish state also contained a huge Arab minority, with a Jewish population of just over 500,000 and an Arab population of 350,000.