Last weekend, Haaretz English edition published a new investigative report by Uri Blau. Surprisingly, the report appeared only English. As of this writing, there’s no mention of it in the Hebrew edition of the newspaper or its website. Under the headline “Spying on Linda Sarsour: Israeli Firm Compiled BDS Dossier for Adelson-funded U.S. Group Battling Her Campus Appearances,” the report describes how “a secretive Israeli firm collected intelligence on American citizen Linda Sarsour” for the benefit of a pro-Israel group funded by Sheldon Adelson that fights the BDS movement. 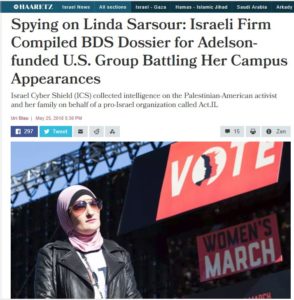 The main points of the report are as follows. The Israeli firm “Israel Cyber Shield” (ICS) spied, collected intelligence and created a dossier on Linda Sarsour, the prominent anti-Israel activist and a supporter of BDS. According to Blau’s report, ICS delivered the file to the pro-Israeli group Act.IL, which used the dossier as the basis of a letter to the heads of American academic institutions, part of a campaign to persuade administrators from allowing Sarsour to speak on campus.

According to Blau, the dossier has more than 10 pages, each of which is marked as confidential. Apart from information that was gathered from Sarsour’s social media accounts, it includes details of a court case in which she was involved. The allegations in the dossier against Sarsour vary, and include applauding violence against Israeli soldiers, leveling false allegations against Israeli security forces, appearing in photographs with Hamas fundraisers, supporting Sharia law and more.

After the story was published, journalists and news consumers raised several objections.  They said, for instance, that the article insinuates that the “spying operation” is connected to the Israeli government, but Blau fails to establish any connection. More importantly, commentators noted that all of the information on Linda Sarsour that is mentioned in the article is readily available online for all to see. What would be the need, then, for a “secretive Israeli firm” to engage in “spying” and “intelligence collection”?

I find two things about this article very telling:
1. It doesn’t actually say how this is connected to the government as it insinuates early on
2. All of the intel mentioned has been available publicly online for over a year (I know bc I wrote about her over a yr ago)

It’s not exactly like this stuff is super-secret or mere “allegations”. It’s all publicly available on the internet. If only I had known I could get paid for collecting it. Here I am, tweeting it away for free. pic.twitter.com/4Cxd7Nr6rk

The case became even more intriguing when the Middle East Forum, an American think tank, chimed in. The think tank charged Blau with “sloppy and false reporting” and claimed the Sarsour dossier as its own work.

Indeed, a glance at Middle East Forum‘s website reveals that the organization has reported extensively for years on Linda Sarsour’s activities. Furthermore, on his personal blog, Daniel Pipes, the founder and president of the Forum, has regularly published about her since 2010. Between these two sites, all of the information that Blau mentioned, including details about Sarsour’s family and her involvement in the court case against the Trump administration, is readily available, along with much more material about the activist.

In addition, while Uri Blau maintained that he holds a dossier marked “confidential” originating with the ICS, the Forum  tweeted the first page of the dossier that it made, and it perfectly matches Blau’s description, down to the “confidential” heading at the top of the page.

Later, The Middle East Forum issued a press release stating that the Forum did write the dossier on Linda Sarsour and noting that since 2010, it has monitored and documented her activities. The press release explained that that dossier was based on that documentation, and that the dossier was indeed the basis of the letter sent to American academic institutions in an effort to persuade them to disinvite Sarsour. Furthermore, the press release said, Middle East Forum made no attempt to hide any of this information. On the contrary, it published everything. Therefore, Blau’s report amounts to “fake news,” and the Forum “calls on Haaretz to issue a public correction and apology.”

Why is it so important who wrote the document that Uri Blau obtained?

First, because this is not the case of an “Israeli organization” that “spies on an American citizen,” but an American organization collecting open source information on a fellow American.

Second, while Blau alleged that Sheldon Adelson, a close associated of Israeli Prime Minister Benjamin Netanyahu, funded the “spying,” the Forum maintained that it never received any funding from Adelson.

Third, the letter against Sarsour is not a part of a campaign against the BDS movement, but a part of a project of an American organization to counter Islamists in America.

Fourth, nothing clandestine was done (as phrases such as “spying” and “collecting intelligence” suggest). All information was gathered from open sources in order to serve a clear agenda.

And so, a story – certainly not the one that Haaretz‘s Uri Blau set out to tell – emerges from a non-story.  Haaretz pedaled a false story about a shadowy Israeli organization spying on an American citizen. But the real story became about the journalist’s false accusations, and his erroneous attribution of the document to the wrong organization.

Presspectiva, CAMERA’s Hebrew department, sent Uri Blau and Haaretz editors the following questions and also asked for response on the points made here:

Why was the report published only in English, an anomaly among Blau’s investigative pieces?

Do you intend to correct the report and/or apologize, per the Middle East Forum’s request?

As of this writing, no response has been received. Nor has Haaretz addressed or made any reference to the Middle East Forum’s statements.

See Presspectiva, where this article originally appeared in Hebrew.

May 31 Update: The same Uri Blau who purported to expose a conspiracy but erred even about the source of the Sarsour dossier is also responsible for an article insinuating a conspiracy between CAMERA and Haaretz’s competitors. You can find CAMERA’s responses to that absurd charge here  and here.