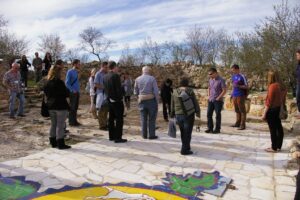 Independent Catholic News (ICN) is a media outlet headquartered in England that “aims to provide speedy and accurate news coverage of all subjects of interest to Catholics and the wider Christian community.”

Recently the publication reprinted, almost verbatim, a press release issued by Churches for Middle East Peace about an attack on the Tent of Nations, a farm located in the West Bank that has been used to indoctrinate Westerners into the anti-Israel narrative promoted by Palestinian Christians from Bethlehem, East Jerusalem and the Gaza Strip. Interestingly enough, when republishing the press statement, ICN omitted a crucial sentence that revealed the attack against Daoud and Daher Nassar, the farm’s proprietors, was likely perpetrated by Arabs living next to the Tent of Nations.

It’s a crucial omission because numerous other articles, including those published by ICN, portray the property as being under constant siege by Israeli Jews living nearby.

Because of ICN’s egregious omission, readers who had been exposed to these previously published articles about the Tent of Nations, which has been a persistent source of anti-Israel propaganda over the years, would likely conclude that the attack was perpetrated by Jews living in the West Bank.

The attack, which took place on January 28, 2022, was particularly brutal. CMEP’s press statement had this to say:

CMEP staff met with Daoud and family members at the hospital after the incident. Daoud suffered head wounds and had surgery including several stitches. Daoud and Daher’s bodies were significantly bruised and with lacerations. Neither had broken bones, and neither had a concussion. They are expected to be discharged from Bethlehem Hospital today.

It is believed –though not yet confirmed– the attack was perpetrated by Palestinian residents of the neighboring village. CMEP affirms the rights of the Nassar Family to their land and condemns all forms of violence including threats and actions from both Palestinians and neighboring settlement communities. CMEP’s executive director says: “We are devastated to hear the news of the attack on Daoud and Daher. The Nassar family embodies holistic peacebuilding in profound ways, even suffering physical threats to their own lives and safety. Over and over again they seek peace with their neighbors despite decades of demolitions, threats, and attacks. CMEP and I personally are doing everything we can to keep the US government informed and to call on the Palestinian Authority to enact the rule of law in response to the perpetrators of this vicious attack.”

Other reports indicate the attackers came from the Arab village of Nahaleen.

In ICN’s version, the sentence declaring that the attack was likely perpetrated by Palestinian residents of a neighboring village has been omitted. Despite this omission, ICN has the nerve to cite CMEP as its source for the information.

Why did ICN omit this fact?

ICN must do a follow-up by citing other stories that confirm the attack was perpetrated by the farm’s Arab neighbors and that numerous organizations have called on the Palestinian Authority to investigate the attack and bring the perpetrators to justice.

If ICN is going to delete crucial information from a press release that is readily available on the internet, what does that say about their coverage of other subjects where the information is harder to verify?