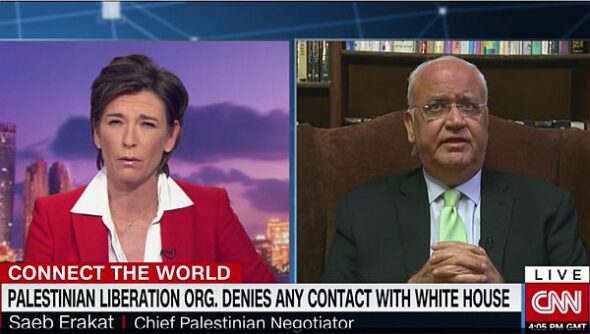 In anticipation of US President Trump’s peace proposal to the Israelis and Palestinians, Chief PLO negotiator Saeb Erekat falsely claimed on CNN International  (Jan. 26, 2020) that the Palestinians were never consulted about it:

Since December 9, 2017, there has been no contacts whatsoever with the White House or the State Department. As you see, President Trump is busy inviting Netanyahu, Gantz, so the three of them can determine my future… This is the most unfair game we’ve ever witnessed in international relations. Somebody who is trying to determine my future, my aspiration, my tomorrow, my grandchildren’s tomorrow without even bothering to consult me… [emphasis added]

In fact, as CNN’s Becky Anderson accurately pointed out in her introduction:

Fortunately, the CNN interviewer did push back on Erekat’s false claims, asking:

Let me put this to you, sir. The U.S. administration say they are trying to reach out. Should there be a back channel? Should you get word that they are trying to speak to the Palestinians? Would it not be better to interact at this point to get a seat at the table?

And when Erekat denounced any peace proposal as “a fraud and a hoax” because the U.S. government recognized the legality of settlements and Jerusalem as Israel’s capital (in other words, any peace proposal that doesn’t embrace Palestinian demands in their entirety must be boycotted), the CNN interviewer pointed out:

With respect, sir, by rejecting outright or out of hand whatever the substance of this political part of this deal is, surely the argument goes that Donald Trump will simply greenlight Israeli annexation of the area in dispute, which quite frankly will do the Palestinians absolutely no good whatsoever.

In fact, it has been reported that the US president made several attempts to contact Palestinian Authority leader Mahmoud Abbas to discuss a peace proposal, but was refused each time.  A high-ranking Palestinian official told the Turkish Anadolu news agency that Abbas rejected several attempted calls by the President in the past few days before he planned to meet with Israeli Prime Minister Benjamin Netanyahu and leader of the rival Blue and White party Benny Gantz.

This would mark the 100th year of consistent Palestinian rejection of proposed peace with the Israelis, starting with the 1920 San Remo Conference’s acceptance of the Mandate to create a national Jewish state in the Jewish ancestral homeland of Israel,  becoming Mandatory Palestine.   CAMERA has long reported on the media’s ignoring or justifying Palestinian rejectionism (see, for example, here, here,  here and here.).  Hopefully, CNN’s willingness to point out to the futility of Palestinian rejectionism marks the beginning of  more truthful and accurate reporting about the quest for peace.