During the evening of September 5, the Israeli Defense Forces (“IDF”) carried out an operation in the West Bank town of Jenin, during which “massive gunfire” was directed at the IDF soldiers. The CNN report on the operation, coauthored by Abeer Salman and Kareem Damanhoury, serves as an illustration of journalistic malpractice by selectively quoting IDF statements in such a way as to hide that fact.

The CNN piece describes the operation this way:

“The IDF said ‘a violent riot was instigated’ during the operation and that ‘the rioters burned tires, hurled rocks, Molotov cocktails and explosive devices at the forces, who responded with riot dispersal means.’ The 16 wounded Palestinians were injured by bullets and shrapnel, according to the Palestinian Ministry of Health, and all were transferred to the hospital in Jenin.”

This description omits another key statement made by the IDF. As reported by Times of Israel:

“The IDF said clashes broke out, including ‘massive gunfire directed at troops,’ amid the demolition operation.

According to Palestinian media reports, a man was killed and several others were injured in an exchange of gunfire with Israeli troops.

The military said troops had returned fire at gunmen and rioters who hurled explosives at them.” (Emphasis added)

Indeed, this IDF tweet (embedded below) about the raid states refers to “massive gunfire directed at the troops.”

Were one to read only the CNN report, one would come away with no clue that the IDF soldiers were engaged in a gun battle, not merely a riot. 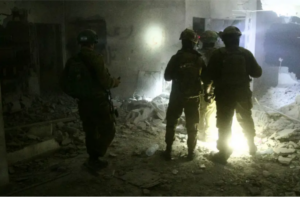 Notably, the IDF was not the only source CNN could have relied on for this information. As reported by the Jerusalem Post, “[v]ideo published by Palestinian media showed Palestinian gunmen exchanged fire with Israeli soldiers.” Some of those videos can be freely found on social media.

CNN’s story egregiously erased this context and selectively quoted the IDF to reinforce its misleading depiction of events that dramatically understates the level of violence Israeli forces encountered during the operation.

The failure to mention the intense gunfire is a particularly acute example of Western media more broadly failing to report on the growing Palestinian violence and instability in parts of the West Bank where the Palestinian Authority (“PA”) is, pursuant to the Oslo Accords, supposed to maintain order and security.

Second, the gunmen, especially those in the Jenin and Nablus regions, are being armed and funded by Palestinian Islamic Jihad and Hamas. The leaders of the two Iranian-backed groups have made no secret of their desire to push Palestinians in the West Bank toward an armed confrontation with Israel. Several Fatah gunmen affiliated with the ruling Fatah faction headed by Mahmoud Abbas have no problem cooperating with Islamic Jihad and Hamas as long as the two groups are willing to offer them money and weapons.

Hamas and Islamic Jihad are hoping that the increase in shooting attacks and armed clashes against settlers and IDF soldiers will also contribute to the undermining of the Palestinian Authority’s control of the West Bank.”

The failure to report on these developments and trends contributes to incomplete understandings of events in the West Bank. By reporting only on IDF operations, largely aimed at arresting suspected terrorists, without explaining the context in which these operations are taking place, audiences are left with only part of the story.