After recently inflating the extent of the maritime border dispute between Lebanon and Israel, both Al Hurra and BBC Arabic have corrected, bringing the disagreement between the two countries around the Israeli Karish gas field back down to its proper proportions. 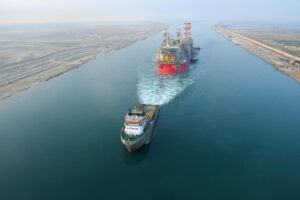 Both of the media outlets had originally erroneously reported that Lebanon claims that all of Israel’s Karish gas field lies within disputed waters. Thus, BBC Arabic had reported: “Israel says that the rig it recently put in the Karish field is located within its exclusive economical zone, while Lebanon says the area is disputed […]” and “the territory disputed with Israel, which includes the Karish field.” (BBC Arabic, July 31st; archived version)

Similarly, Al Hurra had erred: “Israel already works on developing a single drilling site, the Karish field, while Lebanon claims that it is within disputed territorial waters” (Aug. 13; archived version)

In fact, only the northern portion of Karish is in territory claimed by Lebanon as “disputed,” and the rig itself is found entirely in the area both Israel and Lebanon agree is outside Lebanon’s EEZ.

In response to communication from CAMERA Arabic, Alhurra corrected its news item on Aug. 29, and BBC followed suit on Aug. 31. The corrected Al Hurra article now states: “Israel already is working on developing a single drilling site, the Karish field, while Lebanon claims that a part of it is within disputed territorial waters.” (Emphasis added.)