Governments always and everywhere make their own determinations about how to use their funds. They draw up budgets deciding to fund interest A over interest B. That doesn’t mean “there are insufficient funds to meet the needs” of interest B. It just means that the government has not prioritized that cause. 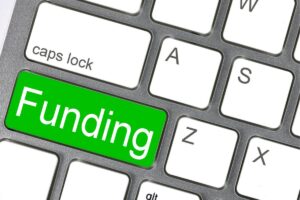 In May the World Bank warned that the Palestinian economy was in a “precarious” state.
The PA faces a fiscal deficit of more than five percent of gross domestic product, before financial aid, according to the World Bank.
There are insufficient funds to meet the needs of the territory’s intellectually disabled.

Given that the Palestinian government, like every government, has choices about how to use its funds, the reporter’s assertion that “There are insufficient funds to meet the needs of the territory’s intellectually disabled” is not a factual statement. It’s editorializing.
Indeed, the Palestinian Authority has proactively decided it prefers to reward terrorists and their family members with payments worth hundreds of millions of dollars annually. (In 2018, a New York Times correction acknowledged the PA’s exorbitant payments — to the tune of hundreds of millions of dollars — after outrageously dismissing the payments’ veracity as “far-right conspiracy theory.”) Imagine if just 10 percent of that sum was reallocated to the intellectually disabled. All of their needs would be met.
The official PA daily Al-Hayat Al-Jadida reported Aug. 11, 2022:

The position paper submitted by Dr. Morrar explained that one of the most important justifications for the postal bank’s existence is the provision of financial services to the prisoners, the wounded, and the families of the Martyrs, as the [PA] government is paying salaries to more than 11,000 prisoners and released prisoners in accordance with the Law of Prisoners and Released Prisoners No. 19 of 2004 – a [monthly] sum equal to 52 million shekels. [Translation by Palestinian Media Watch.]

As the Meir Amit Intelligence and Terrorism Information Center has reported:

According to a report prepared by the Israeli National Bureau for Counter Terror Financing (NBCTF) in the Israeli Ministry of Defense, in 2020 the PA transferred 597 million shekels ($181 million) to the families of Palestinian terrorist prisoners and shaheeds. The payment was made despite the PA’s severe budget deficit. According to Shukri Bshara, the Palestinian ministry of the treasury, during the first half of the year the PA’s deficit was $470 million (al-Iqtisadi, July 7, 2021).

Indeed, all the Palestinian Authority needs to do to provide sufficient funding to the intellectually disabled is to decide to take a portion of the “martyr” funds and transfer them to the vulnerable population.
According to Mike Pompeo, Stuart Force (father of terror victim Taylor and mover behind the Taylor Force Act) and Sander Gerber:

The PA employs some 550 people in its pay-for-slay bureaucracies and devotes over seven percent of its budget, or $350 million, to the program, compared to just $220 million for non-terrorist welfare programs. 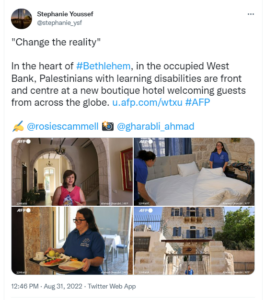 The plain facts are that the Palestinian Authority has chosen to fund terrorists and their families over the intellectually disabled and their families. AFP is either inexcusably oblivious to this reality or is deliberately concealing it with the facile determination that the Palestinian government has “insufficient funds” to address the needs of the latter population.
“It’s also to change the reality, to change the society” Mahera Nassar Ghareeb, the community leader of an NGO which supports Palestinians with intellectual disabilities, says to AFP, citing one of the project’s worthy goals.
Inshallah. May Ghareeb succeed. In a changed Palestinian reality, perhaps the intellectually disabled will have a fighting chance — even better than that of terrorists — to secure much needed government funding.