In a Technology article ironically titled “Is Facebook’s Campbell Brown a Force to Be Reckoned With? Or Is She Fake News?” New York Times journalist Nellie Bowles herself delivers up fake news, falsely characterizing the well-documented fact that the Palestinian Authority pays hundreds of millions of dollars to the families of terrorists as a “far-right conspiracy.”

Once those shows get started, Ms. Brown wants to use Facebook’s existing Watch product – a service introduced in 2017 as a premium product with more curation that has nonetheless been flooded with far-right conspiracy programming like “Palestinians Pay $400 million Pensions For Terrorist Families” – to be a breaking news destination.

As The Jerusalem Post‘s Lahav Harkov points out, “This is an item written in to the Palestinian Authority’s budget, not a ‘far-right conspiracy.'” 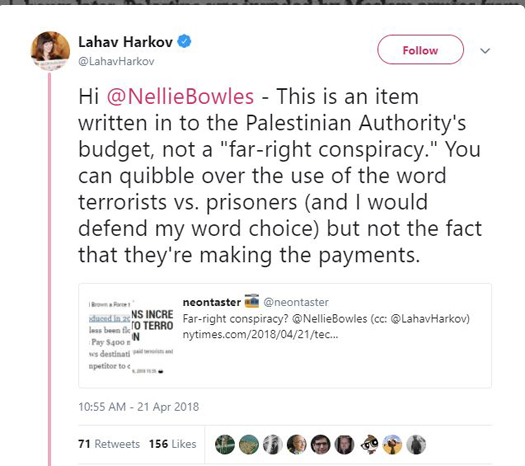 Moreover, does The Times’ Bowles consider her own paper part of the vast “far-right conspiracy”? The Times has repeatedly reported the fact that the Palestinian Authority pays the families of terrorists. See for example, the May 2, 2017 Times article (“G.O.P. Pressures Trump to Take Tough Stance With Mahmoud Abbas”) which confirms that not even the Palestinian officials try to deny that their government is providing the families of suicide bombers with funding:

The issue of payments to families of suicide bombers and others who commit violence has become a frequent complaint by Israel and its supporters. The Palestinian Authority spends about $315 million a year to distribute cash and benefits to 36,000 families, according to Sander Gerber, a New York hedge fund executive and fellow at the Jerusalem Center Public Affairs, who has studied the issue and brought his research to American lawmakers. . . .

Palestinian leaders defend the payments, saying they are meant to help widows and orphans of “martyrs,” as they call suicide bombers and others killed in attacks, as well as destitute families of prisoners, not to promote terrorism. . . .

But Mr. Rajoub also signaled that Palestinian leaders would be willing to reconsider the payments as part of a “broader negotiation.” . . . (Emphasis added.) 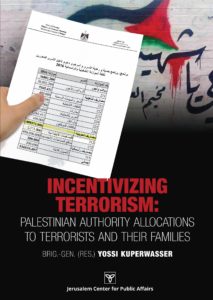 A booklet by the JCPA explores Palestinian pensions for terrorists. (Click image for more.)

But citing testimony, payroll records and other documents, the plaintiffs showed that many of those involved in the planning and carrying out of the attacks had been employees of the Palestinian Authority, and that the authority had paid salaries to terrorists imprisoned in Israel and had made martyr payments to the families of suicide bombers.

Syria and Iran, which support the Hamas leaders in exile, have no interest in a calm Israeli-Palestinian relationship, and they are masters at manipulating the third rail of Palestinian politics — the need to payrespect and honor to those who fight Israel and ”the occupation,” including prisoners and suicide bombers.

CAMERA has contacted Times editors to request a correction. Stay tuned for an update.

See also Liel Liebowitz in The Tablet: “All The Fake News That’s Fit to Print”

April 24 Update: CAMERA Prompts Correction: ‘That is Not a Conspiracy Theory’

A New York Times editor has thanked CAMERA for bringing the error to the paper’s attention. The Times published the following commendable correction in today’s print edition and also appended a version of the correction to the bottom of the digital article:

An article on Sunday about Campbell Brown’s role as Facebook’s head of news partnerships erroneously included a reference to Palestinian actions as an example of the sort of far-right conspiracy stories that have plagued Facebook. In fact, Palestinian officials have acknowledged providing payments to the families of Palestinians killed while carrying out attacks on Israelis or convicted of terrorist acts and imprisoned in Israel; that is not a conspiracy theory.

In addition, the false statement has been removed from the online article. It now reads:

Once those shows get started, Ms. Brown wants to use Facebook’s existing Watch product – a service introduced in 2017 as a premium product with more curation that has nonetheless been flooded with far-right conspiracy programming – to be a breaking news destination. The result would be something akin to an online competitor to cable news.

CAMERA gives a shout out to Twitter user Neontaster for first drawing public attention to this error.