Rasmea Odeh, who was convicted by an Israeli court for her role in a terror attack that killed two Jewish students, has been deported from the U.S. for lying on her immigration forms. Her image, however, and all that it represents, remain on a huge mural at Reem’s California bakery, despite protests. And now, Reem’s is getting an award from Food and Wine Magazine.

Reem’s is one of ten establishments that Restaurant Editor Jordana Rothman says the magazine “fell in love with this year” because they “offer a rich portrait of the people who made them.” The portrait of proprietor Reem Assil that Food and Wine paints, however, is directly at odds with the reality that Assil uses her bakery to lionize a terrorist. 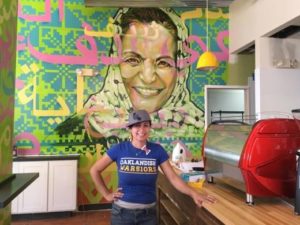 Odeh was involved in the 1969 bombing of a supermarket that killed two young men, Edward Joffe and Leon Kanner. She confessed to her role in the attack one day after her arrest. Her confession was corroborated by physical evidence, and her trial was attended by an observer from the International Red Cross who deemed it fair. Contrary to her claims, the trial judge found no evidence that she was tortured. The Legal Insurrection blog has fully documented the details of Odeh’s trial and conviction, the evidence that the conviction was proper, and the effect of her crimes on the victims’ families.

Food and Wine‘s review portrays Reem’s bakery as a haven of peace, harmony, and cultural understanding, saying that “food as a vehicle for healing is at the center of everything here.” About the proprietor, Reem Assil, Food and Wine tells us, “from an early age she understood food as a potent tool for empathy and connection.” Yet, neither Assil nor Food and Wine appears to have any empathy for Odeh’s victims or their families. How is the glorification of a terrorist in any way “healing”?

Michael Lumish, who has been involved in vigils for Odeh’s victims in front of Reem’s, wrote recently, “by venerating the antisemitic murderer Rasmea Odeh, Reem Assil is popularizing hatred for Jewish people in day-to-day retail spaces within the San Francisco Bay Area.”

Nor is Food and Wine ignorant of Odeh and her crimes. In a separate article reviewing Assil’s newest venture, a restaurant called Dyafa, Food and Wine makes only the vaguest reference to the controversy, reporting, “there won’t be a polarizing mural, like at Reem’s.” Yet, not only did they award Reem’s with the title “Restaurant of the Year,” the article detailing the award made no mention of the mural whatsoever, instead portraying Assil as someone involved in “healing.”

“I wanted to cultivate understanding in the most humane way possible—through food,” says Assil, who makes her case with orange blossom–scented cookies,spinach pastriesspiced with cinnamon and sumac, and warm flatbread bundling sujuk sausage. “I look around my restaurant on aSaturdayafternoon. I see Jews and Arabs eating together. I see people who are not politicized just enjoying a meal. And I think, this is what peace looks like.”

Others might disagree with the notion that peace looks like a mural of convicted terrorist Rasmeah Odeh.

After hearing from CAMERA members, Food and Wine Editor-in-Chief Hunter Lewis published a “Letter From the Editor,” noting the mural at Reem’s, and explaining that Rasmeah Odeh “was convicted in 1970 in an Israeli military court for her role in a supermarket bombing that killed two civilians and the attempted bombing of the British Consulate.” This is a good step, and CAMERA commends Food and Wine for taking it.

Another is Lewis’s continued insistence that “Reem’s is a place meant to build bridges, not burn them.” If proprietor Reem Assil truly wanted to build bridges, she would remove the mural of the convicted terrorist from her wall. Until she does, it is difficult to take seriously her claim that she “wanted to cultivate understanding in the most humane way possible.”