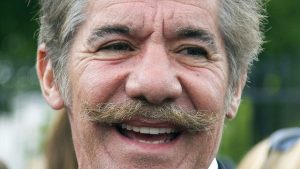 When Fox News Channel’s Geraldo Rivera discusses Israel, typically he poses as a friend of while adhering to his longtime theme that Israel is at fault in the conflict, victimizing the Palestinians. This is what happened March 30-31, 2018 on the network in appearances apparently related to promoting his book, The Geraldo Show: A Memoir.

His perception of the conflict may have been influenced by his longtime friend, Hanan Ashrawi, an articulate, persuasive Palestinian politician and propagandist (more below). 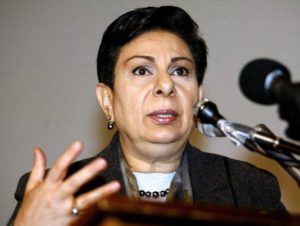 On The Five broadcast of Friday March 30, Geraldo was provided a platform for an unchallenged, uninterrupted diatribe prompted by Greg Gutfeld’s question: “Did you ever regret a story that you did?” Geraldo replied, “… I regret in 2002 backing down from backing the Palestinians in their conflict with Israel, the Second Intifada … .” Thus, he sides with murderous terrorists who committed numerous bombings and shooting attacks killing more than 1000 Israeli civiliansand maiming thousands more. Furthermore, as has been documented, Yasser Arafat and his Palestinian Authority led the planning, funding and execution of that intifada. None of this seems to concern Geraldo or any of his Five broadcast colleagues—Gutfeld, Kimberly Guilfoyle, Juan Williams, Jesse Watters or Dana Perino.

Geraldo continued, “I saw firsthand what an awful life that they live under—constant occupation and oppression. And people keep saying, ‘Oh! they are terrorists’ and oh! this and oh! that … and we just had 14, 15 Palestinians killed in Gaza by the Israeli forces. [The people of the Gaza Strip are an] occupied people … ”

However, Geraldo ignores the fact that Israel had not had any occupation personnel in the Strip since September 2005, when shortly thereafter it came under frequent and continuous attack by Hamas by mortars and rockets and, more recently, by attempted infiltration by way of numerous terror tunnels. Meanwhile, Israel has continued to allow large quantities of food, medicine and other humanitarian aid into Gaza despite Hamas’ aggression. The Palestinian leadership of the strip, however, has refused to abide by the first requirement of international law: non-aggression against neighbors.

Likewise, Geraldo ignores evidence that the “protest” was organized by Hamas in cooperation with other terror groups. Hamas leaders Ismail Haniyeh and Yehya Sinwar announced that this operation was a step in “liberating all of Palestine, from the river to the sea,” meaning the elimination of the Jewish state.

Geraldo’s portrayal of an oppressive Israeli army mowing down peaceful civilian demonstrators at Israel’s border with the Gaza Strip is at odds with the evidence. He failed to mention that it seems that at least 10 of the persons killed have been identified as known Islamist terrorists. He also ignored evidence that some protesters fired on troops and attempted to break through the border fence. This is further corroborated. Geraldo avoided such possibilities, preferring instead to vilify Israel.

Geraldo’s phrasing, “constant occupation and oppression,” is misleading. First, there is disagreement about application of the term ‘occupation’ in connection with the West Bank. While it’s generally accepted that a military occupation exists in parts of the West Bank, it’s argued that the application of the term is problematical since it falsely implies that Israel took this land from a sovereign nation and ignores Israel’s historical relationship to the West Bank that predates the existence of Arab communities in the land by thousands of years.

Furthermore usage of the term with respect to Israel can be viewed as unfair since other regions under similar circumstances, such as Cyprus and Tibet, are generally not described as “occupied.”

Communities of Jews have continuously lived in their ancestral home in the Holy Land including the entirety of Jerusalem and the West Bank (Judea and Samaria). Additionally, scholars (Joan Peters in “From Time Immemorial,” among others) have shown that most of those who today identify as “Palestinians” descend from relatively recent migrations from surrounding territories. In fact, it’s likely that the Arab population began to blossom only well after the beginning of substantial Jewish immigration in the 19th century.

In 1948, the Jewish nation of Israel, as authorized by the United Nations in 1947 and by previous international rulings, was re-established with the capacity of caring for Jewish refugees form Nazi horrors. Israel had sought to accommodate the Arabs but was immediately rebuffed by Arab Armies that attempted to annihilate the Jewish state. And thereafter Arab forces attacked, or gathered to attack, Israel several times in order to destroy it. This has included aggression and terrorist attacks emanating from the West Bank.

The West Bank is disputed land. Israel is the obligatory and legal military authority of the West Bank, having taken the territory from Jordanian occupation in self-defense in the 1967 Six-Day War. The land is not “Palestinian.” It is disputed. Hence the need for Israeli-Palestinian negotiations according to U.N. Security Council Resolutions 242 (1967) and 338 (1973), and the 1995 Israeli-Palestinian interim agreement.

But the Palestinian Authority insists on various conditions unlikely to be accepted by any Israeli government before peace negotiations can take place, including Israel abiding by Palestinian refusal to recognize Israel as a Jewish state (evidently, 22 Arab Muslim states is fine but one Jewish state is one too many) and Israel’s acceptance of a “right of return” (that does not exist in international law) for millions of Arabs (nearly all of whom have never lived in Israel), which would inevitably result in the Jewish state becoming unviable.

As to the alleged “oppression,” the Palestinian Authority governs the daily lives of the Palestinian population in the West Bank, while Israel controls the borders and polices the settlements, only entering Palestinian communities to pursue terrorists. Apparently this alleged “constant occupation and oppression” is unable to prevent PA encouragement of murderous attacks on Israeli citizens by generously rewarding the Palestinian terrorist perpetrators and their families. The United States has been providing financial aid to the PA but Congress passed legislation on March 23, 2018 (The Taylor Force Act) to prevent American tax dollars from being used to encourage Palestinian terrorism.

Meanwhile, while it’s true that the residents of the Gaza Strip are “oppressed,” that oppression is perpetrated by its Hamas dictatorial rulers who allow no opposition to their Islamist rule.

Geraldo’s next vilification of Israel occurred the next day, March 31, on “Fox & Friends” at 9:24 a.m. (Eastern) when he joined Abby Huntsman, Pete Hegseth and Ed Henry. Only Hegseth challenged Geraldo. Hegseth responded appropriately, “The keepers of the concentration camp are Hamas not Israel,” to Geraldo’s description of the Gaza Strip as “the world’s largest concentration camp,” implying Israel was responsible for hardships suffered by residents of the Gaza Strip. Hegseth responded, “You can’t negotiate with Hamas. They’re a terrorist organization that says they want to wipe Israel off the map,” to Geraldo’s allegation that due to Israel, for the Palestinians in the Gaza Strip, “Their lives have been controlled since the 1967 war.”

Here, Geraldo repeats erroneous assertions, again ignoring the fact that Israel pulled all its troops and all Israeli residents out of the Gaza Strip in September 2005 while continuing since then to allow large quantities of food, medicine and other humanitarian aid into Gaza while blocking various dangerous incoming materials that could be used to attack Israel.

In his March 30/31 castigation of Israel, Geraldo revisited a familiar role. Among previous such Geraldo propaganda bursts are these: In 2012, he fawned over West Bank Palestinian Hanan Ashrawi in a Geraldo at Large Fox News Channel special, “Israel Caught in the Crossfire,” filmed in Israel and the Palestinian territories, that aired on July 8, 2012 (10 p.m. Eastern). The hour-long documentary — with Geraldo reporting mainly from Israel and his brother Craig reporting from the Gaza Strip and the West Bank—dealt with several issues including the chances for a peace agreement between Israel and the Palestinian Arabs leading to a “two-state solution.” Describing Ashrawi as “a friend I have known for decades,” Geraldo indulged her anti-Israel disinformation. This long-time Geraldo friend has been a long-time anti-Israel propagandist and continues as such.

Ashrawi has discredited herself a number of times. For example, as the only known professing Christian in the otherwise Muslim leadership of the Palestinian Authority in the West Bank, Ashrawi gave a press conference in 1991 in which she replied to a question in self-righteous indignation, “I find your reference to ‘Judea and Samaria’ a statement of extreme bias, and rather offensive. I am a Palestinian Christian, and I know what Christianity is. I am a descendant of the first Christians in the world, and Jesus Christ was born in my country, in my land. Bethlehem is a Palestinian town. So I will not accept this one-upmanship on Christianity. Nobody has the monopoly.” (The Washington Post, “The Practiced Palestinian,” Caryle Murphy, Nov. 4, 1991)

But if Ashrawi is in fact a “descendant of the first Christians in the world,” as she describes herself, she would be a descendant of ancient Israeli Jews not the descendant of Arabs as she is presumably. Furthermore, although Ashrawi denies the existence of Judea and Samaria, Israel’s names for the West Bank, the names are mentioned in the Christian New Testament in well known passages Matt. 2:1 and Acts 1:8 in the context of land resided in by Israeli Jews (this was perhaps a thousand years before the establishment of the first Arab communities in the Holy Land which happened well after conquering Muslim Arab armies had swept across the continent from the Arabian Peninsula in the seventh century C.E.). Evidently, Ashrawi is either ignorant or deceitful about all this. This is Geraldo’s longtime friend whose influence is likely to have led to his misperception of the conflict with the Palestinians.

Interestingly, Geraldo is not the only well-known American television personality who may have fallen under Ashrawi’s spell to mislead viewers about Israel. Former ABC News anchor Peter Jennings, when he was head of the ABC bureau in Beirut, Lebanon in the 1970s, had a serious relationship with Ashrawi in Beirut where she was a graduate student in literature at the American University. This relationship was reported, according to the Nexis journalism database, by U.S. News & World Report in 1991, Washington Post of Sept. 17, 2001 and Daily Mail (London) of Sept. 20, 2001. Jennings frequently misreported and fabricated information about the Israeli-Palestinian conflict beginning in the 1970s and later during his career as anchor for ABC’s “World News Tonight.”

In March 26, 2010, Geraldo launched verbal assaults on Israel in an appearance on Fox & Friends in which he accused an allegedly anti-peace, obstructionist Israel of focusing on the Iranian threat in order to divert attention from its own supposed intransigence. His tirade also included the baseless allegation that Israel is responsible for American difficulties vis-a-vis the entire Middle East and the Muslim world.

Geraldo Rivera is generally persuasive on issues he speaks about. His on-air disinformation about the Palestinian-Israeli conflict should immediately be balanced on air with factual information. This is warranted because even one instance of unchallenged disinformation is one too many in terms of planting seeds of antipathy towards Israel in the minds of vulnerable individuals among the millions of FNC viewers.