Christiane Amanpour’s broadcast of Jan. 22, 2021 featured an unbalanced panel discussion about the Israeli-Palestinian conflict. The discussion was based on the documentary film “The Human Factor” by Israeli filmmaker Dror Moreh. The film purports to cover the “thirty-year effort to secure peace in the Middle East.”

In addition to Moreh, the panel consisted of Gamal Helal, an Arabic translator for several U.S. presidents and Aaron David Miller, a former U.S. negotiator for Arab-Israeli peace negotiations.

Note: This CAMERA report deals only with the discussion based on the film — not the film itself — that’s for another day.

Prompted by Amanpour, the panel was united in speculating that the Oslo peace process would have continued on track had it not been for the 1995 assassination of Israeli Prime Minister Yitzhak Rabin. But the discussion omitted how the Palestinian leadership has significantly contributed to the failure of the Oslo process (more below). 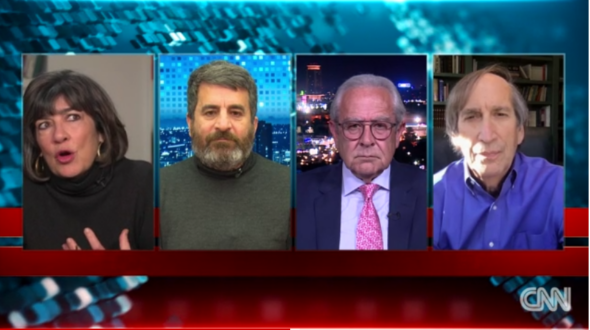 After some preliminaries, Amanpour got down to business — starting with suggesting that the U.S. side was unfair to the Palestinians:

Do you think that the American negotiators had enough empathy, particularly for the Palestinians, when you were being the so-called third-party honest brokers?

I think we did, in fact, get too close to the Israelis. That may well have been a function of the fact that they control the territory and our sensibility that we needed, certainly on the security side, to take their requirements into account.

What was important to Palestinians above all was respect. We tried, but I’m not sure we delivered.

Amanpour brought up the Rabin assassination,

November 4 [was] the day that Yitzhak Rabin was assassinated in 1995. And with it, many say, went the last greatest hope for a peace deal. Tell me about Yitzhak Rabin.

Look, for me, the assassination of Rabin meant the beginning of the collapse of all the peace process… Rabin said, “… when I reach the point where I will have to give the Palestinians what I need to give, I’m afraid there’s going to be a civil war.” And he almost predicted exactly what almost happened in Israel. With the height of the demonstration against Rabin, the height of the Oslo process, there was almost a civil war in Israel… And we are downhill from that day on until today.

Rabin’s assassination provided the critical highpoint, frankly, low point. But until that time, Oslo was on track.

If you look at the Trump administration, and the people who were in charge of Arab-Israeli negotiations or Palestinian-Israeli negotiations, they were all Jewish, they were all trying to basically throw away the elements that the conflict was based on. And they basically did everything that no Israeli government would ever dreamt of, moving the embassy, sort of like throwing the Palestinian Authority under the bus, and not recognizing that… I think the Palestinians have matured and they have learned their lessons. They believe — and I am in contact with them all of the time, they believe also that the Clinton parameters were also a missed opportunity. Camp David was a missed opportunity. But they are not the only party to be blamed for Camp David, the Israelis are equally to be blamed equally for it.

This unbalanced discussion erroneously claimed or implied that the Oslo peace process died with Rabin in 1995. In fact, Israel continued to implement actions meeting Palestinian peace-related demands while the Palestinian leadership continued to demonstrate its unwillingness to abide by the Oslo Accords with numerous violations of the treaty.

Moreover, the historical record shows that the single most important factor that determined the fate of Oslo was repeated Palestinian rejection of Israeli peace offers that would have provided for the creation of a Palestinian state.

Panelist Helal, unchallenged by either Amanpour or his fellow panelists, stated problematically that the Trump administration officials in charge of negotiations “were all Jewish [and] trying to basically throw away the elements that the conflict was based on.” (This occurs at six minutes into the video clip of the discussion.)

But has Helal ever pointed out the impact of religion or ethnicity upon any other U.S. diplomats including those of Arab or Muslim backgrounds involved in Middle East matters? For example, George J. Mitchell, a contemporary of Helal, was a politician turned diplomat who served in the Clinton and Obama administrations. Mitchell, involved in Middle East matters, criticized Israeli policy on settlements as well as Palestinian violence toward Israelis. Helal has never publicly asserted or hinted that Mitchell’s background could interfere with his responsibilities. That background (his Arab mother emigrated to the United States in 1920 from Lebanon and his father had been adopted by a Lebanese-American family when he was orphaned) earned recognition for Mitchell as a “prominent Arab-American.”

Helal’s remark is disturbing, particularly since it was met with silence from the other three participants.

Helal was also unchallenged when he insisted that it is unfair to the Palestinians that the U.S. embassy was moved to the capital city of Israel. But U.S. embassies are normally, if not always, located in capitals. Why has the long overdue move generated such gnashing of teeth among some western critics of Israel (including in the media) while generating only a mild response from Arab countries allied with the Palestinians? Furthermore, in the entirety of history, Jerusalem has been the capital of only one people – the Jewish people.

Helal had complained, “What was important to Palestinians above all was respect. We tried, but I’m not sure we delivered.” But what is his evidence for this? That question, along with many others, went unasked.

For many years, the thrust of Amanpour’s Israel-related segments has been to shift the onus from the Palestinians to Israel. Biasing the network’s viewers against Israel is nothing new for Amanpour and CNN as CAMERA has extensively documented for decades.