Where to begin with Chris Hedges’s latest unhinged rant? Perhaps by asking whether the folks at Salon have any shame. Even setting aside Hedges’s history of disdain for factual accuracy and past employment with Russian propaganda outlet RT America, his latest rant should’ve gone straight to the trash bin of any respectable media outlet.

Instead, on July 19, Salon published his “commentary,” which is a somewhat charitable way to describe the 2,000+ word hate screed for the United States and Israel, entitled “Final act of empire? U.S., Israel and the Saudis now heading for war with Iran.”

Start with some of the blatant factual inaccuracies written by Hedges and published by Salon.

Hedges claims there are “Jewish-only settlements” in Israel. This is false. Israeli law prohibits such discrimination. The Israeli Supreme Court itself has made this clear, ruling in Ka’adan v. Israel Lands Administration that the state may not discriminate on the basis of religion or nationality in allocating state land. There is an exception, however. In Avitan v. Israel Lands Administration, the Supreme Court held the government could discriminate in favor of Bedouin Arabs. In other words, while there can be no such thing as a “Jewish-only settlement” in Israel, there can be a “Bedouin Arab-only settlement” in Israel.

Hedges also writes, “The U.S. offers shameless support for Israel’s right-wing government…” In fact, the current government, far from being “right-wing,” is made up of a broad coalition of parties from across the political spectrums. The current prime minister is Yair Lapid from the left-leaning Yesh Atid party. Other left-wing parties, like Meretz and Labor, are also members of the coalition government.

Also included is the Arab/Islamic Movement party United Arab List (also known as Ra’am). The sweeping assertion of an Israeli “right-wing” government, which ignores the role of an Islamist party in the current coalition, is particularly notable given Hedges’s suggestion that Israel “makes war on Muslims.”

Referencing the ongoing covert (and at times, overt) conflict between Israel and Iran, Hedges asserts, “Only Iran’s decision not to retaliate, beyond lobbing about a dozen ballistic missiles at two military bases in Iraq, prevented a conflagration.” Aside from suggesting that Israel has been the aggressor against Iran, which openly threatens to destroy the Jewish state, the claim absurdly suggests that the only action taken by Iran has been to launch missiles at Iraqi territory. This ignores, among countless other violent attacks on Israeli and Jewish civilians by Iran:

Hedges’s omission of the April 2020 incident, involving the attempt to poison Israelis via a cyberattack on water infrastructure, is particularly notable given the author found the space to allege that, “In 1991, a U.S.-led coalition destroyed much of Iraq’s civilian infrastructure, including water treatment facilities…”

Then there is the recently popular claim, promoted in Hedges’s rant, that “Israel assassinated Palestinian journalist Shireen Abu Akleh.” As even the New York Times investigation, which suggests the bullet came from an Israeli position, acknowledges, they “found no evidence that the person who fired recognized Ms. Abu Akleh and targeted her personally.” Additionally, they were “unable to determine whether the shooter saw that she and her colleagues were wearing protective vests emblazoned with the word Press.” Many uncertainties also remain as to who even fired the bullet. For example, the Palestinian Authority’s own investigation claimed the bullet was fired from a type of rifle the Israeli Defense Forces don’t even appear to use. Hedges’ claim of “assassination” is speculation couched as a factual assertion.

Hedges also writes, “Israel launches repeated murderous assaults against the civilian population in Gaza…” Exposing the type of “credible” sources Hedges relies on, the word “launches” links to a documentary co-produced by Assad apologist Max Blumenthal. For those unfamiliar with Blumenthal, a list of just some of his blatant lies was detailed here by CAMERA’s Gilead Ini.

But aside from his poor choice of sources, the claim is factually false. The latest war, in May 2021, wasn’t “launched” by Israel. Rather, it began with a barrage of some 154 rockets fired from Gaza at Israeli civilian centers. Moreover, as should go without saying, suggesting Israel’s war was “against the civilian population” is an inversion of reality. As even Matthias Schmale, then director of the United Nations Relief and Works Agency in Gaza, admitted:

“I have the impression that there is a huge sophistication in the way the Israeli military struck over the last 11 days, so that’s not my issue… So yes, they didn’t hit – with some exceptions – civilian targets, but the viciousness, ferocity of the strikes was heavily felt.”

Moreover, an analysis by the Meir Amit Intelligence and Terrorism Information Center found that of the 234 Palestinians allegedly killed during the war, 112 of them belonged to a terrorist organization, while at least 21 were killed by Palestinian rockets misfiring. Many of the remaining casualties occurred in unclear circumstances. Given the firepower available to the Israeli Defense Forces, any “murderous assault against the civilian population in Gaza” would have to have been wildly unlucky to miss so many civilians and instead hit such a high percentage of terrorist operatives.

Notwithstanding the factual inaccuracies written by Hedges and published by Salon, the piece hits the zenith of unhinged when it repeatedly attempts to link the Jewish state to various evils.

For example, Hedges writes, “The preparation for war mirrors the Israeli pressure on the U.S. to invade Iraq…” The word “pressure” links to an article about how Benjamin Netanyahu told Congress, in 2002, “I think the choice of Iraq is a good choice, it’s the right choice.” Somehow, agreeing with a policy is “pressure.”

What makes Hedges’s assertion even more preposterous, however, is that Netanyahu wasn’t even a government official at the time. After an election defeat, Netanyahu had temporarily retired from politics in 1999 and would not become a part of the government again until 2003. 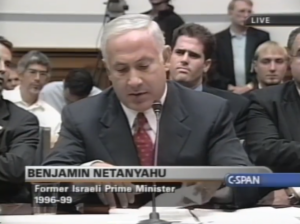 A screenshot of Benjamin Netanyahu speaking to the U.S. Congress in 2002.

The elevation of the act of a private Israeli citizen giving an opinion, which many in the United States and abroad shared at the time (rightly or wrongly), into sinister machinations of the Jewish state “pressuring” the United States into invading Iraq reeks of classic conspiracy theories of Jewish control.

Hedges flirts with such conspiracy theories elsewhere, too, writing:

“Saudi Arabia, Israel and the U.S. function as a troika in the Middle East. The Israeli government has built a close alliance with Saudi Arabia, which produced 15 of the 19 hijackers in the 9/11 attacks and has been a prolific sponsor of international terrorism…”

What, exactly, the 9/11 attacks have to do with the Israeli government building a “close alliance” with Saudi Arabia (a weird claim to make considering the two still don’t even have normal diplomatic relations) is unclear and completely out of place. While Hedges never makes any direct assertion, the odd placement of those two clauses together comes across as trying to create in the reader’s mind a link between the Jewish state and 9/11.

In the end, Hedges’s ramblings attempt to create a picture in which all that ails the Middle East is the dastardly Americans, Israelis, and Saudis. Hedges writes:

“The corpses of civilians, including children, piled up by Israel and Saudi Arabia, who do much of their killing in Gaza and Yemen with U.S. weapons, don’t come close to the hundreds of thousands of dead we [the United States] have left behind in two decades of warfare in the Middle East.”

No mention is made of Iran’s role in arming the Houthis, who regularly recruit child soldiers and indiscriminately shell civilian areas. Nor of the efforts by Gaza-based terror groups to deliberately kill civilians.

In Hedges’s world, murderous terrorist groups from Islamic State to the Islamic Revolutionary Guard Corps and its many proxies have no independent role or agency. Nor do murderous regimes like those of the Ayatollahs, Bashar al-Assad, and Saddam Hussein, or even Vladimir Putin in Syria.

In Hedges’s worldview, they are all but mere aimless objects at the mercy of the cruel Americans, Israelis, and Saudis.

Based on his latest piece for Salon, it appears Hedges understands the only way to support such a superficial worldview is by falsifying the record.