In a gross violation of journalistic ethics and the network’s own published guidelines which require that “commentaries shall be clearly separated from news,” a Deutsche Welle Arabic television anchorwoman editorialized that the Palestinian Authority’s claim against Israel at the International Criminal Court is “a step we have been waiting for a long time.” 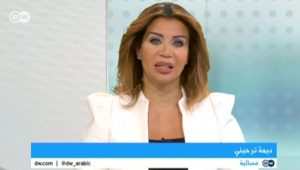 In the Sept. 10 broadcast of “Massaiya on DW,” the Arabic-language evening news magazine of Germany’s public international broadcaster, moderator Dima Tarhini was discussing the American closure of the Palestine Liberation Organization office in Washington, D.C., when she failed to filter out her personal views. Speaking with her two guests, a diplomat from Ramallah and a George Mason University professor residing in Washington, D.C., Tarhini breached the journalistic imperative to refrain from editorializing, stating (just over 14 minutes into the broadcast):

However the Palestinian side,  Dr. [Mohammed] Cherkaoui, has turned to the International Criminal Court, and this was previously, I mean, a step we have been waiting for a long time, and now they have done this and it seems that there are several issues [that can be tackled through such ICC lawsuits], like raising the case of Khan Al-Ahmar in front of the court… Shouldn’t that at least be credited to the Palestinian side, since this is what has [indeed] invoked anger in the American side because it might incriminate Israel, according to what the analysts say? [What is] your take [on the matter], being the expert of international affairs?

All Deutsche Welle news programs, regardless of the language in which they were broadcast, are subject to the standards set by the Bundestag’s Deutsche Welle Act of 2004, which mandate (chapter 1.2, section 5, article 2&3):

2. The programmes must enable the public to form independent opinions, and must not one-sidedly support a party or other political association, a religious community, a profession or community of interest. The moral, religious and ideological convictions of radio and television consumers shall be respected.

3. Reporting shall be comprehensive, truthful and factual and shall be done in the awareness that Deutsche Welle programmes affect the relationship of the Federal Republic of Germany with other countries. Origin and contents of news items intended for publication shall be checked with due care. Commentaries shall be clearly separated from news and made recognisable as such, indicating the author’s name.

Tarhini’s expression of her personal support for the anti-Israeli Palestinian bid at the ICC is a clear breach of the guidelines laid down by the German parliament.