CAMERA Arabic’s protracted efforts have prompted Deutsche Welle to remove an Arabic-language backgrounder about Jerusalem which contained multiple factual errors concerning the holy city and the conflict surrounding it. Originally published in May 2021, the problematic item periodically reappeared alongside newer Deutsche Welle Arabic items despite CAMERA’s repeated requests for correction, the first of which was submitted to Germany’s public broadcaster last November. Most recently, the backgrounder was embedded in a DW Arabic webpage on Feb. 9, 2022.

The errors were as follows (all translations, emphases and in-bracket remarks are by CAMERA Arabic):

Slide No. 1 collectively identified Jews involved in the May 10, 2021 clashes in Jerusalem as “settlers,” referring to “clashes between Palestinians on the one hand and the police and settlers on the other.”

However, the Jews’ places of residence were not known — and thus their status as “settlers” was undetermined — and not relevant to the story. Media outlets which previously corrected identical or similar Arabic errors in 2021 include CNN and BBC.

Slide No. 6 misrepresented Jerusalem’s holy sites, their history and location, stating: “The Jews believe that the al-Aqsa Mosque was built instead of a Jewish shrine (the Temple) which the Romans destroyed in 70 AD, with no remnant left but the Western Wall, [also] known as the Wailing Wall or al-Buraq.”

However, Jews don’t just “believe” that the Temple once stood where Jerusalem’s Noble Sanctuary/Temple Mount is found today; its presence up until its 70 AD destruction is a well documented fact of ancient history and archaeology.

In addition, the al-Aqsa Mosque is adjacent to the southern wall of the compound, whilst the Temple was located at its very center where the Dome of the Rock is found today. Therefore, the Mosque was not “built instead” of the Temple, as the backgrounder indicated.

Furthermore, the Western Wall was not a part of the Temple itself; it was a retaining wall for the plaza on which the Temple stood.

Moreover, the Western Wall is not the last remaining part of the old Temple complex. In fact, there are many extant remains from the complex including the southern, eastern and northern retaining walls. Extant features abutting the southern wall include a broad stairway leading up to the Temple Mount’s entrance and two gates, known as Huldah Gates, which provided access to the Temple Mount. Some of the interior part of the Herodian Double Gate (which is one of the Huldah Gates) is also still intact. In addition, an area called “Robinson’s Arch,” in the south-western corner of the Temple complex, still remains. The New York Times recently corrected the latter two points. 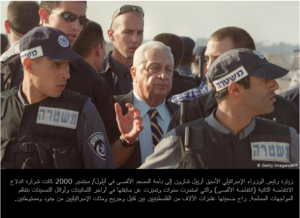 The most egregious error, though, in slide No. 9 (screenshot at left), falsely averred that all Israeli victims in the second Intifada were “soldiers and settlers.” The slide fabricated: “Its [the Intifada’s] victims toll turned out to be tens of thousands of Palestinians killed and wounded, and hundreds of Israeli soldiers and settlers.”

In communication with editors, CAMERA Arabic urged the network’s Arabic department to uphold Deutsche Welle’s own guidelines and correct the backgrounder’s multiple errors.

Finally, in late February, Deutsche Welle completely removed the Jerusalem backgrounder. That move comes in the wake of the network’s recent important steps to address anti-Jewish and anti-Israel bias at the organization, including among staff at the Arabic platform.