Haaretz editorial writers posit with great conviction that the citizenship law passed by Israel’s Knesset last week applies to Arab citizens but not Jewish citizens. In both English and Hebrew, the March 12 editorial (in print March 13, with the headline “The racism law”) opens with great certainty and little accuracy:

The citizenship law, adopted in its second and third readings by the Knesset on Thursday, is a racist and anti-democratic law which distinguishes between Jewish and Arab citizens, preventing Arabs from enjoying benefits reserved for Jews.

The law does not allow Arab Israeli citizens who marry Arabs from the West Bank to form a family in Israel,

since it prevents West Bank partners from obtaining legal status in Israel following their marriage to an Israeli citizen, a status afforded to partners of Jewish citizens. (Emphasis added.) 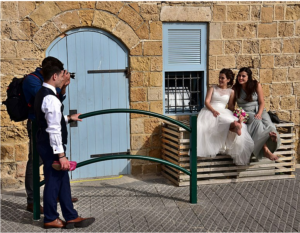 It’s too bad that the editorial writers did not consult Haaretz‘s own explainer about the law, published the very same day as the editorial. Had they done so, perhaps they would not have argued that the law applies only to Arab citizens who marry West Bank Arabs. Indeed, the backgrounder’s subheadline accurately states: “The new law replaces temporary legislation that barred Palestinians who marry Israeli nationals from resident status in Israel.” Haaretz‘s Noa Shpigel correctly cited marriage to Israeli nationals, not just Israeli Arabs. The explainer rightly reports: “In 2002, during the second intifada, the cabinet suspended naturalization for West Bank Palestinians married to Israelis . . . ” Again, note the marriage to Israelis, and not specifically Israeli Arabs.

There’s no need to take CAMERA’s word for it. Just ask Jewish Israeli Sari Bashi (aka Umm Fora) whose husband Osama is not eligible for Israeli citizenship, as she detailed in Haaretz. Mya Guarnieri, another Jewish Israeli married to a Palestinian, wrote in The Washington Post about how the law affects her marriage.

In practice, most of those affected are Arab citizens of Israel as only a tiny percentage of Israelis who marry West Bank and Gaza Strip Palestinians are not Arab, but it is inaccurate to characterize the law as applying only to Arabs.

Last year Agence France Presse corrected after making the identical error. Yesterday CAMERA contacted Haaretz to request correction of the editorial, in both English and Hebrew. As of this writing, editors have yet to correct. Stay tuned for any updates.