CAMERA’s Israel office yesterday prompted correction of a Deutsche Welle English-language article which erroneously stated that under United Nations Resolution 194, Palestinian refugees are guaranteed the “right to return.” A Nov. 19 article on the English-language site of Deutsche Welle, a German public state-owned international broadcaster, erred (“UN Agency for Palestinian Refugees on the Verge of Collapse“):

In 2018, President Donald Trump deferred payment of US yearly contributions of more than $300 million, taking umbrage generally with UN resolution 302, which pertains to the establishment of UNRWA, and specifically with resolution 194. Under that resolution, Palestinians are guaranteed the right to return to their home country – an issue that has long been a thorn in the side of both Israel and the Trump administration. 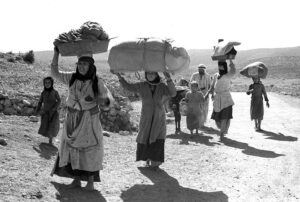 There are multiple factual errors in the second sentence. Given that it was passed by the General Assembly, as opposed to the Security Council, the resolution does not have the authority to “guarantee” anything. Indeed, its language — “should be permitted” — denotes a suggestion, not a guarantee. The section of the resolution dealing with refugees states:

RESOLVES that the refugees wishing to return to their homes and live at peace with their neighbours should be permitted to do so at the earliest practicable date, and that compensation should be paid for the property of those choosing not to return and for loss of or damage to property which, under principles of international law or in equity, should be made good by the Governments or authorities responsible;

INSTRUCTS the Conciliation Commission to facilitate the repatriation, resettlement and economic and social rehabilitation of the refugees and the payment of compensation, and to maintain close relations with the Director of the United Nations Relief for Palestine Refugees and, through him, with the appropriate organs and agencies of the United Nations;

Notably, the resolution conditions the return of refugees (Palestinian refugees are not specified, and therefore the resolution equally applies to Jewish refugees from Arab countries) on their willingness to “live at peace with their neighbours,” a condition that was not accepted by the Palestinian leadership or the vast majority of the refugees themselves who invoked Resolution 194. Furthermore, the resolution placed repatriation, resettlement and compensation on equal footing; meaning that return is one of several possible options.

In addition, the resolution suggests a “return to their homes,” not “home country,” as cited in the article. The Palestinians never had a country, including before Israel’s establishment.

Finally, the main part of the resolution called for the establishment of a Conciliation Commission, which convened in Lausanne, Switzerland, in 1949. While both the Arab states and Israel attended, the former declined to negotiate directly with the Jewish state and rejected any agreements.

As for the “thorn in the side” better known as the purported Palestinian “right of return,” it’s not just Israel and the Trump administration which have rejected the wholesale “return” of millions of Palestinians (at most some 30,000 original refugees who are still living plus their millions of descendants) into homes that no longer exist in what is now Israel. All those who care about Israel’s continued existence see a so-called Palestinian “right of return” as an existential threat. As President Obama had said:

. . . if we’re going to achieve a two-state solution the Palestinians are going to have to recognize that the right of return as they’ve understood it historically would extinguish Israel as a Jewish state and that’s not an option.

In response to communication with CAMERA, Deutsche Welle forthrightly set the record straight, giving the text in question an overhaul. The amended text now correctly states that the Trump administration takes umbrage with UNRWA and its mandate (as opposed to with UN Resolution 194) and that the President’s opposition to the “right of return” has long been the White House’s position. In addition, the revised no longer makes the false claim that UN Resolution 194 “guarantees” a Palestinian “right of return.” The amended text now states:

In 2018, President Donald Trump deferred payment of US yearly contributions of more than $300 million, taking umbrage generally with UNRWA and its mandate. Among other things, the Trump administration is at odds with the organization over the right of return for Palestinian refugees, an issue that has long been a thorn in the side of both Israel and the White House.

Furthermore, editors commendably appended the following correction to the bottom of the article:

Correction: This article was amended on November 23 to further clarify aspects about the Trump administration deferring payments to UNRWA.

CAMERA Corrects: This post was amended on Nov. 29 to add a link to a backgrounder with more information on UN Resolution 194 and to correct the erroneous statement that the Arab states refused to establish the Conciliation Commission. Since the commission’s establishment was not up to the Arab states, they were unable to reject its founding, though they refused to participate in direct negotiations with Israel and to reach an agreement.
For the Arabic version of this post, see CAMERA Arabic.