Five years after commendably broadcasting an on the air clarification concerning maps which falsely depicted Israel as having dispossessed Palestinians of their territory, MSNBC again gives a platform to anti-Israel propaganda which pushes the false narrative of Israeli dispossession of Palestinian-owned land.

The bottom line is that the first map showed the area as if it was a Palestinian state. The word across the map was Palestine. It was all, it looked as if it was all full of Arabs. And then the succeeding maps then showed fewer and fewer, less and less land all the time. Whereas bottom line was it was completely wrong. I mean, there was no state called Palestine. In 1946, it was a British mandate land. Britain was given control of the area by the League of Nations. And as a matter of fact, at that time roughly in that area, this is my estimate, there was about a half a million Jews living there and a million Arabs. So if anything the map should have reflected that demographic reality and it didn’t. And it gave the wrong impression.

In Friday’s broadcast, MSNBC’s Ayman Mohyeldin, together with interviewee Mohammed El-Kurd, managed to falsely grant ownership of a disputed house to a Palestinian family in eastern Jerusalem much like the deceptive maps falsely conjured up a state of Palestine. The bottom line is the same: in both cases, MSNBC falsely depicted Israeli possession of Palestinian property. In 2015, the network corrected, and ought to do so again in 2020. 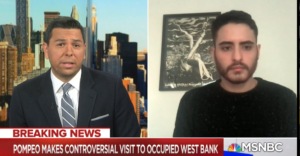 Moyheldin (at left) with El-Kurd

The recent Nov. 20 broadcast focuses on the story of Mohammed El-Kurd, “whose family was forcefully evicted from a part of their home by Israeli settlers back in 2009. They are now facing a complete eviction following an Israeli court order.” Mohyeldin prompts his guest: “What has the situation been like for your family and the Palestinian people over the past few years?”

Of the eviction from the home in the eastern Jerusalem neighborhood of Sheikh Jarreh, El-Kurd responds emotively:

This is my second time getting thrown out of my home by Israeli settlers. And this is the third time for my father who is 76-years-old. My grandmother died a few months ago, and this would have been her fifth time getting her home stolen by Israeli settlers. And it breaks me to say this, but I’m glad she is dead not to have to  deal with the anxiety, and sleeplessness and indignity and violence of the Israeli settlers and Israel. And in truth this is the reality for thousands and thousands of Palestinians. This is just one part of a larger effort to take over Palestine and erase all Palestinian presence from our native city. Life is unbearable right now for us.

In case the point wasn’t clear, Mohyeldin emphasizes: “As you’re very well aware the issue of Palestinian dispossession of land has been going on for years.”

But the key point that Mohyeldin and El-Kurd carefully conceals from readers in this story of Israeli settler dispossession of a Palestinian home is that Israel’s High Court has found that the El-Kurd family does not own their home, and that the property is Jewish-owned. Researcher and journalist Nadav Shragai wrote about the Sheikh Jarrah land, which Jews historically referred to as Shimon HaTzaddik, named after the Second Temple era High Priest, Shimon Ben Yochanan, who is buried there:

While the property was owned by Arabs for many years, in 1876 the cave and the nearby field were purchased by Jews, involving a plot of 18 dunams (about 4.5 acres) that included 80 ancient olive trees.The property was purchased for 15,000 francs and was transferred to the owner through the Majlis al-Idara, the seat of the Turkish Pasha and the chief justice. According to the contract, the buyers (the committee of the Sephardic community and the Ashkenazi Assembly of Israel) divided the area between them equally, including the cave on the edge of the plot.

Dozens of Jewish families built homes on the property. On the eve of the Arab Revolt in 1936 there were hundreds of Jews living there. When the disturbances began they fled, but returned a few months later and lived there until 1948. When the Jordanians captured the area, the Jews were evacuated and for nineteen years were barred from visiting either their former homes or the cave of Shimon HaTzadik.

After Jordan illegally occupied and then annexed the eastern part of Jerusalem in 1948, the Jordanian authorities granted 28 Palestinian refugee families the right to live in the homes from which the Jewish owners had been forcibly evicted in 1948. But, as The New York Times has previously reported, the residents lost their rights to continue living there as they have failed to pay their rent:

In the 1950s, Jordan and the United Nations agency for Palestinian refugees gave 28 refugee families homes there. The families say that Jordan promised them full ownership, but the houses were never formally registered in their names.

In the early 1970s, the Israeli courts awarded two Jewish associations ownership of the compound based on land deeds that were a century old. The Palestinian residents were allowed to stay on as protected tenants on the condition that they paid rent to the Jewish groups.

Rejecting the court ruling, many of the Palestinian families refused to pay rent, making them eligible for eviction.

Mohyeldin is able to push a false story of “Israeli settlers” dispossessing a Palestinian family from their home by ignoring the fact that the family forfeited their rights  to live as “protected tenants” in the Jewish-owned property by flatly refusing to pay rent that they owed. And based on this deception, El-Kurd is able to advance his sensationalist, factually-bereft agenda:

In a separate factual error, Moyheldin grossly mischaracterizes the agenda of the anti-Israel BDS movement, whitewashing: “another headline today was the U.S. Secretary of State saying that the movement of boycott, divest, sanctions to try to end the occupation in the West Bank is antisemitic.”

But as leaders of the movement themselves have made clear, BDS’s goals are not limited to ending Israel’s presence in the West Bank.  To quote BDS co-founder Omar Barghouti’s rhetorical question-and-answer to himself, “If the occupation ends, let’s say, would that end your call for BDS? No it wouldn’t.” (The video was uploaded to Youtube on Feb. 24, 2010 but subsequently removed.)