Mahmoud Abbas and his longtime chief negotiator Saeb Erekat never dithered in expressing their views on the Jewish state. Again and again, they rejected the idea of Israel as it is, loudly announcing that they don’t accept a Jewish state within any boundaries. 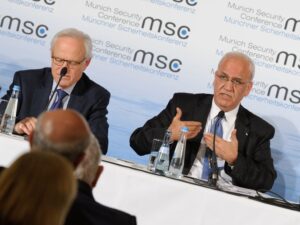 An NBC news opinion piece by Martin Indyk, though, would have readers think otherwise. According to Indyk, “Erekat had become the embodiment of the Palestinian commitment to a stage-by-stage process in which an independent Palestinian state would emerge to live in peace alongside the Jewish state of Israel,” an approach Indyk insists was authored by Abbas.

The passage nearly requires a map to get through — Erekat was the embodiment of a commitment to a process meant to hatch something — but it clearly ends at a Jewish state. The process, we’re told, is designed to produce two states for two peoples, the Jewish people and the Palestinian people, living side by side in peace. Many would support that goal. Not Erekat and Abbas.

“We are not going to recognize Israel as a Jewish state,” Erekat said in 2014. Abbas couldn’t agree more. “I’ve said it before, and I’ll say it again,” he said in 2011 (and indeed, before and since). “I will never recognize the Jewishness of the state, or a ‘Jewish state.'”

In 2014, Abbas reiterated, “The Palestinians won’t recognize the Jewishness of the State of Israel and won’t accept it.” In 2015: “We won’t accept a Jewish state.” In 2016: “The Palestinian leadership categorically rejects the idea of a Jewish Israel.” (Although emphatically opposed to Israel’s Jewish nature, Abbas raised no objections after an official Palestinian committee drafted a constitution that left no doubt about the envisioned Arab nature of a future state of Palestine.)

Indyk, in response to criticism of his NBC language, insisted he “never said Saeb [Erekat] accepted recognizing Israel as a Jewish state.”

Really? At risk of repetition, but for the sake of testing Indyk’s plea of innocence, here again is what he wrote in its original context:

…  the sad fact is that both sides are so disillusioned with the failed efforts by successive administrations to end the Israeli-Palestinian conflict that resolving it will take time and patience.

This was underscored by the death last week of Saeb Erekat, the Palestine Liberation Organization’s chief peace negotiator. His passing, more than the ill-conceived political stunt of an outgoing secretary of state, marks the end of the Oslo era. Erekat had become the embodiment of the Palestinian commitment to a stage-by-stage process in which an independent Palestinian state would emerge to live in peace alongside the Jewish state of Israel.

It is unclear what parsing Indyk might do to distinguish what he wrote from what he later claimed not to have said. But a reasonable reader, when told that Erekat was committed to a process that would lead to peace between a Palestinian state and a Jewish state, would be justified in understanding that he was committed to a Palestinian state and a Jewish state living side-by-side in peace.

And what of NBC News? Does it believe its readers should be burdened with having to hunt for unseen vagueness in language that, if discovered, might signal that a sentence doesn’t mean what it seems to mean? Apparently so. Editors refused to correct or clarify Indyk’s language.