Diana Buttu, a Palestinian spokeswoman frequently interviewed in the Western media, is a shameless practitioner of the “big lie” technique in vilifying Israel, and she is highly skilled at repeating her fabrications with a perfectly straight face. (See Countering Propaganda: Focus on Diana Buttu) Buttu routinely presents her outlandish charges and claims as self-evident truths, all the while accusing Israel of lying.

Her latest big lie is that Palestinian rockets fired at Israeli civilians don’t have explosive warheads. The implication, perhaps, is that they mean no harm to the civilians on the receiving end. Buttu offers no explanation of why Palestinians would risk their lives to fire dummy rockets at Israel.

Here she is on three separate occasions fostering this deceit.

Of course, contrary to Buttu, current news reports note that Qassam rockets carry "a small warhead of about 22 pounds of explosives" (AP, 1/1/09, Hamza Hendawi, "Rockets are again at the heart of a Mideast war"). And the more sophisticated Grad rockets carry warheads of roughly 40 pounds.

But it's not just numbers that rebut Buttu's outrageous falsehoods. There are also pictures of the damage caused by these rockets. The following are wire service photos taken of damage from Qassam rockets. The first is from Ashkelon: 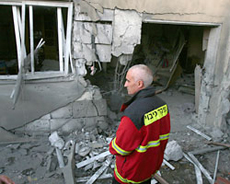 while these two are from Sderot:

Better yet, there are also videos that capture the moment of impact of these supposedly "non-explosive" rockets – the first is surveillance video of a Qassam exploding near a gas station in Sderot on May 18, 2007, while the second shows a Grad missile exploding in Beersheva on Jan. 7, 2009:

While Fox News' Greg Jarrett admirably challenged Buttu on air about her lies, the question remains: Why would any member of the media believe anything she says? To interview Buttu without challenging every word is to act as her accomplice.