Did Israel accuse Iran of environmental terrorism, charging its enemy with the deliberate dumping of 1000 tons of oil to pollute Israel’s coast, as some international news reports claimed?

Israel accused Iran on Wednesday of being linked to a recent oil spill off its shores that caused major ecological damage, calling the incident environmental terrorism.

With headlines like that, readers would reasonably assume that Israel’s prime minister, along with the defense and intelligence establishments, or perhaps the foreign ministry, have leveled the grave accusation. 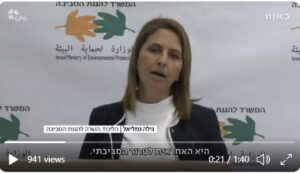 Yet, not a single one of those leading Israeli authorities suggested that Iran deliberately polluted Israel’s shores. Israeli environment minister Gila Gamliel was the only Israeli official to accuse Iran of environmental terrorism. Not one security or intelligence authority backed the junior minister.

The minister’s accusation was disputed by senior security officials, however, with Channel 13 news reporting that Israel’s defense establishment “does not share this assessment.” The network said it was “striking” that neither the Mossad intelligence agency nor other defense bodies were involved in formulating Gamliel’s conclusion.

An unnamed senior security official told the Kan public broadcaster that Iran does not appear to be directly involved.

The director-general of Gamliel’s ministry also appeared to cast some doubt on her claim the leak was intentional.

“We think the leak that affected us was not during the transfer of oil from Emerald to smaller ships but either a deliberate leak — that is to say terror — or an accident,” Rani Amir said at the press conference.

The Israeli military and intelligence agencies weren’t aware of the minister’s claims before she presented them in a press briefing, which officials said caught them by surprise. Israeli intelligence and navy weren’t involved in the investigation, and the Environmental Protection Ministry didn’t reach out to them for help.

Likewise, despite the inaccurate headline that “Israel accuses Iran of ‘environmental terrorism’ after oil spill,” the accompanying AFP article, to its credit, noted: “Israeli public broadcaster Kan, citing anonymous sources, said the intelligence community did not share the minister’s assessment.”
AP also reported Gamliel’s accusations on March 3, but noted: “Israel’s military and defense and foreign ministries could not confirm the claim” (“Israel suspects Iran connection to Mediterranean oil spill“). The next day, the AP followed up with an additional story sharpening the point that the environmental terrorism charge was Gamliel’s alone, not Israel’s. The March 4 article, “Israeli minister sticks to Iran ‘environmental terrorism’ claim,” stated:

Israel’s environmental protection minister on Thursday stood by her allegation that a crude oil spill in the eastern Mediterranean last month was an intentional attack by Iran but provided no evidence for her claim.

Defense officials remained silent about the charge by Gila Gamliel, a junior minister in Prime Minister Benjamin Netanyahu’s Likud party, who on Wednesday announced that she had concluded the Iranian government deliberately spilled tons of crude oil into the sea in an attempt to damage Israel’s marine ecosystem.

Asked in an interview on Army Radio on Thursday whether she could prove the spill was an intentional attack, Gamliel doubled down. “To say that this isn’t terrorism, that it was an accident, is an inappropriate approach to the incident,” she said.

Unlike AP, AFP, Haaretz and Times of Israel, Reuters did not give any indication whatsoever that Gamliel received zero backing for her assertion from the relevant Israel bodies. The fact that relevant Israeli security and intelligence sources declined to confirm her assessment, and even reportedly contradict her on this point, is a key part of the story.

Moreover, the fact that Gamliel stands alone in her assertion belies the claim that “Israel” accuses Iran of environmental terrorism.
Donate Now