Agence France Presse’s coverage of three Gaza fisherman killed Sunday when their boat exploded strikingly omits multiple indications originating from the Palestinian side that a misfired Hamas rocket was responsible for the fatalities (“Explosion kills 3 fishermen from Gaza,” March 7).
AFP reports only that the cause of the explosion which killed the fishermen is unknown, and that Israel denied involvement. The news agency reported:

Three Palestinian fishermen were killed Sunday when their boat exploded off Gaza’s coast in the Mediterranean Sea, the fishermen’s union said, with the cause of the blast unknown.

Israel’s army said it was “not responsible for the incident”.

“According to our information, the cause of the explosion came from the Gaza Strip,” the army said on Twitter. …

[Nizar] Ayyash [of the fishermen’s union] said the deaths were caused by “shells of unknown origin (striking) their boat”.

AFP’s detailed photo captions about the funeral for the fishermen likewise note “shells of unknown origin” and Israel’s denial of responsibility, and omit the critical information that an errant Palestinian rocket is suspected. An example of the captions follows: 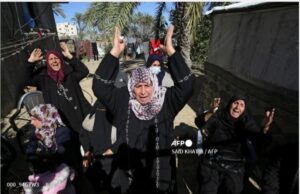 Relatives of the three Palestinian fishermen, who were killed when their boat exploded off Gaza’s coast in the Mediterranean Sea, mourn during their funeral in Khan Yunis in the southern Gaza Strip, on March 7, 2021. “According to our information, the cause of the explosion came from the Gaza Strip,” the army said on Twitter. Nizar Ayyash, head of Gaza’s fishermen union, confirmed the deaths 15 nautical miles (28 kilometres) off the coast of Khan Yunis in southern Gaza. Ayyash said the deaths were caused by “shells of unknown origin (striking) their boat”. Israel’s army said it was “not responsible for the incident”. SAID KHATIB / AFP

Three Palestinian fishermen were killed Sunday after a blast ripped through their boat off the Gaza shore, officials said, in what appeared to be an explosion caused by a misfired rocket launched by the ruling Hamas militant group. . . .

The cause of the blast wasn’t immediately clear, but there were growing indications that it was the result of a misfired rocket. Hamas, which has fought three wars with Israel, is believed to possess thousands of rockets.

Minutes before the explosion, local media reported that Hamas was test-firing rockets toward the sea.

Hamas, which is usually quick to cast blame on Israel, instead said it was launching an investigation. And relatives of the fishermen posted a statement on Facebook describing them as “the martyrs of living who were killed when a local mortar shell hit their boat.” (Emphases added.)

Three Palestinian fishermen were killed on Sunday when their boat exploded off the Gaza Strip, a blast that a human rights group said was likely caused by errant Palestinian rocket fire.

The Palestinian Center for Human Rights said the boat was two miles offshore when the shell hit and “completely destroyed it”.

Given that AFP’s story was published approximately an hour and a half prior to AP’s, it’s possible that less information was available at the time. Nevertheless, as more information emerged, AFP certainly was free to update the story to make clear that a Palestinian organization pointed to an errant Palestinian rocket as the cause of the fatal incident, that local media reported minutes prior to the incident that Hamas was test-firing rockets towards the sea, and that Hamas did not blame Israel for the deaths.

As of this writing, AFP’s coverage carries no indication that Palestinian sources believe a Palestinian rocket was at fault.
For the French version of this article, see InfoEquitable.
Donate Now