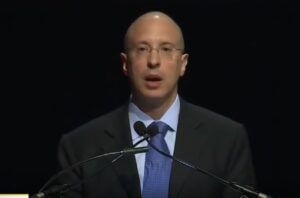 Elisha Wiesel, son of Auschwitz survivor and Nobel Laureate Elie Wiesel, will be speaking at a memorial lecture offered in his father’s name at Boston University on Monday Nov. 8, 2021. (Details here.)

Elisha not only condemned the comments but also engaged Rev. Barber further on the topic. Professor Zank refused to address the anti-Israel comments offered by Barber and instead argued that some of Barber’s best friends are Jews, declaring, “He counts many prominent Jews among his friends and allies, and he regularly speaks in Jewish venues.”

It appears that Elisha Wiesel is prepared to speak some uncomfortable truths about the controversy, judging from a speech he gave at the National Cathedral earlier this year. During a speech Elisha gave three weeks ago at the National Cathedral, Elisha Wiesel demanded that Christian faith leaders confront anti-Zionism.  During his talk, Elisha stated:

Today my father is being honored as a friend of the church. But as a child, he would cross the street to avoid one, and the beatings from the worshipers within; on Christmas Eve he knew to stay off the streets altogether. My great-grandmother sang him mournful songs about Jewish communities decimated over outrageous lies that they murdered Christian children to make matzoh with their blood.

How do I help our Christian friends understand that the Jewish people still face blood libels today?

Accusers throw the word “apartheid” at Israel, ignoring that thousands of Arabs serve voluntarily in the Israel Defense Forces and take their oath on a Koran or New Testament, ignoring that this year an Arab political party was kingmaker in forming the Israeli government.

Some celebrities charge Israel with ethnic cleansing, disregarding that as of 2017, the population of Palestinian citizens in Israel is more than nine times as high as it was in 1948. Meanwhile, almost all states in the Arab Middle East are Judenrein — “cleansed” of Jews.

American right-wing extremists shoot us with assault rifles in synagogues while reactionary preachers express fury at our support for immigrants and people of color. For our allyship, they see us as poisoning the wells of White America. At the same time, elements of the Christian left condemn Israel in vitriolic terms, without a trace of compassion for the Israeli people facing violence and terrorism. The United Church of Christ’s denunciation didn’t even mention Hamas.

What makes the event even more dramatic is that this will be the first in-person lecture at the Elie Wiesel Jewish Studies Center post-Covid. It will also be shown online.