“Mina Al-Oraibi, the Editor in Chief of the UAE’s The National newspaper [owned by UAE’s rulers], and Fareed weigh in on what the future holds for Israeli-Arab relations.” This is CNN’s description of a Sept. 20, 2020 segment discussing the recent Abraham Accords. 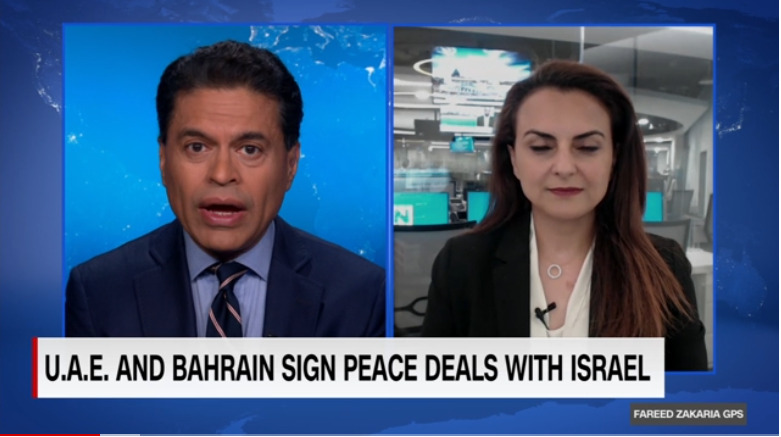 In this broadcast, Zakaria, true-to-form, implies that conflicts between Israel and Arabs or Muslims are typically caused by the Jewish state.

A recent example of Zakaria’s bias is a June 2020 broadcast, in which he falsely characterized former Israeli Prime Minister Ehud Olmert’s position as proof that Israel today does not want peace with the Palestinians (more below).

And here he criticized UAE and Bahrain. He said:

The UAE and Bahrain sold out the Palestinians … wasn’t this meant to be about providing the millions of Palestinians who live in the occupied territories with some kind of political rights, with a state?

Absolutely; the Palestinians deserve to have their own state and it’s an issue that globally is recognized. International law says that the [Jewish] settlements in occupied territories are illegal. Nothing that the UAE and Bahrain, for that matter, did, changes that.

Bibi Netanyahu seems to have out played the UAE. He threatens something which he never did and got returns for not doing something that he never did. He got a major concession from the UAE. That doesn’t reflect well on the UAE’s leadership.

The UAE’s Oraibi disagreed about the host’s claim regarding UAE:

Well, not really because he didn’t do it because there were back channel talks happening. The UAE Ambassador to the U.S. Yousuf Latib publicly came out in June and said that any steps towards normalization would be halted if annexation went ahead.

the UAE has provided the prize without Israel recognizing a Palestinian state.

The annexation was a real threat. That for the time being is off the table.

Indeed, Zakaria’s thinking has been repudiated—whether he realizes it or not.

The opening remark of a recent CAMERA analysis of mainstream media is applicable here: “The more Israel and Gulf states advance in the historic process of normalization, the more the … struggles to shoehorn the expanding ties into the narrow prism of old dogmas about Israeli-Palestinian relations.”

False and misleading assertions and a key omission

• Zakaria’s use of the term “occupied territories” requires context. Pending the conclusion of a negotiated agreement on the territories’ final status, by international law Israel remains both the legal and obligatory military occupational authority in the West Bank (Judea and Samaria), which it had seized as a result of her successful self-defense in the 1967 and 1973 wars. Israel actually relinquished portions of the West Bank, notably Hebron, as part of the Oslo 1990s peace process—only to be met with violence. The resumption of organized Palestinian violence against Israelis during the Second Intifada (2000-05), Israeli troops re-established a limited presence in the West Bank, the majority of which remains ruled by the Palestinian Authority (PA).

• The implication that Israel prevents the West Bank Palestinians from having “political rights” is false. The PA has jurisdiction over the daily lives of almost all West Bank Arabs, with Israeli personnel only entering Palestinian communities to pursue terrorists.

• The guest’s claim that “settlements in occupied territories are illegal,” is also false. The existence of Jewish communities in the area is enshrined in international law. The League of Nations Palestine Mandate, Article 6 calls for “close Jewish settlement” on the land west of the Jordan River. Article 6 is incorporated into the U.N. Charter. Further, the United States itself endorsed the Palestine Mandate in the 1924 Anglo-American Convention. The West Bank is not sovereign territory of any country, but rather land disputed by both Israel and the PA. It was illegally occupied by Jordan from 1948 to 1967, at which point Israel took control of it during the 1967 Six-Day War.

• The use of the term “annexation” in reference to the West Bank is also misleading. The term itself has been used as shorthand to refer to the application of Israeli law to the communities of over 500,000 Jews living in the West Bank, the entirety of which was part of ancient Israel. Importantly, these communities are on land that comprises only a tiny percentage of the total land mass of the West Bank. Moreover, in international law, “Annexation means the forcible acquisition of territory by one State at the expense of another State.” But the West Bank is not territory of a sovereign country as no sovereign Palestinian Arab state has ever existed. Thus, it is incorrect to claim that the disputed West Bank, and, in particular, areas in which Israeli settlements are located, are Palestinian territory.

• Zakaria unsurprisingly omits any mention of the numerous Palestinian failures  that are the reasons why there is no peace agreement. Palestinian Arab leaders have rejected several offers for statehood, notably in 2000 at Camp David, 2001 at Taba and 2008 after the Annapolis Conference, as well as proposals to restart negotiations. The PA has also refused to quit paying terrorists, refused to engage in bilateral negotiations and refused to officially recognize Israel as a Jewish state—actions which violate the Oslo Accords that created the Authority in the first place.

In the June 21 broadcast, Zakaria, in effect, declared that Israel does not want peace. In his introductory remarks at the beginning of the broadcast prior to presenting the clip of his conversation with Ehud Olmert, Zakaria said:

Israel’s Prime Minister Bibi Netanyahu said if he was put back in office, he would annex parts of the West Bank. That dramatic act could happen just days from now. I will talk to Netanyahu’s predecessor, Prime Minister Ehud Olmert, who said it is proof that Israel today does not want peace with the Palestinians.

But this claim as to what Olmert said is contradicted by Olmert‘s verbiage  typifying what he actually said in the conversation:

The attempt to annex the parts of the territories on a unilateral basis is an effort to bypass the need for direct negotiations between us [Israel] and the Palestinians, something which I think will shatter the foundation of stability in the Middle East, and I’m very much concerned about it.

Clearly, this fell far short of Zakaria’s claim that Olmert said that annexing parts of the West Bank is proof that Israel today does not want peace with the Palestinians.

Zakaria opens every broadcast in the same manner: “This is GPS, the Global Public Square. Welcome to all of you in the United States and around the world. I’m Fareed Zakaria coming to you live from New York.”

And his personal Website adds to this: “Fareed Zakaria hosts Fareed Zakaria GPS for CNN Worldwide and is a columnist for The Washington Post, a contributing editor for The Atlantic, and a bestselling author. Fareed Zakaria GPS is a weekly international and domestic affairs program that airs on CNN/U.S. and around the world on CNN International. Since its debut in 2008, it has become a prominent television forum for global newsmakers and thoughtful leaders.”

A glance at some of  Zakaria’s Washington Post pieces about Israel indicates his attitude toward the Jewish state and U.S. support:

The headlines speak for themselves. But Zakaria, it seems, has a habit of speaking for others.

His Israel-related biased broadcasts will continue to be monitored and exposed by CAMERA.

Subsequent Zakaria bias occurs in his monologue at the end of the Oct. 18 broadcast:

“Israeli prime minister Benjamin Netanyahu finds himself in a new political pickle since the signing of those Abraham Accords. After all, over the past eight months he halted the promise of annexation of the West Bank.”