On Wednesday, Nov. 5, Ibrahim al-Akri, a Hamas operative and resident of Jerusalem’s Shuafat neighborhood, ploughed his car onto pedestrians along the light rail platform, killing an Israeli border policeman and injuring 14 other people, several of them seriously.  This was the third terror attack in Jerusalem in two weeks, all carried out by Arab terrorists from Jerusalem. They resulted in the deaths of three Israelis, the critical wounding of another, and serious injuries to many more.

Hamas claimed responsibility for the most recent attack in a statement extolling “Jerusalem’s blessed heroes” who carried out the attacks.  Al Akri’s attack involved ramming his car into a crowd of pedestrians at one station,  ploughing along the light rail route to crash into other pedestrians, and, when his car could no longer move, exiting the car to attack yet more passersby with a metal crowbar, before being shot and killed by police.  A Hamas spokesman called him a “martyr,” celebrated his attack as “a heroic operation” and called on all Palestinians to carry out more such terror attacks in the name of defending Palestinian holy sites on the Temple Mount. According to Hamas:

This was a result of the crimes of the Zionists who continue to attack the worshipers and to violate the Palestinians’ holy sites  We call on the people of Jerusalem and the West Bank and all of the Palestinians to carry out more of these activities with full force in order to defend al-Aksa,

Arguably for the first time, Hamas was taking a page from Palestinian Authority President Abbas and his Fatah movement’s playbook on terror.  For nearly two weeks, Abbas and Fatah had been raising the anti-Jewish battle cry “Defend Muslim Holy Site” successfully. Their success was measured in the number of terror attacks, the number of dead and injured Israeli Jews and the number of Jerusalem’s Arab residents who, with inflamed passions, were willing to risk their lives in order to kill Israeli Jews and sow havoc in Jerusalem.

Several days before a Palestinian Islamic Jihad member from Jerusalem tried to murder Temple Mount advocate Yehudah Glick, Palestinian President Mahmoud Abbas spoke at a conference in Ramallah and called upon Palestinians to defend the Temple Mount (al Aqsa compound) from the Jews “using all means.” Palestinians, he said, must be united “to protect Jerusalem” and the Muslim sanctuaries.

The following day, he reiterated his call to defend Muslim holy places from the Jews, whom he deceivingly denigrated as “settlers” and dehumanized as “cattle herds.” Abbas falsely accused Jews of trying to enter and desecrate the mosques on the Temple Mount. His mendacious call was evocative of many such calls to violent jihad used repeatedly by Arab leaders, beginning in 1929 when  Grand Mufti of Jerusalem Haj Amin Al Husseini fomented attacks and massacres with his battle cry to “defend Islam’s holy places” from the Jews.

The day prior to Yehudah Glick’s scheduled talk at the Begin Heritage Center as part of a conference advocating Jewish prayer and civil rights on the Temple Mount, former PA Prime Minister and current chief of Jerusalem Affairs Ahmed Qurei further inflamed Palestinian emotions with a press release accusing Israeli Jews of planning “a large scale invasion” of the Al Aqsa mosque. WAFA, the official PA news agency, discussed Qurei’s exhortations the next morning, just hours before the murder attempt on Yehudah Glick. According to Palestinian Media Watch’s translation, Qurei railed against

the preparation of extremist biblical plans encouraging settlers and extremist Jews to carry out large-scale invasions of the Al-Aqsa Mosque and calling on the entire Jewish nation to invade the Mosque on the occasion of the so-called ‘anniversary of the pilgrimage of Maimonides’, one of the greatest extremist Jewish rabbis who called for the destruction of the Al-Aqsa Mosque and the construction of the alleged Temple in its place.

The Palestinian leader alleged that Jerusalem and the Al-Aqsa Mosque, “were undergoing one of the most dangerous periods since the beginning of the Israeli occupation” and that “immediate intervention” was called for to protect Jerusalem and “rescue it from the threat of Judaization…”

Muataz Hijazi, a member of Islamic Jihad and a resident of the mixed Arab-Jewish Jerusalem neighborhood of Abu Tor, had spent more than a decade in an Israeli prison for his involvement in terrorist activities. Upon his release from prison in 2012, he told the Ramallah-based Al-Quds News outlet that he hoped to be “a thorn in the side of the Zionist project of Judaizing Jerusalem.” Employed at a restaurant at the Begin Centre, the venue of the Temple Mount conference, and equipped with a gun and motorcycle that enabled a quick flight to his nearby home, Hijazi was not only motivated, but was perfectly placed to heed the incitement by the PA leaders. His attempt to murder resulted in critical injury for Glick, while Hijazi was killed in a shootout with Israeli security forces who came to arrest him.

The incitement by Abbas and his Fatah movement, however, did not end there. Both Fatah and Islamic Jihad claimed Hijazi as a member and took credit for his attempt to kill Glick.

Fatah glorified Hijazi as a martyr on its Facebook page. A photo of the smiling terrorist next to one of the Dome of the Rock on the Temple Mount appeared over the text: 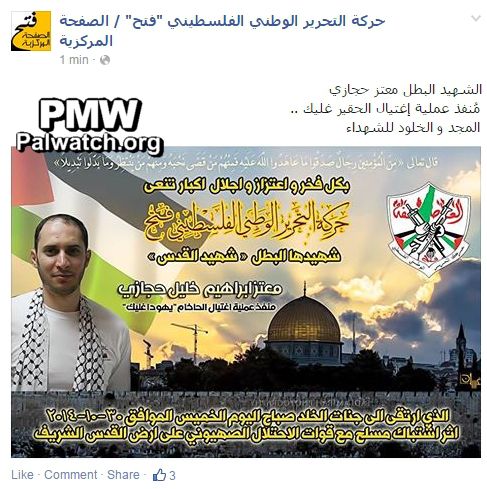 President Abbas too praised Hijazi’s actions in a condolence letter sent to the family. The letter, posted Israeli journalist Gal Becker on his twitter feed, labeled the would-be murderer’s death a “vicious assassination crime committed by the terrorists of the Israeli occupation army” and declared that the would-be murderer, Hijazi, would “go to heaven as a martyr defending the rights of our people and its holy places.” 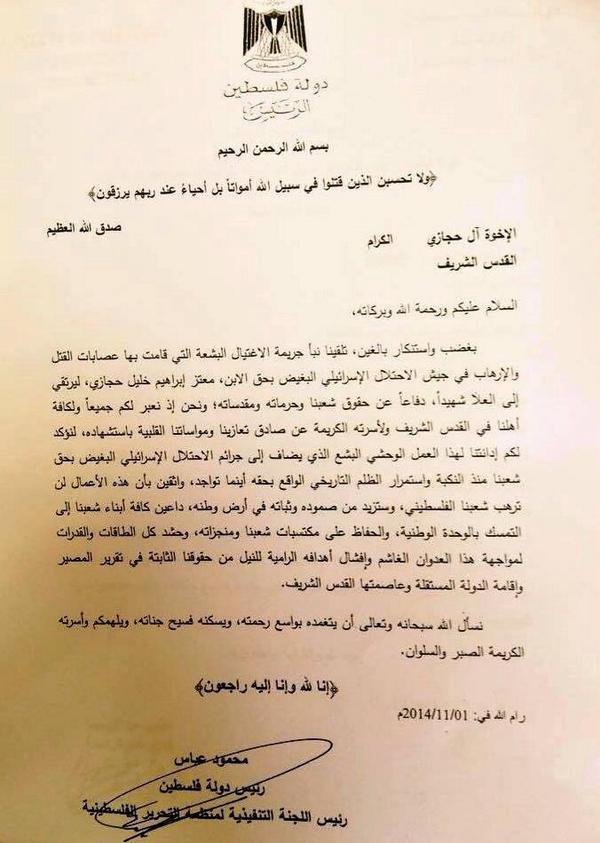 When Israeli security forces temporarily barred both Jews and Muslims from entering the Temple Mount in order to prevent an escalation of violence following the attempt on
Glick’s life, President Abbas proclaimed this a “declaration of war.” His Fatah party issued a call to arms. According to Palestinian Media Watch, WAFA publicized Fatah’s call:

In an announcement that was published by the Fatah Mobilization and Organization Commission today, the movement called to set tomorrow as a day of rage throughout the homeland and in countries which are home to refugees, to express the Palestinian people’s opposition to any attack on the holy places and foremost among them the Al-Aqsa Mosque… And to consider desecration of Al-Aqsa as a declaration of a religious war against the Palestinian people and the Arab Islamic nations.

Cartoons in the official Palestinian Authority newspaper, Al Hayat al Jadida, continued to urge Palestinians to attack Jews on the Temple Mount.  One depicted a masked fighter aiming a slingshot and donating blood to the Dome of the Rock. 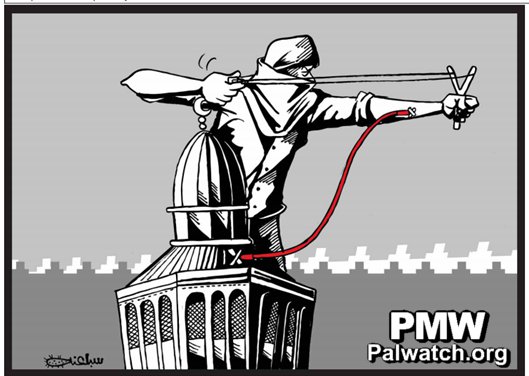 The second depicted a father in front of the Dome of the Rock informing his son that “purification before prayer is performed with stones” (translation Palestinian Media Watch). 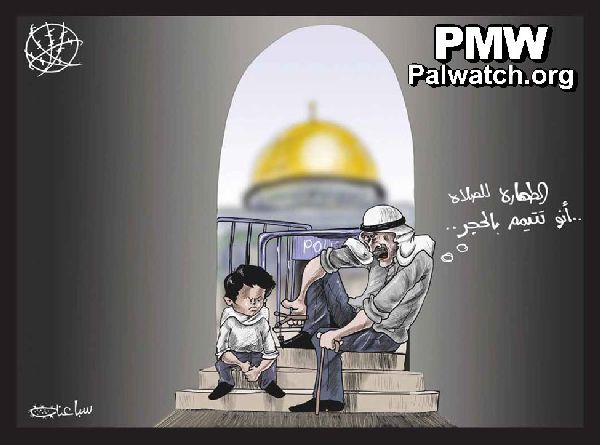 Another  cartoon  following the Hamas attack on pedestrians, 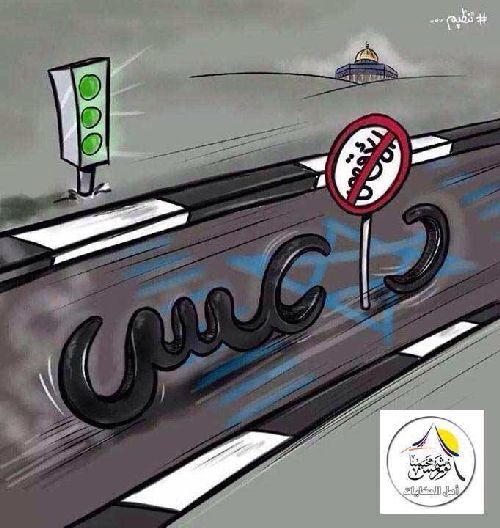 Palestinian Media Watch translates the caption at the top right corner of the photo:

The entrance prohibited traffic sign says “Al-Aqsa/”  The watchdog group also notes other posts that encourage Palestinians to run over the “foreign settler” and to rage about Jews desecrating the Al Aqsa Mosque.

Abbas, Fatah and Hamas continue to fan the flames and encourage violence.