Reuters, which touts itself as being “the world’s leading provider of news photography for today’s global media universe” has long been faulted by CAMERA for its photographic bias, misrepresenting photographs of the Arab-Israeli conflict to support the theme of Israeli aggressors victimizing innocent Arabs and their supporters. (See, for example, “Reuters Photos the Picture of Bias“, “Dissembling Demolitions“)

In 2006, during the Israel-Lebanon war, Reuters photographers took it a step further with photographers actually altering photos to support the image of a cruel Israeli aggressor against innocent Arab civilians. (See “A Reprise: Media Photo Manipulation“) At that time, Reuters was forced to withdraw over 900 of its pictures after blogger Charles Johnson of Little Green Footballs demonstrated how the news agency’s photographer had doctored images taken of the Israeli/Hezbollah war. And a new term was coined for the media’s manipulation of photographs – “fauxtography.”

And now, again, Charles Johnson has raised the red flag about new examples of Reuters fauxtography.

In the first photograph, a knife held in the hand of a passenger on the Turkish ship, the Mavi Marmari, was deleted from the version Reuters released. The image in its entirety was first published in the Turkish paper Hurriyet presumably to demonstrate to a domestic audience how their people had victimnized Israeli soldiers. 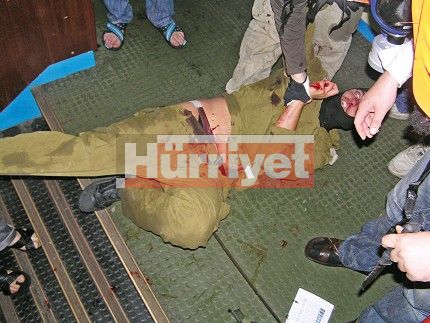 Reuters, however, cropped the photo, eliminating evidence of the knife: 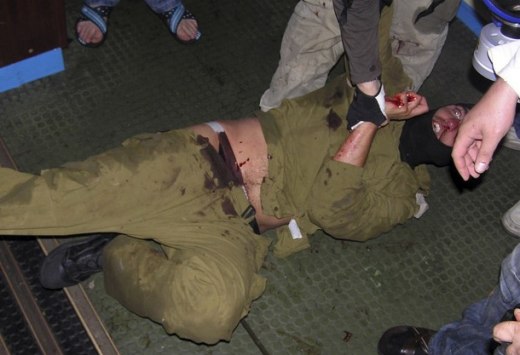 CAMERA contacted a Reuters editor about the cropped photograph, after which Reuters posted the full, uncropped image on its site, “Reuters Pictures”, from which clients purchase images.

The photographs were originally “handouts” — images from the IHH, a radical Islamic group whose members attacked soldiers on the Mavi Marmara. Reuters’ representatives insisted that preparation of the photos for distribution followed “normal editorial practice.” According to Reuters, the handouts “were prepared for dissemination which included cropping at the edges. When [they] realized that a dagger was inadvertently cropped from the images, Reuters immediately moved the original set as well.”

But, unfortunately for Reuters, Johnson had exposed a second photograph too, another IHH handout.  IHH displayed this on its website presumably to flex its muscle and demonstrate its supposed might over its Israeli enemy: 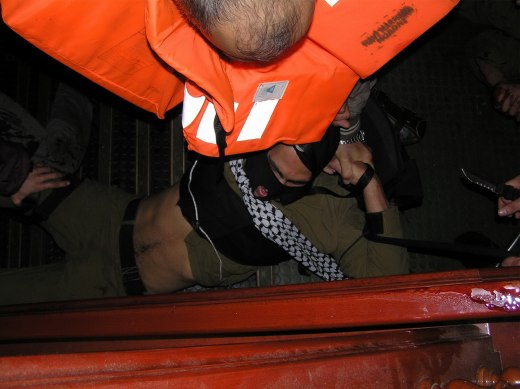 Johnson magnified and lightened the IHH photo (see below) to reveal the knife, the pool of blood and another soldier lying on the ground.

For the sanitized version released by Reuters, editors cleaned up the pool of blood, and eliminated the knife held by the passenger as well as  the second Israeli soldier lying on the ground. 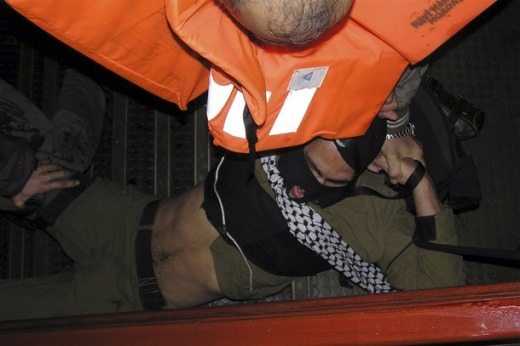 Someone at Reuters apparently realizes the bloody version of these pictures, which may boost support for the militant Islamist group among fellow Islamists, might have an entirely different impact on Western audiences. The photographs support Israel’s version of events that emphasizes soldiers shot in self-defense to protect themselves from a violent mob. The opposing account claiming a group of  non-violent “peace activists” were cut down by Israeli fire is evidently more in line with the version Reuters has typically preferred.

Reuters photo archive (pictures.Reuters.com) now includes both the earlier cropped version of the photos, as well as the original, uncropped version.   Reuters representatives continue  to justify the cropped pictures by insisting that cropping the edges of a photo is normal editing procedure for photographs.  Perhaps so, but the fact that the cropping was carefully limited to the specific evidence of  the “peace” activists’ weapons has prompted the Israeli government press office to weigh in on the matter with a letter to Reuters CEO Tom Glocer demanding a clarification of the apparent photo abuse  by Reuters.