In June of this year, at a West Bank checkpoint near the Abu Dis suburb of Jerusalem, a car approaching the checkpoint accelerated, suddenly made a sharp turn, and rammed into a female police officer, sending her flying through the air. When the driver of the car exited the vehicle, he was shot by other officers. He died of the gunshot a few minutes later.

The man’s uncle told the press, “My cousin, the nephew of my wife, was executed, murdered in cold blood and Netanyahu bears responsibility.”

The uncle was Saeb Erekat, Secretary General of the PLO Executive Committee, and it wasn’t his first slander against Israel. As detailed recently by Palestinian Media Watch, he supports terror against Israeli civilians, including not only his nephew’s heinous act but also the pay-to-slay system under which the Palestinian Authority pays money to those held in Israeli jails on convictions for acts of terrorism or to families of those who have died while committing terror attacks. He opposes normalization with Israel, and has even made the completely bogus claim that Jesus was a Palestinian. In January of this year, according to a translation by PMW, Erekat said,

The Palestinian people’s struggle is meant to achieve freedom, independence, and the end of the occupation, settlement, collective punishments, and war crimes, and it is forbidden for anyone and any party that relies on international law and the international bodies to describe this struggle as terror. [Emphasis by PMW.] 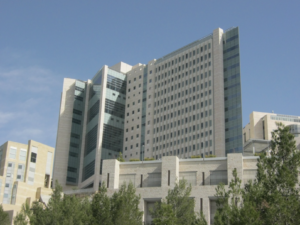 So when he was recently admitted to a world-class, cutting-edge medical facility in Israel, Hadassah Hospital, for treatment for Covid-19, most people might have thought that Israel’s magnanimity was newsworthy.

But not the Washington Post. What was newsworthy to the Post and its Jerusalem bureau chief Steve Hendrix was that some individual Israelis had the temerity to oppose treating, in their own hospitals, a man who supports providing financial incentives to kill them and their children. The Post’s October 22 headline was “‘The enemy’ in the covid ward: Some Israelis oppose treating a Palestinian leader.” The first paragraph of the article read:

Saeb Erekat, a high-ranking Palestinian leader who became critically ill with covid-19 over the weekend, had been in an Israeli hospital only a few hours before a small crowd formed outside that didn’t want him there.

The photo at the top of the page is of protestors, and the caption reads, “Israelis protest the hospitalization of longtime chief Palestinian negotiator Saeb Erekat at the Hadassah University Hospital Ein Kerem in Jerusalem on Oct. 19, 2020.”

Later in the article, it is explained that for others in Israel, “offering aid to the sick and injured was well in keeping with Israeli values and with its tradition of offering humanitarian aid around the world.” It’s clear, though, what the Washington Post reporters and editors find most newsworthy – the emphasis in the story is on the opposition to his treatment.

Erekat is referred to as “a high-ranking Palestinian leader,” and as “the Palestinian’ longtime chief diplomatic negotiator.” We are told that “former diplomats … say Erekat has been a fierce opponent but one who has consistently condemned violence,” and that he is “a determined proponent of an independent Palestinian state.”

But readers are not told of Erekat’s support for the pay-for-slay program that puts a bounty on the head of every civilian in Israel, Jewish and non-Jewish alike, including American tourists and students like Afghan and Iraq war veteran Taylor Force. Or his recent support of his own nephew’s terror attack. While we are told that some protestors were “related to victims of past terrorist attacks,” the Post fails to explain how Erekat is connected to terrorism.

To the Post, instead of a story about Israeli generosity, it’s just another opportunity to portray Israeli society as malevolent and Palestinians as hapless victims.