In her 2008 book Occupied With Non-Violence: A Palestinian Woman Speaks, pro-Palestinian activist Jean Zaru speaks of the difficulty that she faces when introducing herself to Christians from the West. They often mistakenly assume that she is either a Muslim or a Jew because she lives in Jerusalem. When she tells these Christians that she is in fact a Christian, they often ask when she converted to her newfound faith.

Her answer, she writes, is that “I am a Christian, because my ancestors were disciples of Christ. Arabs were the first Christians. They formed the earliest Christian community in Jerusalem.”

The first Christians were not Arabs, but were Jews who had followed Jesus during his ministry and kept his memory alive after his crucifixion, resurrection, and ascension. Moreover, Arabs did not form, as Zaru writes, “the earliest Christian community in Jerusalem.”

That designation, belongs — again — to Jews. Arabs who embraced Christianity are in fact mentioned in the book of Acts, but the fact remains that Jesus’s earliest followers and the first Christian community in Jerusalem were Jews.

This is patently evident in the Book of Acts. The first five chapters describe the early episodes of the church in Jerusalem, with one of the biggest events, Jesus’s ascension, taking place on a Jewish holiday — Pentecost.

And Acts 15 recounts Peter’s leadership at a council in Jerusalem which determined that non-Jews did not need to be circumcised as Jews did to become members of the church. This was a debate between people who were born and raised as Jews, not Arabs. The Jewish roots of the Christian faith are unmistakable and undeniable.

Zaru’s shameless attempt to write Jews out of the history of the early church and supplant them with her Arab ancestors got past the editors at Fortress Press without challenge, probably through a combination of ignorance and ideological sympathy with the Palestinian cause and animus toward the presence of sovereign Jews in the Holy Land.

So what actually happened? The details, laid out in a previous CAMERA article, are as follows:

In 132 (Common Era or AD), approximately 100 years after the crucifixion of Jesus, the Jews fought against Roman rule for a second time in what is known as the Bar Kochba Revolt. After the Romans defeated the rebellious Jews in 135, they renamed the land of the Jews Palestina to punish the Jews and to make an example of them to other peoples considering rebellion. The Romans took away the Jewish name, Judea, and replaced it with the name of an ancient enemy the Jews despised. The Philistines were an extinct Aegean people whom the Jews had historically loathed as uncultured and barbaric.

For example, a company that provides continuing education classes to people in a number of professional fields, including social work, was selling a syllabus that declared “Christianity is based on the life and teachings of Jesus Christ, a Jew who taught in Palestine . . .”

The company, which will not be named because it was responsible enough to correct the error as soon as it was pointed out, demonstrated a commitment to intellectual and historical integrity.

Sadly, not everyone shares this commitment. The notion that Jesus was a Palestinian and conducted his ministry in “Palestine” is a falsehood repeated many times in academic and polemical literature.

For example, in 2008, Orbis Press published Naim Ateek’s A Palestinian Christian Cry for Reconciliation, which reads in part, “In the first century Jesus was born under Roman occupation of his home country of Palestine.” “Palestine” was not Jesus’s home country and it is a lie to say so.

And in 2017, Orbis Press published Ateek’s A Palestinian Christian Theology of Liberation: The Bible, Justice, and the Palestine-Israel Conflict, which includes the line “Jesus Christ was a Palestinian as we are.” 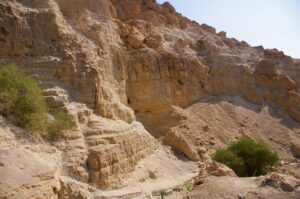 A portion of the Judean desert near the Dead Sea. (Photo: Dexter Van Zile)

Jesus was not a Palestinian. He was not born in Palestine, but in Bethlehem when it was part of Judea. This is made explicit in Matthew Chapter 2, which declares, “Now when Jesus was born in Bethlehem of Judea in the days of Herod the king, behold there came wise men from the East to Jerusalem.”

Jesus was born a Jew, lived as a Jew, died as a Jew, and according to authoritative Christian teaching, remains a Jew as he sits at the right hand of God. Under Christian doctrine, Jesus Christ has a human nature, which is Jewish, and a divine nature, which is universal and not connected to any one people group. The scandal of particularity, which offends so many, inheres in Jesus Christ himself.

Christians can either get over it or not. 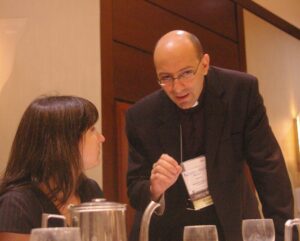 Rev. Dr. Mitri Raheb, a Lutheran pastor who runs a nonprofit in Bethlehem, is a persistent purveyor of the “Jesus was a Palestinian” canard used to deny that Jews are indigenous to the Middle East. (Photo: Dexter Van Zile)

Then there’s Rev. Dr. Mitri Raheb’s 2013 book Sailing Through Troubled Waters: Christianity in the Middle East, which falsely states, “Jesus Christ was born in Palestine, it is there that he taught, suffered, was crucified and resurrected,” and that “The first Christians communities originated in Palestine.”

Wrong again. Jesus was born in Bethlehem and grew up in Nazareth, two towns in Judea, preached in Galilee (an area inhabited by the Israelite tribe of Naphtali), and taught in Jerusalem, the capital of Israel. None of these areas were called Palestine until long after Jesus’s crucifixion.

To make matters worse, Raheb has worked to deprive Jews of their Jewishness. He did this in a book he edited and published through the Diyar Institute, a nonprofit he runs. The book is titled The Biblical Text in the Context of Occupation: Towards a new hermeneutics of liberation.

In this 2012 book, Raheb writes that his readers “should be careful when talking about the ‘return’ of the Jews, as if they are experiencing something of a homecoming to their original land.”

To buttress his portrayal of Jews as interlopers who really have no connection to the land of Israel, Raheb writes that “many of the Jewish emmigrants (sic) to Palestine were actually not the descendants of those native people who were exiled but mainly the descendants of North African Berber tribes or Eastern European ‘Khasar’ tribes who converted to Judaism. For them, Jerusalem was like Rome to the Catholics.”

The “Khazar” myth, which says that modern-day Jews, especially those living in Israel, aren’t really Jews and therefore have no legitimate right to live in the modern Jewish state, has been debunked numerous times.

What Raheb has done is promote the notions that Jesus was not a Jew but a Palestinian and that Jews aren’t Jews either. This is outrageous.

Problem on the Internet

Plug in “Jesus” and “Palestine” into any search engine you’ll find hundreds if not thousands of anachronistic references to Jesus being born in Palestine. The title of this website associated with the University of Helsinki is “Palestine in the Time of Jesus.”

The site declares, “Jesus came from the town of Nazareth in Galilee. This northern territory of Palestine was also his most important area of activity,” and “At the time of the birth of Jesus Palestine was ruled by the Roman vassal king Herod the Great . . .”

The same webpage also states that, “In the time of Jesus several large farms has (sic) grown up in Palestine and they restricted the livelihood of ordinary peasants.” Again, in the time of Jesus, the area in question was called Judea.

Anti-Israel activists have regularly portrayed Jesus as a Palestinian.

And Linda Sarsour, a Palestinian-American, declared on Twitter that “Jesus was Palestinian of Nazareth . . .” (No, he was a Jew of Nazareth.)

And this dishonest article by Hamid Dabashi, a professor at Columbia University, published by Al Jazeera in 2018 declares right in the headline, “Remember: Christ was a Palestinian refugee.”

Even the online version of Encyclopedia Britannica has gotten into the act, with this entry about “Jewish Palestine At The Time Of Jesus” which states that “When Jesus was born, all of Jewish Palestine—as well as some of the neighbouring Gentile areas—was ruled by Rome’s able ‘friend and ally’ Herod the Great.” The fact is, when Jesus was born, the area was not “Palestine.” (Oddly enough, Encyclopedia Britannica is currently soliciting advertisers with the slogan, “Truth Needs a Champion. Will it be You?” Such irony.)

In June 2020, the geniuses at Middle East Monitor published an article with a headline (or more appropriately “headlie”) that reads: “Israel disputes Jesus’ Palestinian origins.”

The article itself declares, “The birthplace of Jesus is also hotly contested, with arguments made that he was from first-century Roman province of Palestine, although he was born in Bethlehem and grew up in Nazareth, Galilee.”

This anachronism prompted a wag to leave the following in the comment section:

he was from first-century Roman province of Palestine[?] As in the 1st century after his death? As in he wasn’t even alive when this province of Palestine you mention was ever a reality? How can he be from a province that never existed in his lifetime? You’re essentially applying a colonial lens to this whole conversation.

And then some random website calling itself Arab America published an article by Emily Devereaux in December 2019 with the headline asking “Is Jesus Christ a Palestinian Superstar?” 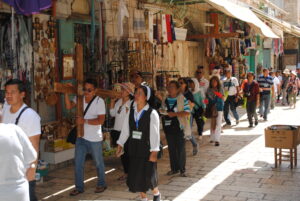 A Christian pilgrimage in Jerusalem, where Jesus taught and was crucified a century before the Romans applied the name “Palestine” to the region. (Photo: Dexter Van Zile)

Even St. George’s College, an Anglican school located in, of all places, Jerusalem the capital of the Jewish state of Israel, offers a tour with the title “Palestine of Jesus.”

One of the most outrageous efforts to strip Jesus of his Jewishness and deploy him as a symbol in the cause of anti-Zionism took place in late 2019 when Tafiq Tirawi, a member of Fatah’s Central Committee, posted a Christmas scene on Facebook and said that Christmas was the birthday of Jesus, “the first Palestinian and the first Shahid (Islamic Martyr).”

This is simply blasphemous for followers of Christ, but fortunately, Christians don’t lose their heads when confronted with such insults to their faith.

We could go on and on with examples of how Jesus is stripped of his Jewishness and deployed against the Jewish people and their state.

Why does it matter? Because as Amy-Jill Levine writes in her 2005 text The Misunderstood Jew, “Any writing that separates Jesus and his first followers from Jewish identity, associates these proto-Christians with the Palestinian population, and reserves the label ‘Jew’ for those who crucified Jesus and persecuted the church is not only historically untenable but theologically abhorrent.”

In other words, by stripping Jesus of his Jewish identity and turning his early followers into Palestinians, commentators reduce the Jews of first century Jerusalem into enemies of Jesus and therefore God. A narrative such as this has lethal consequences and must be countered.

It is time that authors, publishing houses, and institutions and church leaders stop trafficking in the canard that Jesus was a Palestinian.

It’s a clear insult to the rights of Jews as an indigenous people.