After twice in the past having corrected articles which erroneously associated Jesus and Palestine, The New York Times once again peddles this ahistorical falsehood. In an article about a novel featuring Jesus’ fictional wife, The Times’ Elisabeth Egan writes of “The Book of Longing” author Sue Monk Kidd:

For the first 14 months, Kidd did an exhaustive amount of research, a process she describes as “both tedious and wondrous.” She watched documentaries and immersed herself in books on Jesus and Palestine. (“Did Jesus Ever Tie the Knot? A New Novel Considers the Question“)

According to the website of Penguin Random House, which published Kidd’s book:

Though a work of fiction, this novel is grounded in meticulous research and written with a reverential approach to Jesus’s life.

In her own words, Kidd tells her Penguin Random House interviewer:

Researching a world that existed two thousand years ago was both overwhelming and exhilarating. For over a year, I filled notebook after notebook with research notes. I created storyboards, watched documentaries and videotaped lectures, and gathered and read a tiny library of books on a multitude of topics: the historical Jesus; ancient Jewish betrothal and marriage; the religious, cultural, political, and geographical background of first-century Palestine; scriptural commentary; biblical figures; biblical archeology; Egypt, the Roman Empire; and so on. 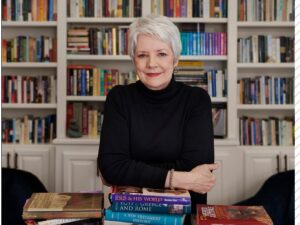 But for all her research, lost is the fact that during the time of Jesus, Bethlehem and Jerusalem were in what was commonly called Judea and Nazareth was in what was commonly called the Galilee. The land where Jesus lived did not take on the name Palestine until the second century, well after his death. Thus, the notion of “first-century Palestine,” as Kidd puts it, is totally fictional, despite her declared deep research on what she calls “historical Jesus.”

One only has to flip open the Christian bible to see references to Judea and Galilee. For example, in Luke 1:5, Herod (the Great) is “King of Judea.” In Luke 2:4, “And Joseph also went up from Galilee, out of the city of Nazareth, into Judea, unto the city of David, which is called Bethlehem.” In Luke 3:1, Pontius Pilate, “governor of Judea.” Not once in her lengthy interview with her publisher, though, does Kidd refer to Judea.

In 132 (Common Era or AD), approximately 100 years after the crucifixion of Jesus, the Jews fought against Roman rule for a second time in what is known as the Bar Kochba Revolt. After the Romans defeated the rebellious Jews in 135, they renamed the land of the Jews Palestina to punish the Jews and to make an example of them to other peoples considering rebellion. The Romans took away the Jewish name, Judea, and replaced it with the name of an ancient enemy the Jews despised. The Philistines were an extinct Aegean people whom the Jews had historically loathed as uncultured and barbaric.

As The New York Times wrote in a June 20, 2008 correction prompted by CAMERA:

The Malula Journal article on April 22, about efforts in the village of Malula, Syria, and two neighboring villages to preserve Aramaic, the language spoken by Jesus, referred incorrectly to the name of the region where Jesus spent most of his time. It was Galilee – not Palestine, which derives from the word Palestina, the name that Roman conquerors gave to the region more than 100 years after Jesus’s death. The error was pointed out by a reader in an e-mail message on Monday. 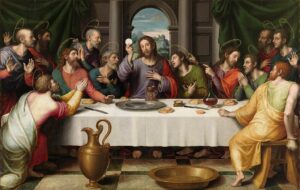 The Last Supper, depicted by Juan de Juanes, c. 1562 (Wikimedia, in the public domain in the United States)

As CAMERA explained at the time, the region in which Jesus spoke was known, including by its inhabitants, as Judea and not Palestine. The late preeminent scholar Bernard Lewis had noted that the word “Palestine” was sometimes used by Greek and Latin authors prior to 135 CE, though that appears to have normally been used as an adjective in apposition to “Syria” (Palaistine Syria or Syria Palestina) and in reference to the coastal area formerly inhabited by the Philistines. It was not used in reference to “Judaea,” a region that “in Roman times was still officially and commonly known by that name,” as Lewis explained, or the region around Nazareth (“Palestine: On the History and Geography of a Name,” The International History Review, Jan. 1, 1980).

More recently, The Times was compelled to correct an Op-Ed last year which had falsely asserted: “But Jesus, born in Bethlehem, was most likely a Palestinian man with dark skin.” The April 27, 2019 correction stated:

Because of an editing error, an article last Saturday referred incorrectly to Jesus’s background. While he lived in an area that later came to be known as Palestine, Jesus was a Jew who was born in Bethlehem.

“You have written several memoirs, as well as other books of fiction, and The Book of Longings is a real melding of those worlds,” Penguin Random House muses in its interview with Kidd. It seems that The Times, too, melds fact and fiction by once again promoting the myth remaking Jesus as Palestinian.

CAMERA calls on The Times to once again correct the ahistorical association. Stay tuned for an update.