Just over a year after The New York Times completely fabricated the history of the 1948 exodus of many of Jaffa’s Arabs, falsely claiming “most” “were forcibly removed,” the Gray Lady turns its inventive sights to another large city whose Arab residents evacuated due to the actions of their own leadership: Haifa. Thus, in a feature about Israeli painter Naomi Safron-Hon, whose textured works focus on abandoned homes, Seph Rodney wrote for The Times:

The images document where [Safron-Hon] grew up: Haifa, a coastal town on the Mediterranean in Israel where Palestinian and Arab citizens of the town were forced to leave or escaped during the 1948 Arab-Israeli War. (“Paintings that Demolish the Myths of What a Home Should Be“)

Safron-Hon, a conscientious objector who refused to join the Israeli army (“I wanted to leave; I didn’t like Israel, I didn’t like the politics there; I felt the oppression, the conflict,” is someone who has given a lot of thought to the question of myths versus truth.

In terms of the painting, there’s a sense of an illusion. I’m interested in the myth. The creation of a world within a canvas. I take photographs from this neighborhood in Haifa and bring it back to my studio in Brooklyn and I destroy the photograph in the process of making my paintings. I mix this idea of what is the truth with cement and lace, so if I’m using the real material in the painting, then what is the truth? Where is the fiction?

Where I come from, there’s so much myth building. In building a nation, you have to create a sense of mythology. How do we manipulate the story in order to create an ideology? And I think the paintings try to question the viewer, what do you see as real? 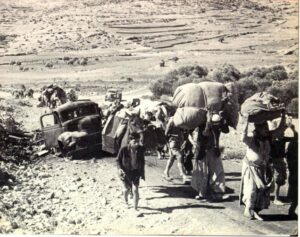 While art by nature allows for subjective experience of myth versus reality, experimenting and blurring the two realms, journalism does not. Thus, The New York Times is not free to report in 2020 that “Arab citizens of [Haifa] were forced to leave or escaped during the 1948 Arab-Israeli War” if the historical record, including The Times’ own reports from that period, proves otherwise. (“Escaped,” of course, signals danger for those who stayed behind. While Haifa was the site of intense battle including bombings from both sides, and such violence naturally poses dangers to civilians on both sides, there was no danger uniquely targeting Arab residents forcing them to leave or escape.)

Indeed, an extensive review of New York Times coverage from that period turns up no indication of forced expulsion of Haifa’s Arabs, no Jewish effort to drive them out. Indeed, according to The Times reports, it was the Arab leadership which opted for the evacuation of the Arab residents of the northern city when the Haganah gained control of the city. The Times’ April 23, 1948 article stated:

Tens of thousands of Arab men, women and children fled toward the eastern outskirts of the city in cars, trucks, carts and afoot in a desperate attempt to reach Arab territory under the Jews captured Rushmiya bridge leading toward Samaria and northern Palestine and cut them off. Thousands rushed every available craft, even rowboats, along the waterfront, to escape by sea toward Acre. . .

The complete evacuation of the Arabs from Haifa began tonight with the assistance of British army transports, the Haganah’s radio reported in the last broadcast. . . .

The meeting between the Haganah and the Arab commanders, in the presence of the British military commander and the district commissioner, took place at 6 P.M. at the City Hall, the broadcast said. The Arab commander departed to consult his colleagues and returned an hour and a half later, when evacuation was decided upon in lieu of of the immediate application of truce terms.

The Jews earlier had issued a cease-fire order and submitted the following surrender terms:

1) The laying down of all arms and the surrender of them to the Jews.

2) The deportation of all foreign Arab fighters from Haifa.

3) A twenty – four – hour curfew, during which the Jews would carry out the disarming.

4) All the Germans and Nazis in the Arab ranks to be handed over.

5) Freedom of movement for all and the end of sniping and roadblocks.

6) Safety of all citizens to be guaranteed by the Haganah. (Emphases added.)

Thus, while the article carried the heading “Jews Seize Haifa in Furious Battle; Arabs Agree To Go,” the article itself made clear that the Haganah offered safety to all citizens, while the Arab leadership nevertheless decided to evacuate. The Zionists demanded the deportation only of foreign Arab fighters along with Germans and Nazis who had joined the Arab forces. 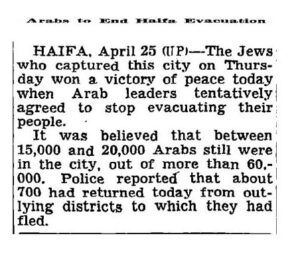 Indeed, a Times brief (at left) published three days later made abundantly clear that the evacuation of the Arab residents was a decision taken by their own leaders. The brief, entitled “Arabs to End Haifa Evacuation,” stated:

The Jews who captured this city on Thursday won a victory of peace today when Arab leaders tentatively agreed to stop evacuating their people.

It was believed that between 15,000 and 20,000 Arabs still were in the city, out of more than 60,000. Police reported that about 700 returned today from outlying districts to which they had fled.

a tearful plea by the town’s Jewish mayor, Shabtai Levy, for the leaders to reconsider. The Haganah’s chief representative in Haifa also assured the Arabs that if they stayed, “they would enjoy equality and peace, and that we, the Jews, were interested in their staying on and the maintenance of harmonious relations.” The British commander in Haifa, Hugh Stockwell, emphatically insisted that the Arabs were making a mistake, and also urged them to change their decision, which reportedly came from the Arab Higher Committee in Beirut.

Even as Haifa’s Arabs were streaming out of the city on British boats and trucks, the Jewish establishment continued to urge an end to the exodus and to insist that those who had departed should return. “[E]very effort is being made by the Jews to persuade the Arab populace to stay and carry on with their normal lives,” reported the British Superintendent of Police. A member of the Arab National Committee, Farid Saad, admitted that Jewish leaders “have organized a large propaganda campaign to persuade [the] Arabs to return.”

The historical record also shows that prior to the Haganah’s victory in Haifa, it was the Arab leadership which urged the evacuation of the city’s Arabs, while the Jewish and British leadership called on the civilians to stay. The early exodus of the Arab elite, at times before the fighting even started, also fueled the flight, particularly from Haifa. As the British High Commissioner for Palestine, Sir Alan Cunningham, wrote in an April 26, 1948 telegram:

In Haifa the Arab members of the municipality left some time ago; the two leaders of the Arab Liberation Army left actually during the recent battle. Now the Chief Arab Magistrate has left. In all parts of the country the [elite] effendi class has been evacuating in large numbers over a considerable period and the tempo is increasing.

As previously recounted by CAMERA’s Ini:

After Haifa’s chief Arab magistrate abandoned that city, a British intelligence report described the act as “probably the greatest factor in the demoralization of Haifa’s community.” . . .

Palestinian leaders also explicitly instructed Palestinians to leave their homes. The Grand Mufti of Jerusalem, Haj Amin al Husseini, told a delegation of Haifa Arabs in January 1948 that they should “remove the women and children from the danger areas in order to reduce the number of casualties,” and continued to encourage evacuations in the months that followed.

The New York Times archives do turn up an account of the seizure of the home of one Haifa resident: the British authorities seized the home of a Holocaust refugee from Germany who was visiting the United States, where he died. The Times reported about the death of Alfred Hircsh (“Haifa Home Seized; Visitor to [New York] City Dies,” Feb. 8, 1947):

He death occurred after he received news that his residence on Mount Carmel, Haifa, had been seized by British soldiers who evicted his son and daughter, according to his brother-in-law’s wife. . .

When it comes to manipulating the story in order to create an ideology, as artist Safron-Hon puts it, The New York Times excels to a tee. Even the paper’s own previous coverage documenting that story as it actually happened poses no obstacle to manipulation in the service of ideology.