On April 26, 1948, General Sir Alan Cunningham, the British High Commissioner for Palestine, wrote to Arthur Creech-Jones, the Colonial Secretary, about the mass flight of Palestine’s Arabs, singling out the port city of Jaffa:

You should know that the collapsing Arab morale in Palestine is in some measure due to the increasing tendency to those who should be leading them to leave their country. For instance in Jaffa the Mayor went on 4 days leave 12 days ago and has not returned, and half the National Committee has left. In Haifa the Arab members of the municipality left some time ago, the two leaders of the Arab Liberation Army left actually during the recent battle. Now the Chief Arab Magistrate has left. In all parts of the country the effendi class has been evacuating in large numbers over a considerable period and the tempo is increasing. (Cunningham Papers, 111/4/71, p. 189, cited in Efraim Karsh’s Fabricating Israeli History).

Fast forward 71 years. Contradicting both the High Commissioner and Jaffa Arabs who lived through the events, editors of The New York Times in Manhattan this weekend rewrote history, stating in a travel article which appeared in yesterday’s print of “The Paper of Record”:

In 1948, when the State of Israel was founded, most of Jaffa’s Arab residents were forcibly removed from their homes. (“An Unexpected Pocket of Luxury in Tel Aviv,” March 17).

The original digital version by Debra Kamin did not include this false claim. Rather, in response to criticism that the article initially ignored the city’s Arab history, editors revised the digital version, adding in this misinformation.

In addition, the following editors’ note, which was appended to the bottom of the article itself, also appeared not once, but twice, in print (in a slightly altered version), on March 17 as a correction (page 4), and on March 16 as an Editors’ Note (page 22):

The original version of this article, in focusing exclusively on the high-end hotels and other additions, failed to touch on important aspects of Jaffa’s makeup and its history — in particular, the history and continuing presence of its Arab population and the expulsion of many residents in 1948. Because of this lapse, the article also did not acknowledge the continuing controversy about new development and its effect on Jaffa. After readers pointed out the problem, editors added some of that background information to this version.

Leaving aside for a moment the factual problem with the Editors’ Note, the fact that it appeared at all in print (let alone twice) is noteworthy. We recall that The New York Times flatly refused to publish in print an Editors’ Note after the paper whitewashed convicted terrorist Rasmeah Odeh as a “controversial Palestinian activist.” Odeh was found guilty for her role in a Jerusalem bombing which killed two Hebrew University students and was later deported from the United States for having lied about her criminal past. What were the editorial considerations which prompted Times editors to run the Editors’ Note on Odeh only online while the misinformation had appeared also in print, and, in contrast, to share the (false) Jaffa Editors’ Note in print – twice – although the alleged misinformation had never appeared in print?

As for the content of the “correction,” most of Jaffa’s Arab residents fled in 1948 – and were not forcibly removed. 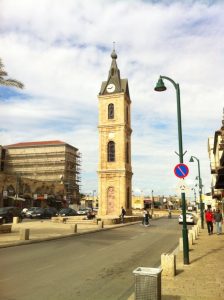 In City of Oranges: An Intimate History of Arabs and Jews in Jaffa (W.W. Norton & Co), journalist Adam LeBor detailed the flight of Jaffa’s Arabs. LeBor, a journalist who has written for The Independent and The Times (London), and has, interestingly, also published a number of book reviews at The New York Times, reported in his book on Jaffa:

On 8 December 1947, after several days of skirmishes between Arab fighters and the Haganah, hundreds of Arab fighters attacked the Tel Aviv quarter of Hatikvah in a major frontal assault. The attack was repulsed, with sixty Arabs and two Jews killed. The Arab exodus from Jaffa began. Much of the middle class and the a’yan, who could have provided leadership in the testing days ahead, relocated to relatives or to their summer homes in Cairo and Beirut, believing the would return once the situation calmed down. Flight, like panic, is infectious. When Jaffa’s artisans and workers saw that their bosses were leaving, they too began to desert their homes. The Haganah’s intelligence service reported that inhabitants of Manshiyyeh and Abu Kabir, to the south, were moving out of the city, pushing handcarts full of their possessions. (page 114)

The next month, after a deadly attack targeting the Arab High Committee but which took the lives of 26 mostly civilians, LeBor said:

The exodus of the middle class further accelerated, angry accusation of abandoning Jaffa following in their wake. ‘Whoever could leave [Jaffa] has left, there is fear everywhere, and there is no safety,’ an Arab informant told Elias Sasson, head of the Jewish Agency’s Arab Affairs department, in January 1948.

LeBor recounts the fateful day of Sunday, April 25, 1948, when fighting for Jaffa itself began. He tells of the flight of the Hammami family, and son Fadwa remembers:

In one day, my parents decided to leave. But not for good, because we left everything in the house. They said we were going on holiday, to Lebanon . . . (page 125):

For Ismail Abou-Shehade, too, the memories of the exodus are unforgettable. ‘If you ask me about this time, I can tell you abou it, like it happened an hour ago. I can still see the people leaving, the women and children shouting, “To the sea, to the sea!”

In addition, LeBor reports about Jaffa’s Arab mayor at the time, Yousef Heikal, who himself abandoned the city:

Heikal returned on 28 April. “Then he gathered us again. He said that Jaffa was going to be occupied by the Jews soon, since there was no defence — no weapons — and nothing could stop them from taking our dear Jaffa. He then gave people permission to leave the country if they wished. He said that he himself was leaving with his family. People then started to leave by ships and trains. All the routes to the Arab countries were opened, and people could leave for free. The Arab countries were responsible. After a week there was nothing left but cats and dogs. We few families who stated went to live in the orange groves.”
Too scared to remain in Jaffa once the British departed, thousands more left at the beginning of May, either by sea or with the help of the British as they cross the Haganah lines.

LeBor’s detailed book contains considerable description of the Arab flight from Jaffa, and no indication of any forced expulsions. Historian Dr. Petra Marquardt-Bigman has noted that Ibrahim Abu-Lughod, a political science professor who left Jaffa in May 1948 (and was also quoted by LeBor), likewise documented the flight of Jaffa’s Arabs. He wrote in an Al-Ahram special from 1998 that the Arab National Committee levied a tax on those who left, an exodus which began with the wealthy. He himself volunteered to help collect the fee:

I worked in a branch of the committee based in the headquarters of the Muslim Youth Association near the port of Jaffa. Our job consisted mainly of harassing people to dissuade them from leaving, and when they insisted, we would begin bargaining over what they should pay, according to how much luggage they were carrying with them and how many members of the family there were. At first we set the taxes high. Then as the situation deteriorated, we reduced the rates, especially when our friends and relatives began to be among those leaving.

We continued collecting this tax until 23 April, when the combined force of the Haganah and the Irgun succeeded in defeating the Arab forces stationed in the Manshiya quarter adjacent to Southern Tel-Aviv. On that day, as we realised that an attack on the centre of Jaffa was imminent, I and my family decided that they had to be evacuated temporarily. We rented a van, into which we crammed all the women and young children and sent them to Nablus.

On what basis does The New York Times report that “most” of Jaffa’s Arabs were “forcibly removed”? What historical documentation substantiates an allegation that was contradicted by Arab eyewitnesses?