After CAMERA informed the editor of the problems detailed here, Foreign Policy partially corrected its piece so that it no longer misstates the extent of destruction during Operation Guardians of the Wall. See below for a detailed update.

The publication Foreign Policy managed to end 2021 on a low note when it comes to accuracy and honest analysis. The magazine managed to pack an impressive amount of falsehoods and distortions in fewer than 600 words in its December 29, 2021 article “10 Conflicts to Watch in 2022.” Unfortunately, it is not the first time the magazine has been caught inventing facts. Shockingly, this time the disconnect from reality was coauthored by the President and Executive Vice President of the think-tank International Crisis Group, Comfort Ero and Richard Atwood.

The errors begin in the very first sentence, where the authors claim: “This past year saw the fourth and most destructive Gaza-Israel war in just over a decade…” If by “most destructive” they mean in terms of lives, then the claim is wildly incorrect. According to the United Nations, about 256 Palestinians were killed in May 2021. In contrast,  the UN’s Office for the Coordination of Humanitarian Affairs (“OCHA”) claimed 2,131 Palestinians were killed during Operation Protective Edge in the summer of 2014.

If the authors meant in terms of property damage, the claim is still wildly inaccurate.  During Protective Edge in 2014,  OCHA estimated that at the peak, there were over 500,000 displaced Gazans and an estimated 18,000 “housing units” had been destroyed or severely damaged. Compare that to OCHA’s estimates at the end of the May 2021 war, which suggested about 107,000 displaced Gazans at the peak and 1,042 “destroyed housing and commercial units in 258 buildings.”

Either way, Foreign Policy manages to get the facts seriously wrong in just the first sentence, and it doesn’t get any better from there.

While the magazine opens with a blatantly false claim, the authors simultaneously accuse Israel of making baseless claims, all while ignoring the abundant evidence to the contrary that was available to them. They write that Israel “outlawed six respected Palestinian civil society groups on specious terrorism charges.”

Just because the authors apparently didn’t bother to look does not mean the evidence isn’t public and widely available.

Earlier this month, the Netherlands ceased funding for one of those six “respected” groups after an investigation (which could only rely on publicly-available information – not classified information) found 34 of the organization’s employees had ties to the internationally-designated terrorist group Popular Front for the Liberation of Palestine (“PFLP”). The investigation also found that several other Palestinian organizations could be viewed as "the social branch of the PFLP,” and the Dutch government has indicated it will look into other such groups.

Incomplete Explanations of the Conflict’s Causes

The authors claim “[t]he trigger for this latest outbreak was occupied East Jerusalem,” pointing to the Sheikh Jarrah/Shimon HaTzadik property dispute and the clashes that had occurred in Jerusalem in April and early May.

For one, pinning a war entirely on a property dispute being settled in court is patently absurd. More so because preceding the launching of rockets by Hamas, Israel took numerous steps to calm related tensions. The Israeli Attorney General “asked the Supreme Court to postpone the hearing on the petition of Sheikh Jarrah residents.” The government closed the Temple Mount for Jews, and the Prime Minister ordered a change to the May 10th Jerusalem Day Flag Parade. 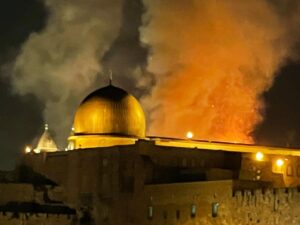 Trees on fire send smoke skyward by the Temple Mount compound after being lit by fireworks launched by Palestinian rioters on May 10, 2021.

The authors also curiously ignore a major event: the Palestinian Authority’s cancelation of elections scheduled for May 22. Polls had been showing that the PA’s president, Mahmoud Abbas, would have almost certainly lost to Hamas’ leader Ismail Haniyeh, and parliamentary elections saw an exceptionally tight race. As Jonathan Schanzer, Senior Vice President for Research at the Foundation for Defense of Democracy, explained, the cancelation of elections thus left Hamas as the most aggrieved party and it was thus “eager to demonstrate its leadership to the Palestinian people.” The authors’ thin explanation is also completely divorced from the important regional context, particularly the ongoing “war between wars” being waged by Israel and Hamas’s main sponsor, the Islamic Republic of Iran.

In this context, the authors also refer to “clashes during Ramadan between stone-throwing youth and Israeli police using lethal force on the compound that comprises the Haram al-Sharif, holy to Muslims, and the Temple Mount, holy to Jews.” While reports from the scene mentioned the use of stun grenades and rubber-coated bullets, to this author’s knowledge there are no reports of “lethal force” having been used. Nor do the Foreign Policy authors provide any evidence for their claim.

Omitted by Foreign Policy is the campaign of incitement that preceded the war. Importantly, the “clashes during Ramadan” were not just between “stone-throwing youth and Israeli police” but involved deadly, violent incidents. Beginning on April 15, Palestinian social media became filled with videos of a new trend: assaulting visibly Jewish bystanders. On April 23, a Jewish driver was attacked and beaten by an Arab mob. Rockets were fired by Gazan terrorists on April 23rd, 24th, 25th, and 28th. Incendiary and explosive balloon-borne devices were launched on multiple occasions from Gaza. Arab rioters attacked and stabbed a young man near the Temple Mount on May 9th. At least two other stabbing attacks were carried out on April 30th and May 2nd. A Hamas shooting attack on Israeli border guards was carried out on May 7th.

Notably, while Israeli leaders were working to calm the situation, the Palestinian leadership was stoking the embers in a campaign of incitement over Jerusalem. When, on May 2, Palestinian terrorists shot three yeshiva students, killing one, both Hamas and Fatah leaders were calling the attack “heroic.”

While one certainly can point to the property dispute in Sheikh Jarrah/Shimon HaTzadik as a factor in the conflict, the attempt to reduce the entire conflict into such a simplistic narrative and ignore the many other relevant factors does an enormous disservice to any Foreign Policy readers interested in analyzing the conflict.

The authors then go on to make another confusing and highly partisan claim:

That set off a chain reaction. Hamas, which controls Gaza, fired long-distance rockets indiscriminately into Israel. Israel responded with a harsh aerial assault, sparking an 11-day conflict that killed more than 250 people, almost all Palestinians, and left in ruins what remained of Gaza’s civilian infrastructure. West Bank Palestinians demonstrating in solidarity were met with the Israeli army’s live fire. In Israeli cities, Palestinian citizens took to the streets, sometimes clashing with West Bank settlers and other right-wing Jews, often supported by Israeli police.

Where to begin? It’s unclear what exactly the authors are even attempting to reference. What do they mean by “Israeli cities” and “Palestinian citizens?”  By “Palestinian citizens,” do they mean those living under the Palestinian Authority and Hamas, or are they nonsensically referring to Arab Israelis? Are they referring to the Arab riots in the so-called “mixed cities” – which are not in the West Bank? As CAMERA has already detailed in regard to those incidents:

Furthermore, what do the authors mean by “West Bank settlers and other right-wing Jews?” The implication seems to be that to be a West Bank settler is to be a “right-wing Jew.” It seems Foreign Policy is trying to paint broad, confusing strokes to erase the nuance and detail needed to accurately understand what happened in May. That these strokes work to paint one side in a negative fashion betrays an obvious bias that exists throughout the piece.

Reversing Chronology to Cast Israel’s Reactions as the Causes

The authors also manage to blame the Palestinian political divide on Israel, claiming “the war provoked no rethink of Israel’s Gaza policy—economic strangulation to weaken Hamas and divide Palestinians.” Presumably “economic strangulation” is a hyperbolic reference to the Israeli and Egyptian blockade of the Gaza Strip to stem the flow of weapons and certain dual-purpose items into the hands of Hamas and other terrorist groups while still allowing other basic and humanitarian goods to flow.

The attempt to link this policy to the Palestinian political divide is, of course, groundless. Hamas violently took over the Gaza Strip in June 2007. Israel did not institute restrictive policies on land crossings until after the takeover, and the notice to mariners of the maritime blockade was only issued on January 3, 2009. Notably, even according to the UN’s “Palmer-Uribe Report,” the blockade is not unlawful. Foreign Policy simply tried to reverse the chronology to turn Israel’s response into the cause of the political divide.

The next bit of highly partisan commentary gets to the crux of the problem with the entire piece. The authors seem to believe that Hamas and PIJ are like leaves in the wind, powerlessly drifting as Israel has its way with them. This perception perfectly embodies what former U.S. National Security Adviser H.R. McMaster calls “strategic narcissism,” which he describes as “the tendency to define challenges to national security as we would like them to be and to pay too little attention to the agency that others have over the future.”

So when the authors refer to “Netanyahu’s belligerence” and suggest the solution is to “end Israeli impunity” with nary a word for the actions of and the responsibility of many the most important players like Hamas, PIJ, Iran, and the Palestinian Authority have over the conflict, it demonstrates a careless (or highly partisan) analysis. That the piece also contains lines that downplay the anti-Jewish violence that occurred in May (“Palestinians, for the first time in decades, transcended their fragmentation by joining voices across the West Bank, East Jerusalem, Gaza, and Israel itself”) and even tiptoe the line of justifying Palestinian terrorism (“Most Palestinians have lost faith they will win statehood through negotiations”) makes it all the more transparent.

After CAMERA informed editors of the inaccurate claim that the May 2021 conflict was the most destructive of the four recent conflicts between Hamas and Israel, the newspaper published the following correction:

Correction, Jan. 27, 2022: A previous version of this article incorrectly characterized the extent of destruction in the 2021 Gaza-Israel war.

We commend Foreign Policy for making this partial correction. However, the correction fails to address the other issues articulated above, and in particular continues to inaccurately claim "lethal force" was used in April 2021 on the Temple Mount.